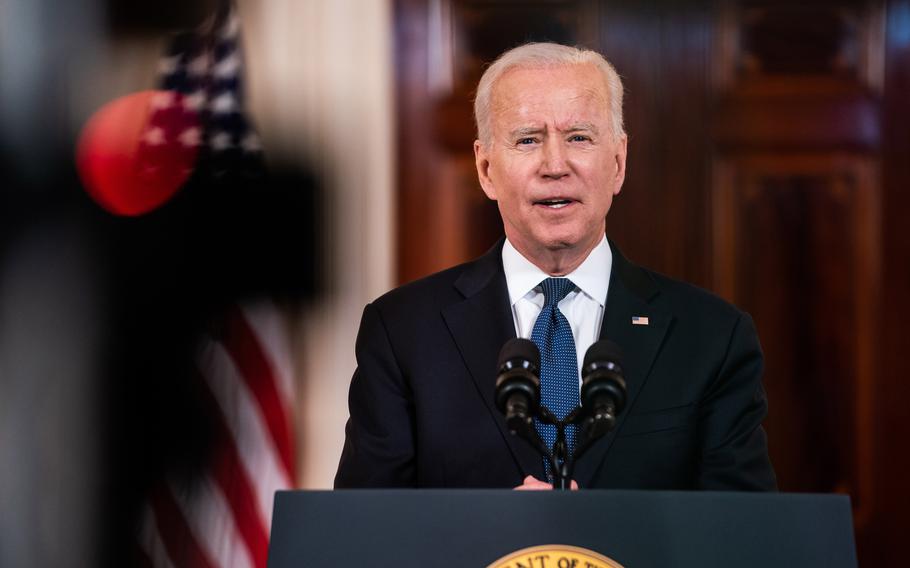 President Biden delivers remarks in the Cross Hall of the White House on May 20. (Demetrius Freeman/Washington Post)

The Biden administration on Friday carried out its first fast-track deportation flights to Central America, but many families were abruptly removed from passenger manifests after testing positive for the coronavirus or having been exposed to an infected person, according to Department of Homeland Security officials.

Biden officials announced Monday they planned to resume “expedited removal” flights following another sharp increase this month in the number of Central American families crossing into the Rio Grande Valley of South Texas. The explosive spread of the virus’s delta variant in Texas and along the southern U.S. border has intensified pressure on the administration to ramp up enforcement.

Two deportation flights operated by U.S. Immigration and Customs Enforcement departed Brownsville, Tex., with 73 family members, according to DHS officials, far fewer than the 147 adults and children who were originally slated to travel.

“The expedited removal process is a lawful means to securely manage our border, and it is a step toward our broader aim to realize safe and orderly immigration processing,” DHS said in a statement.

ICE filled most of the open seats with single adult migrants who tested negative for the coronavirus, said the officials, who were not authorized to discuss details of the flights. One plane went to Guatemala and the other to Honduras and El Salvador.

Authorities carried out the deportations using a procedure known as Electronic Nationality Verification that allows them to determine migrants’ country of origin through biometric information-sharing programs. The procedure, also known as “no-doc flights,” allows ICE to deport migrants who cross the border without passports or identification.

Since the pandemic began, border authorities have relied on an emergency public health law known as Title 42 to quickly return most Central American migrants to Mexico. The Biden administration has declined to use Title 42 to return unaccompanied minors, who have arrived in record numbers this year. The percentage of families being sent to Mexico each month has steadily declined in recent months, but Biden officials continue to use the authority to expel most single adult migrants.

Immigrant advocates say the Title 42 expulsions deny migrants their legal right to seek asylum in the United States, but the Biden administration’s preparations to end it have been stalled by the rising number of infections in Mexico and many U.S. states. Health officials in Texas reported more than 10,000 new cases this week, the most since early February.

“Asylum and other legal migration pathways should be readily available to those who need them, and this Administration is committed to fairly and efficiently considering asylum claims,” the DHS statement said. “Consistent with that approach, the Department of Homeland Security today resumed expedited removal flights for certain families who recently arrived at the southern border, cannot be expelled under Title 42, and do not have a legal basis to stay in the United States.”

The surging caseload accompanies a large new influx of Central American families into South Texas. More than 20,000 parents and children were taken into custody last week in the Rio Grande Valley, leaving Border Patrol facilities and migrant shelters overwhelmed. The humanitarian organizations that assist families released from U.S. custody have struggled to find enough shelter space to accommodate the growing number testing positive for the coronavirus.

U.S. Customs and Border Protection officials do not test migrants for the virus, but those transferred to ICE custody generally do get screened. Migrants facing deportation must test negative before they can board deportation flights, and those who test positive are required to go into quarantine and show a negative test result before they can be sent home.

President Joe Biden’s Republican critics have increasingly attempted to blame the president’s border policies for exacerbating the pandemic. Local residents in one South Texas community called police this week to report a migrant family with visible signs of illness eating in a fast-food restaurant.

On Wednesday Gregg Abbott, Texas’s Republican governor, issued an order threatening to impound the vehicles of anyone transporting migrants suspected of carrying the virus, a measure that prompted threats of legal action Thursday from Attorney General Merrick Garland.

Apprehensions of migrant families — including those with infant children — have risen steadily this year despite the Biden administration’s exhortations that parents should not risk their children’s lives to make the dangerous journey to the United States.

But the Biden administration has also relaxed some restrictions for families, making it easier for them to gain entry. Officials stopped detaining families for weeks at a time and instead are using “staging centers” in Texas to process families and release them within 72 hours to await an immigration court hearing. So many families are arriving that ICE is also housing them in a string of hotels near the border.

Apprehensions of families rose from nearly 7,300 in January — when 62% were expelled from the United States — to 55,800 in June, when 14% were expelled, Customs and Border Protection figures show.

Migrants who test positive for COVID-19 are generally held for a 10-day quarantine before being released, according to an ICE report filed July 23 in a federal court case that governs the treatment of migrant children in federal custody.

As of July 16, more than 2,300 migrant family members had tested positive since the pandemic began. More than 80% arrived already infected, according to the court filing.

An ICE official said in the filing that the agency is attempting to release children and parents “without unnecessary delay,” and that the speed by which they are being processed and released “has increased significantly.”

A snapshot of the families in ICE custody on July 16 showed that the agency was holding more than 700 children with their parents, including 451 children ages 5 and under. Nearly 30% were from Honduras, while 18% were from Guatemala and 17% from Ecuador. Others were from Nicaragua, El Salvador, Brazil, Venezuela, Chile and Cuba.