AstraZeneca aims to file for US COVID vaccine license this fall 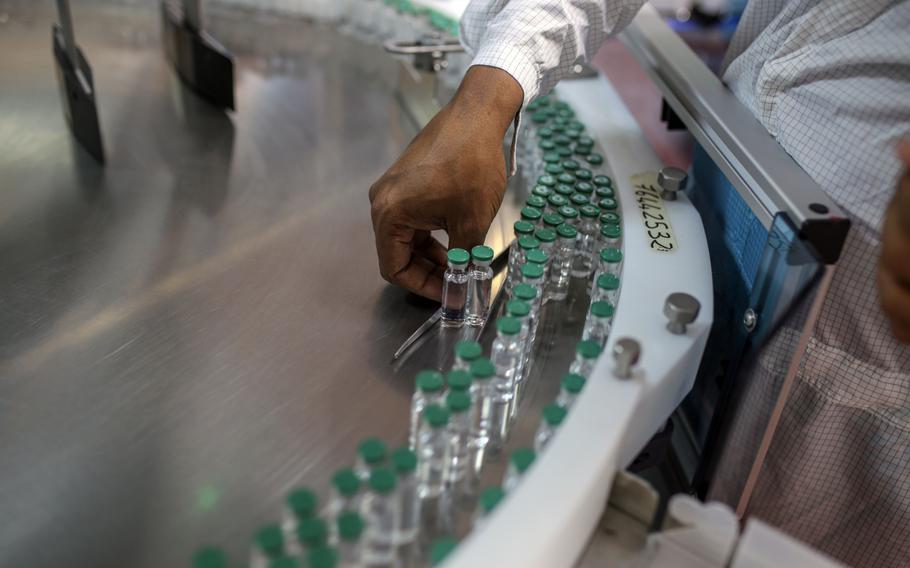 Covishield, the local name for the AstraZeneca vaccine, on the production line at Serum's plant in Pune, India, in Jan. 2021. (Dhiraj Singh/Bloomberg)

AstraZeneca won't seek a U.S. license for its COVID-19 vaccine until the autumn at the earliest, according to its chief executive officer, falling further behind rivals whose shots secured emergency authorizations.

The company plans to file an application to the U.S. Food and Drug Administration in the next two to three months, CEO Pascal Soriot said in a Bloomberg TV interview Thursday, adding that he hopes to gain approval "relatively quickly."

News of the delay comes as Astra is mulling the next steps for its vaccines business, according to a person with knowledge of the situation, who didn't want to be identified because the discussions are private.

Ruud Dobber, Astra's biopharmaceuticals president, said in an interview with Reuters Thursday that the company was "exploring different options" and would have more clarity before year's end. Although his comments raise the prospect of a sale, spinoff or partnership, Dobber said only that talks were at an early stage and had not been discussed with the board.

Beyond a nasal flu spray, Astra doesn't have a vaccines business outside COVID. In an interview with Bloomberg last year, Soriot said that if the coronavirus shot was successful the company would consider whether it should move further into vaccines and had "a few ideas of what we could do."

Astra, one of the first vaccine developers out of the gates, had originally targeted the quicker U.S. emergency-use authorization, with plans to file by mid-April. But questions surrounding the company's U.S. clinical trial results slowed the process as others such as Pfizer and Moderna raced ahead. The company was forced to restate its trial efficacy figure days after publishing initial results in March after the study's data safety monitoring board accused Astra of presenting outdated information.

With three COVID-19 vaccines already approved in the U.S., "there's no emergency need anymore," Soriot said. "Right now our focus is to produce vaccine for the low- and- middle-income countries."

The drugmaker has supplied about 1 billion doses to more than 170 countries. Sales of the vaccine totaled almost $1.2 billion for the first half of this year. While Astra hasn't taken a profit for the shot, committing to providing it at cost throughout the pandemic, peers such as Pfizer are getting a considerable bump. The U.S. pharma giant said this week it expects its COVID vaccine to bring in $33.5 billion in revenue this year.

Soriot told Bloomberg TV the drugmaker is "not there yet" on switching the vaccine to a for-profit model. When the pandemic has ended and Astra increases its prices it will do so on a tiered basis, with low- and- middle-income countries paying less than wealthier ones, he said.

Astra is also working on a potential booster COVID-19 shot that could better respond to variants with the University of Oxford — although it's less adamant than Pfizer that one will be needed. Because many people got their second shots only a few months ago, it isn't clear how long the vaccine will protect people, Soriot said. The first study on Astra's booster, focused on the U.K., should deliver early results in the autumn.

Soriot's comments came after Astra raised its earnings and sales forecast for the year. The forecast doesn't include the COVID vaccine. Astra expects core earnings of $5.05 to $5.40 per share following the acquisition of rare-disease specialist Alexion Pharmaceuticals. The company now expects revenue to climb by a low-20s percentage.

Although the drugmaker boosted its forecast, it reported earnings for the second quarter that fell just short of analyst estimates. The shares were little changed in London trading.

Winning clearance for a full U.S. license takes longer because the process requires more data, according to Soriot. The pre-application meeting with the FDA has yet to take place.