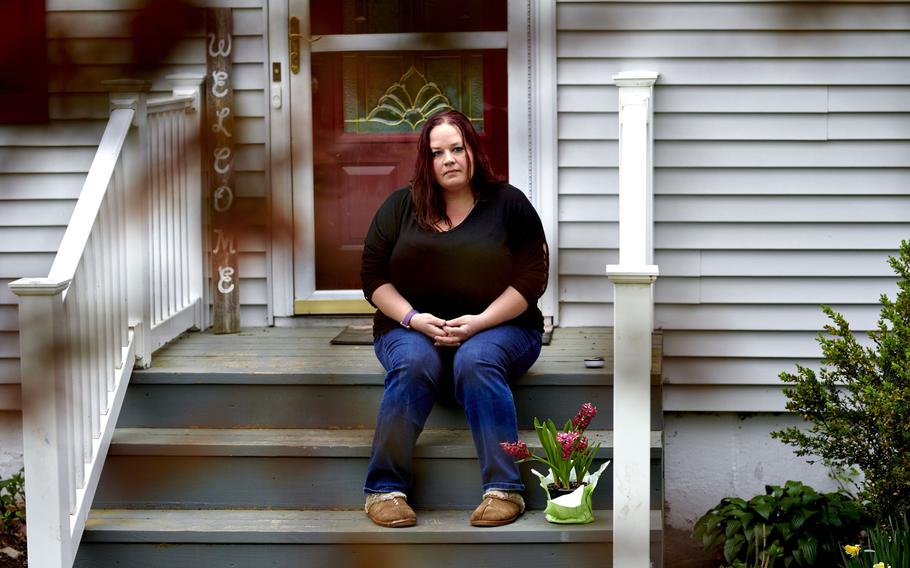 Tasha Clark, who suffers from Long COVID, sits on the steps of her home in Milford, Conn., on May 3, 2021. (Gabby Jones/Bloomberg)

But Heather Snyder, the Alzheimer's Association's vice president of medical and scientific relations, cautioned that while the findings from three studies are a step toward understanding how COVID-19 affects the brain, more research is needed.

"If you have COVID, it doesn't necessarily mean you're at an increased risk for dementia or Alzheimer's," she said. "We're still trying to understand what that relationship is."

Gabriel de Erausquin, a professor of neurology at UT Health San Antonio, led a study attempting to determine whether and when cognitive problems might persist among COVID-19 patients. More than 400 Argentine adults 60 or older who had tested positive for the virus participated in the research.

De Erausquin's team assessed the patients three to six months after they were infected with the coronavirus, measuring factors such as cognitive abilities, emotional reactivity, motor function and coordination. For example: Could the patients recall names and phone numbers, or where they put things? Could they retrieve the right word at the right time?

He was most struck by three findings: One, he said, was the frequency with which people who had been exposed to the coronavirus had subsequent problems with memory. About 60% had cognitive impairment, and for 1 in 3, the symptoms were severe.

Second, his findings indicate that the severity of a COVID-19 patient's illness does not predict cognitive problems. "What puts you at risk of having the cognitive problems is just having been infected, regardless of how badly ill you were," he said. "You may have had very mild COVID, but if you were infected and you are older, you are at risk of having these issues."

And, third, losing the ability to smell, which has been commonly reported among COVID-19 patients, is correlated with cognitive troubles. "They track together quite well," de Erausquin said. "The more severe your lack of smell, the more severe your cognitive impairment." (The olfactory nerves, which control your ability to smell, are the only ones directly connected to the cerebrum, the largest part of the brain. Nerves for the other senses go through the thalamus, which relays their signals to the cerebral cortex.)

De Erausquin added that it is too soon to know whether coronavirus-induced cognitive changes will be permanent or might reverse. "We don't know if this is progressive," he said. "We don't know if this is going to continue to get worse over time or if it might improve or if it will stay the same." Ideally, the study participants will be reevaluated in about three years, which he plans to do, he said.

In another study, George Vavougios, a postdoctoral researcher with the University of Thessaly in Greece, examined the prevalence of cognitive impairment in COVID-19 patients two months after they were discharged from the hospital. (Participants' average age was 61, and they had mild to moderate cases.) He also looked at how that impairment was associated with physical fitness and respiratory function.

Vavougios found that patients were experiencing cognitive decline two months after their discharge and that it was associated with poorer respiratory function after he had them complete a short exercise regimen. That indicates COVID fatigue, which is common after viral infections, he said.

Despite their symptoms, few of the patients had considered getting help from a doctor who specializes in brain health.

The results reinforce the need for health care providers to think about cognitive impairment as part of long-COVID syndrome, Vavougios said. "Internal medicine and respiratory medicine outpatient clinics should screen their outpatients and refer accordingly."

Additional research presented at the conference examined whether COVID-19 is associated with an uptick in Alzheimer's biomarkers in the blood, such as total tau (t-tau) and certain species of amyloid beta. The study authors took plasma samples from 310 patients with an average age of 69 who were treated for the coronavirus at NYU Langone Health and found that their levels of some of these biomarkers were higher than would normally be expected, similar to "the biological changes that might be associated with Alzheimer's and other brain diseases," Snyder said. She added: "We don't understand why people may be having this change in biology. We don't know if this is going to persist."

In press materials, the study authors noted that "patients who had COVID-19 may have an acceleration of [Alzheimer's disease] symptoms and pathology."

However, Richard Isaacson, who is director of the Alzheimer's Prevention Clinic at Weill Cornell Medicine and was not involved with the research, expressed concern about that characterization. "I think it's an important study with early findings that may suggest there could be smoke," he said. "But this is far from proving that there is fire relating to the effects of COVID-19 on the brain and the effects of the relationship between COVID-19 and a person's risk for Alzheimer's or cognitive decline."

Researchers already know that some conditions, such as HIV and herpes simplex, can cause brain inflammation that leads to cognitive decline, Isaacson said. But it is difficult to determine whether COVID-19 was accelerating Alzheimer's symptoms in these patients, he said, since their baseline status is unknown. It is possible they could have already been in the early stages of dementia, he said, rather than experiencing COVID-related brain changes.

"If they had biomarkers on people before they got the COVID virus, and then checked the biomarkers after, and the tau went up and all these other things went up - well, then that could be suggestive that this virus is fast-forwarding or accelerating Alzheimer's disease or Alzheimer's pathology," he said. "But I'm not ready to say that at all."

"Is there a yellow flag that something could be going on? I would say sure," he said. "Is this a red flag or anything definitive? I would say definitely not."

The findings presented at the Alzheimer's Association conference are based on abstracts, or short summaries of completed research. That means they have not been rigorously peer-reviewed (assessed and critiqued by other experts in the field) or published in medical journals.

Still, experts said, the early insights could be valuable. "This pandemic gave us a really unwelcome opportunity to study the impact of viral infection - but specifically this virus - on the brain," said Snyder, of the Alzheimer's Association.

The research is "eye-opening," said Keith Vossel, who is director of the Mary S. Easton Center for Alzheimer's Disease Research at UCLA and was not involved with the new studies. "The gist of what these studies as a whole are showing is that there are some transient increases or changes that are indicative of brain inflammation and injury and also overlap with some of the changes that occur with neurodegeneration."

While some of those changes might have happened because the patients were already predisposed to dementia, "we can't rule out the other possibility, which is that the virus is invading the brain and causing the injury."

Vossel's conclusion after reviewing the finding: "We need to do everything we can to protect ourselves against this infection, because we really are dealing with a new virus and we don't know what the long-term consequences will be."

Snyder agreed, emphasizing that people who are not already vaccinated should get inoculated as soon as possible. "The best advice is don't get covid," she said. "If you've had covid and you're experiencing some of these memory changes or changes in your everyday functioning, talk to your health-care provider. Make sure that they know about that and that they're talking with you about it."