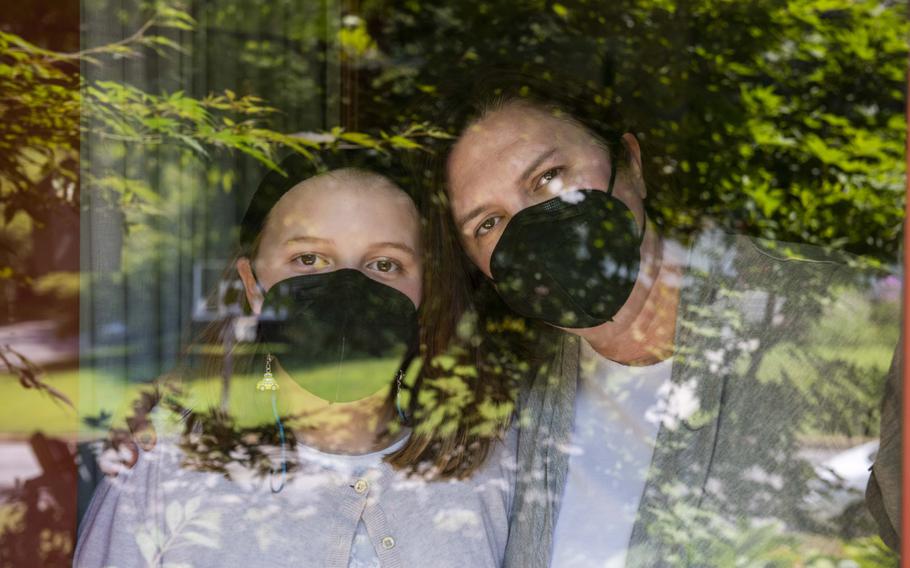 Kim Marin and her 12-year-old daughter, Kate, isolate at home Friday in Fairfax County, Va. Both are fully vaccinated and recently tested positive for the coronavirus. (Amanda Voisard/For The Washington Post)

Kim Marin planned to spend her 51st birthday on Friday eating a cherry pie made by her 80-year-old mother and 12-year-old daughter.

But Marin and her daughter, Kate, began feeling ill earlier this week. On Wednesday the pair, who are fully vaccinated and live in Fairfax County, Va., tested positive for the coronavirus.

At first, it seemed like they just had a bad cold: They were coughing, sneezing and feeling achy. But their symptoms got progressively worse. Kate developed a bad sore throat and the two were outright exhausted.

"Because my daughter and I were feeling so badly, I just thought, let's go to urgent care and while we're here, they should probably test us (for the coronavirus)," Marin said. "We both got tested and we were shocked. We both were first in line to get vaccinated when we were able to." Betty Douglass, 80, drops off a cherry pie Friday for daughter Kim Marin's 51st birthday at her home, while Marin and her daughter are self-isolating. (Amanda Voisard/For The Washington Post) 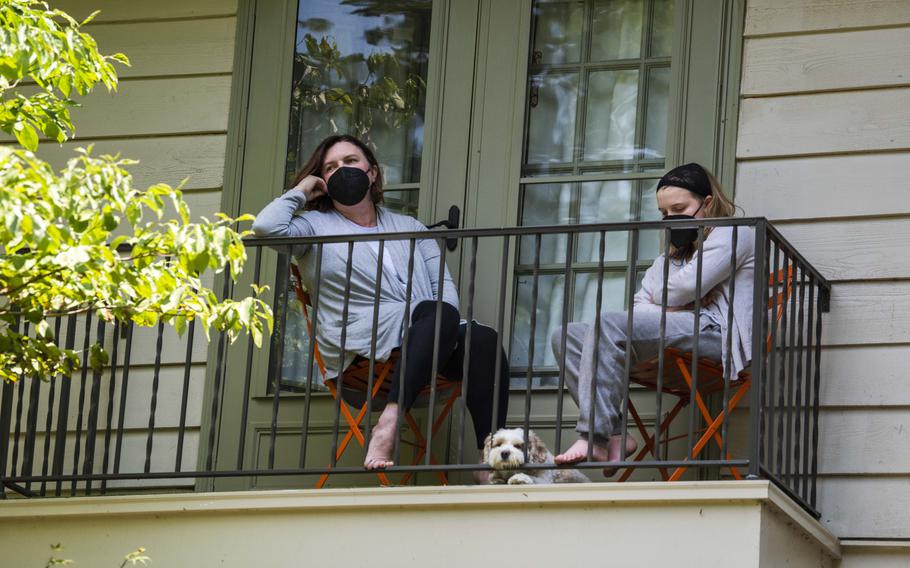 Kim Marin and daughter Kate, 12, are fully vaccinated for the coronavirus, but tested positive for the virus earlier this week. (Amanda Voisard/For The Washington Post)

"I think the thing that's so startling is that we have been really sick," Marin said. "The messaging has been that cases like ours should be pretty mild. ... We're not in the hospital, so we're so grateful for that. But it still has not been an easy week."

Marin said she isn't quite sure how she and her daughter contracted the virus. Her family still frequently wears masks when going to the grocery store, only having walked into a store a few times without one.

The positive tests have put a wrench into their plans for the near future, which, to a certain extent, were rewards for their good behavior. In addition to the cherry pie Kate and her grandmother planned to make together for Kim, there was the overnight camp that Kate was supposed to attend next week, and the memorial service for an uncle next weekend.

"I just feel like this is a wake-up call for my loved ones, I really thought I just had a bad cold," said Marin, a soon-to-be middle school social studies teacher. "I think we need to not make assumptions about our illnesses these days."

Health officials have yet to contact to Marin and her daughter for contact tracing, she said. But Marin immediately notified her doctor and the family's pediatrician about their results. Marin said her nurse told her she was getting more of these calls from vaccinated people, and told her to go back to wearing masks full time.

Officials in the Washington region haven't moved to reinstate mask restrictions, though that shouldn't be off the table yet, especially as the highly contagious delta variant continues to spread across the country, said Neil Sehgal, an assistant professor of health policy at the University of Maryland School of Public Health.

"The mandates and the phases that were in D.C., Maryland, Virginia were never meant to be like an exit-only door," Sehgal said. He said the goal has always been to "match the level of precaution that we're taking in public with the level of transmission that we're seeing."

The delta variant has already become the dominant strain in Maryland and Virginia; it makes up 1 percent of cases in the District, but officials are working to increase their sequencing of specimens. While the risk of contracting the virus for vaccinated people is still low, it has increased compared to earlier strains, Sehgal said.

"The delta variant is much more infectious than the alpha variant was, and than the wild type was before that, and so a better understanding really is - in the short term, in the past 30 days - what proportion of new cases were in individuals who are vaccinated, because that gives a better picture today of what the risk is today to any vaccinated person," Sehgal said.

For her part, Marin plans to go back to taking the precautions she followed in the spring. She has young nephews whom she doesn't plan to be around without a mask anymore. And she no longer plans to go maskless in any public spaces. But she's still grateful for the vaccines.

"I'm struck by how much worse it could have been," Marin said. "While it's been very unpleasant, and scary, we have not felt like it was life-threatening, and the vaccine has made that possible."