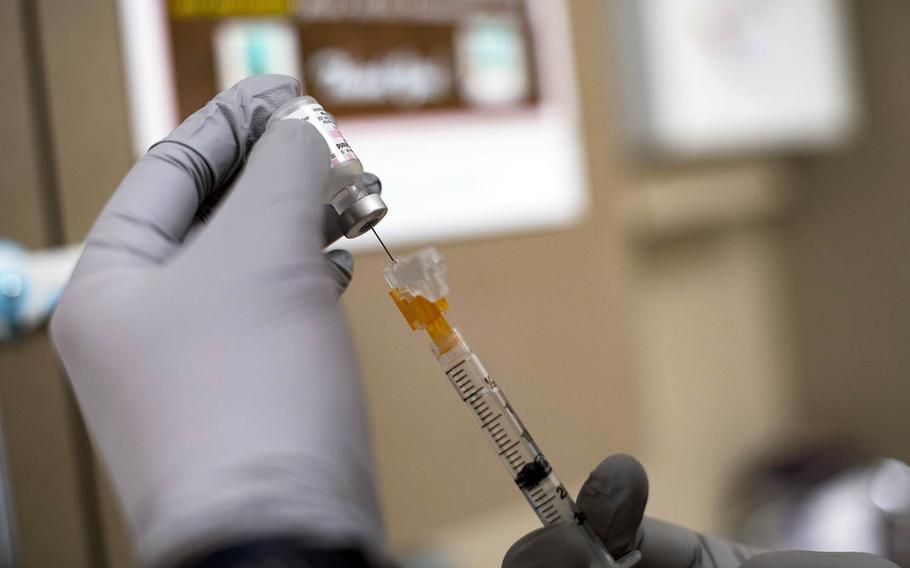 The Food and Drug Administration approved the two-shot Pfizer-BioNTech vaccine for ages 12 to 17 on May 10. That decision was later endorsed by a Centers for Disease Control and Prevention advisory panel. (Lawrence Sena/U.S. Air Force)

Pfizer and BioNTech will supply the U.S. with another 200 million doses of their COVID-19 shot, setting up a stream of vaccine deliveries through next April in a push to protect kids and potentially provide boosters.

The White House is setting its sights on immunizing children under the age of 12, who are not yet eligible, and potentially deploying booster doses if new data shows they are necessary, according to a Biden administration official familiar with the contract.

Of the new doses, 65 million will be tailored for the younger pediatric population, should the vaccine be cleared for kids younger than 12, according to the official, who spoke under the condition of anonymity as the contract is not public. Some of those doses would be immediately available upon authorization.

The U.S. also has the option to acquire an updated version of the vaccine, if it’s available and authorized, to tackle potential variants, the companies said Friday in a statement.

Pfizer didn’t immediately respond to a request for comment on the details of the contract regarding the pediatric vaccines. The drugmaker’s shares gained 0.6% at 11:30 a.m. Friday in New York, while BioNTech’s American depository receipts lost 2.1%.

The new U.S. deal coincides with a back-to-school push to get children immunized. The Pfizer-BioNTech vaccine is already cleared for those 12 and older, and studies in younger children are underway. The companies could learn by the fall whether the vaccine provides immunity in those as young as 6 months old.

U.S. health officials have said that the government could be ready to vaccinate children of any age at the outset of 2022. In the pediatric trial, children ages 5 to 11 are receiving one-third of the dose given to adults, and children under 5 are getting one-tenth.

While the U.S. government has secured enough to fully vaccinate all eligible Americans, it’s evaluating giving the vaccine to children and providing extra protection to the vulnerable, such as the elderly and those with weakened immune systems.

To launch new U.S. vaccine campaigns, deploying shots to children or booster doses to already-immunized Americans, preparations must begin now. Altogether, the deal brings the total doses to be supplied to the U.S. to 500 million.

“These additional doses will help the U.S. government ensure broad vaccine access into next year,” Pfizer Chief Executive Officer Albert Bourla said in a statement. Some 110 million of the additional shots will be shipped this year, and the rest will be delivered no later than April 30, the companies said.

Concerns about whether additional booster shots will be needed to top up immunity for people who’ve already had both doses of the vaccine are rising as the delta variant spreads around the world. Pfizer said earlier this month that it plans to request emergency authorization for a third booster dose in August.

Pfizer’s announcement that it would seek clearance for booster doses prompted an unusual rebuke from U.S. health officials, who said it was too early to know if they would be needed and that the agency wouldn’t rely only on drugmakers’ data for a decision. Pfizer CEO Bourla called Anthony Fauci, Biden’s top COVID-19 medical adviser, to apologize.

The Biden administration official said that its possible the U.S. would deploy booster shots if studies show they are neccesary.

The Food and Drug Administration and Centers for Disease Control and Prevention are closely monitoring vaccine protection’s durability and efficacy against variants. As the virus continues to spread in unvaccinated areas of the U.S., many experts are concerned more virulent strains could emerge.

Some people may need booster doses sooner than others. On Thursday, advisers to the CDC demonstrated early support for providing boosters to those with weakened immune systems for whom vaccine protection is likely to wane more quickly. The Advisory Committee on Immunization Practices did not make a formal recommendation.

Pfizer and BioNTech are also supplying the U.S. with 500 million doses for donation to low-income countries. Through a June agreement, doses will begin shipping in August.

The partners are expanding their supply chain around the world, bringing on new facilities in Europe and South Africa, while exploring new opportunities in Latin America.