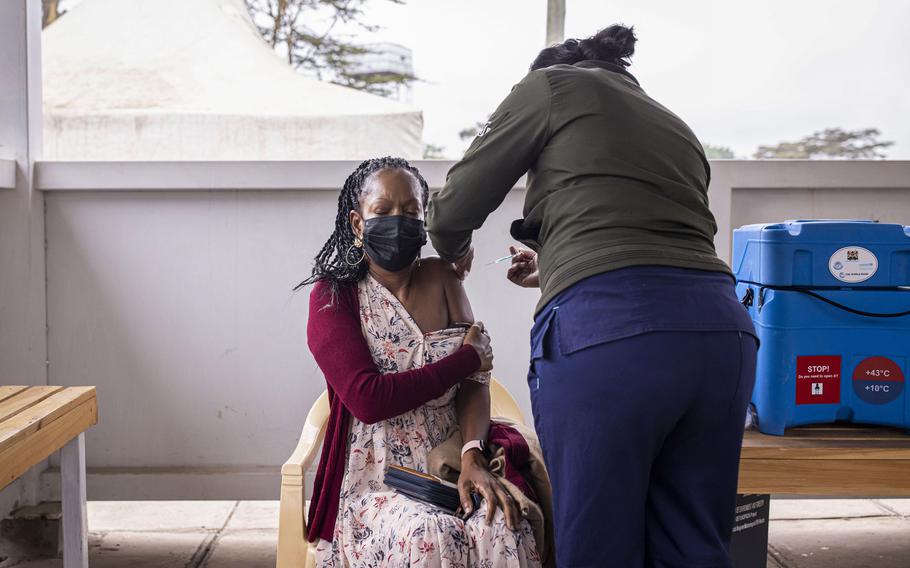 A resident receives a dose of the AstraZeneca Covid-19 vaccine at Mbagathi Hospital in Nairobi, Kenya, on July 6, 2021. (Patrick Meinhardt/Bloomberg)

Africa had its worst week of the coronavirus pandemic, with cases jumping 20% in seven days, and the situation is expected to intensify, according to Matshidiso Moeti, the World Health Organization's Africa director.

"For Africa the worst is yet to come as the fast moving third wave continues to gain speed and new ground in countries," Moeti said on a conference call. The end of this wave "is still going to be several weeks away."

During the week to July 4 a record 251,000 coronavirus cases were recorded in Africa and cases are now doubling every 18 days, she said.

Sixteen African countries are now officially seeing a virus resurgence. That's as the highly-transmissible delta variant has spread across the continent and is now dominating in many regions, said Tulio de Oliveira, the director of Krisp, a South African genome sequencing institute.

The current upsurge also comes while less than 2% of Africans are now fully vaccinated, meaning that hundreds of millions of people are still vulnerable to infection and severe illness.

Still, vaccine deliveries from the Covax vaccine-sharing initiative are gathering momentum, Moeti said. After almost grinding to a halt in May and early June, more than 1.6 million doses were delivered through Covax to the continent in the past two weeks and more than 20 million Johnson & Johnson and Pfizer shots are expected to arrive imminently from the U.S., she said.

Significant donations from Norway and Sweden are also currently being finalized and France will be sending 300,000 of the shots developed by AstraZeneca to Kenya and Somalia on Thursday, Moeti said.

"Covax had been working tirelessly to clinch dose-sharing pledges and procurement deals with manufacturers to ensure Africans get their vaccines," Moeti said. "With much larger deliveries expected to be arriving in July and August, as a region we must use this time to prepare to rapidly expand the roll-out."