Putin’s ‘lockdown lite’ as Moscow stops millions from dining out 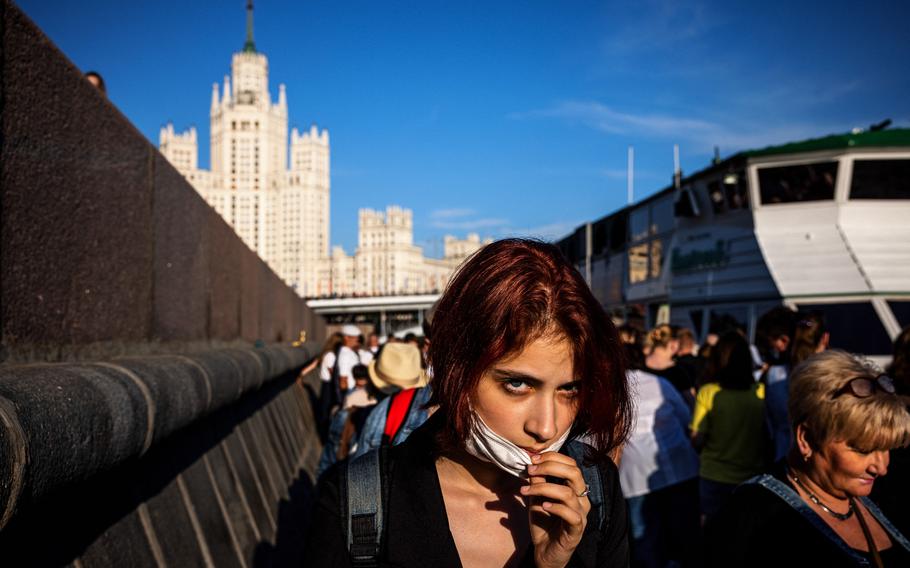 A woman adjusts her protective face mask while waiting to board a cruise boat trip along the Moskva river in Moscow on June 13, 2021. (Dimitar Dilkoff/AFP/Getty Images/TNS)

(Tribune News Service) — As the COVID-19 pandemic rears up again in Russia, President Vladimir Putin is following Israel’s example as Moscow stops millions of residents from entering bars and restaurants without proof of vaccination or recovery from the illness.

But mindful of hostility to the vaccines in Russia ahead of key elections, he’s steering away from making the shots mandatory nationwide.

“Damn!” swore a 26-year-old who gave his name as Nikolai, as staff refused him entry to a bar in downtown Moscow, on a recent evening. In the end he got a beer and sat sullenly in the rain at the venue’s outside tables. City authorities have allowed summer terraces to accept all customers, but only until July 12.

The Russian capital on Monday began requiring residents to show a QR code proving they’ve had a vaccine, recently tested negative, or have recovered from the virus to get into bars and restaurants. So far, they’ve issued only 2.5 million passes to a population of 12 million. A top official said the city may extend the system to shops, entertainment venues and public transport.

Other regions are also imposing strict rules to pressure people to take the jab. The QR system is also in effect in the broader Moscow region of about 8 million people.

Russia has been reporting record-high numbers of deaths from COVID-19 recently in a fresh wave of infections that’s strained hospitals and pushed daily new cases above 20,000, the most since January. The highly contagious delta variant first identified in India is largely behind virus’s resurgence, and it’s sparking concerns about undermining Russia’s fragile economic recovery.

Putin on Wednesday defended the measures, warning in his annual televised “Direct Line” phone-in that the new system is the only way to avoid a national lockdown.

Despite Russia being among the first countries to announce mass vaccination, only about 10% of the population is fully vaccinated in the face of widespread public skepticism toward its four domestically-produced shots. That compares to about 35% of European Union residents, 47% in the U.S., and half in the U.K.

“It makes sense in the middle of a pandemic, with new strains that are circulating that are dangerous, to try and protect citizens,” said Arthur Caplan, professor of medical ethics at New York University School of Medicine. “The authorities do have a role to mandate vaccination requirements in public places. It’s a restriction of liberty, but you can choose not be vaccinated, it just limits where you can go.”

The Russian policy mirrors a growing focus on encouraging vaccination elsewhere in the world. The European Union has launched a digital certificate allowing travel freely within the 27-member bloc with proof of inoculation, evidence of recent recovery from COVID-19, or a negative test result.

COVID-19 tests are increasingly easy to access and cheap or free in many countries, part of a strategy to quickly restart economic activity. Testing remains expensive in Russia.

While in Israel, the government for several months earlier this year introduced a “green passport” limiting entry to entertainment districts to the vaccinated and those cured of COVID, Putin has left it to local officials to enforce the restrictions and impose orders requiring millions of state employees and workers in consumer-facing businesses to get inoculated.

“There are many people who are dead set against getting vaccinated,” said Alexei Makarkin, deputy director of the Center for Political Technologies in Moscow. “It’s a very unpopular issue.”

Russia will hold parliamentary elections in September, with the ruling party’s support at 27%, the lowest since 2013, according to the latest poll by the independent Levada Center.

For restaurant owners, the rules seem like a lockdown, said Igor Bukharov, head of the Federation of Restaurant and Hotel Owners of Russia.

Some eateries have lost 80% or more of revenues, and unlike last year, when temporarily closed businesses got help with staff salaries, there’s only limited state help available.

With packed summer terraces in the Russian capital a lifeline for the roughly 3000 eating establishments with outdoor space, out of the city’s 15,000 restaurants, owners are hoping the exemption on QR codes will be extended past July 12, Bukharov said.