by
Ovetta Wiggins and Justin Jouvenal
• The Washington Post • July 3, 2021 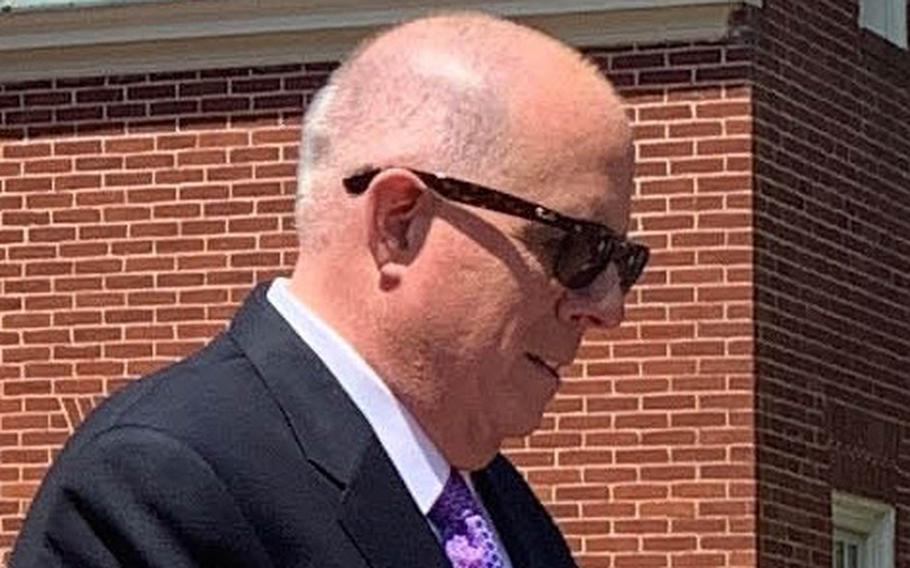 Maryland Gov. Larry Hogan speaks during a briefing on May 20, 2021. On Saturday, July 3, a judge blocked an order Hogan had made to end enhanced federal unemployment benefits. (Ovetta Wiggins/Washington Post)

Judge Lawrence Fletcher-Hill issued a temporary restraining order, becoming the second judge in the United States in recent days to halt a governor's order on unemployment benefits related to the pandemic from taking effect. Maryland is one of at least three states where lawsuits have been filed by jobless workers.

The restraining order lasts 10 days, and the judge said he will schedule a full hearing on the plaintiffs' request for a preliminary injunction against Hogan's order in the coming days. Hogan said he plans to appeal the ruling.

Hogan's order would have ended benefits on Saturday, cutting off residents from a source of extra aid on top of state unemployment benefits.

Fletcher-Hill said it appeared likely Hogan does not have the authority to end the program early and it would cause serious harm to thousands of state residents still struggling with the economic fallout from the coronavirus.

Hogan, a Republican, is facing two lawsuits over his decision to cancel the federal jobless benefits on July 3, two months ahead of the date set by Congress.

Fletcher-Hill's ruling is in response to requests made in a class-action lawsuit filed last week by the Unemployed Workers Union - which is led by the Baltimore-based Peoples Power Assembly - and in a suit filed by six unemployed workers, many of whom are hospitality and food service employees represented by the Unite Here Local 7 union.

Roxie Herbekian, president of UNITE HERE Local 7, hailed the ruling in a statement.

"This is welcome news for the thousands of hospitality workers in Maryland who are still laid off due to the Pandemic," Herbekian said. "The convention and visitor industry has not fully recovered. This will give people a little more time to be recalled or find other jobs."

Hogan said in a statement the enhanced benefits were impeding the recovery of the state.

"There is a record number of jobs available right now, and this program is making it harder to fill them and fully reopen our businesses," Hogan said. "It's hurting our recovery across every region and industry."

At least 25 states led by Republican governors have decided to end the enhanced benefits, which were created by Congress to cushion the blow of the coronavirus pandemic, and are authorized and funded through September 6.

A judge in Indiana ruled last week to allow jobless workers to continue receiving the federal benefits while their lawsuit moved forward. A judge in Texas rejected a request for a temporary injunction in a similar case.

Meghan Casey, an attorney representing some of the jobless workers in Maryland, said during the hearing on Friday that her clients are not asking for "a permanent handout, just a little more time."

She argued that the continuation of the benefits would cause "zero harm" to the state, noting that all of the money comes from the federal government. Meanwhile, she said, some of her clients risk losing their homes and being unable to pay for medications and food.

"The risk here is quite grave," she said, describing the benefits as a "vital lifeline to continue to survive until they get back to work."

He has said the enhanced benefits were no longer necessary because of the widespread availability of vaccines and a tight labor market, which he said made it important for the jobless to get back to work.

But Fletcher-Hill wrote he granted the restraining order in part because the plaintiffs in the case will likely succeed in arguing Maryland code requires state officials to maximize the use of any federal unemployment benefits, so ending the program early runs afoul of the law.

Hogan says it's time to get back to work. To the laid off, it's not that simple.

The Maryland Department of Labor estimates that the order would affect about 250,000 residents. One of them is Shad Baban, who lost his job in the hospitality industry. He said he worries what would happen to his family if his benefits ended.

"I am the breadwinner for my wife and 9-month-old, and I won't be able to cover to my family's expenses," said Baban, a plaintiff in one of the lawsuits. "We'll almost certainly lose our home, and I'll lose my car, which I would need to work. I thought these benefits would see me through the next couple of months until I can get on my feet."

Jobless workers have protested Hogan's decision with marches in Annapolis and a rally in front of the Baltimore Convention Center, which has been transformed into a makeshift hospital for the past year. Advocates say they plan to picket in front of the office of Labor Secretary Tiffany Robinson, who is also a defendant in the lawsuit, in coming days.

Democratic elected officials have condemned the governor's decision, calling it cruel and shortsighted. Attorney General Brian Frosh, a Democrat, who would ordinarily defend the governor in legal challenges, slammed Hogan for the decision in a recent opinion piece.

He said Hogan's decision to reject the $1.5 billion in federal aid would have "devastating consequences. It will deprive Marylanders of a life-sustaining bridge to full-time employment. It will mean more Maryland families lose their homes. It will deprive the state's economy of federal assistance that would otherwise help businesses reopen and create jobs that would actually make unemployment benefits no longer necessary."

The state is being represented by Venable LLP, a high-powered, nationally known firm with offices in Baltimore.

The class-action lawsuit also is pushing for people who have filed unemployment claims, but have not yet received payments, to receive their benefits.

Sharon Black, who represents UWU, said in an email to supporters before the hearing that "no matter what takes place tomorrow, good, bad, or in between, we will continue to fight until every Marylander gets their unemployment benefits."