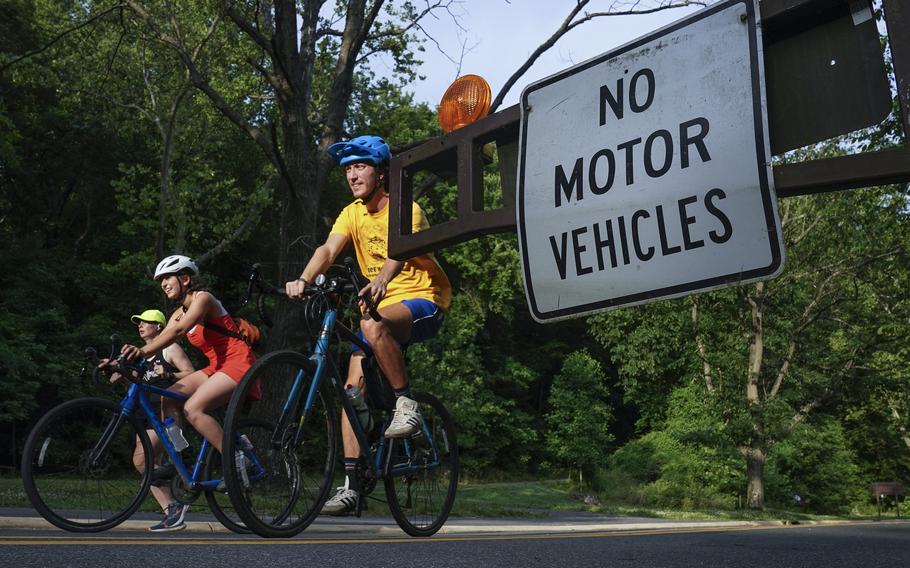 Paris barred most cars from the majestic road that goes past the Louvre Museum, then months later announced it would keep it that way. New York followed suit, making permanent a program that clears space on public roads for walking, biking and, in the case of 34th Avenue in Queens, Mexican folk dance classes.

In San Francisco, officials are weighing whether to keep part of John F. Kennedy Drive in Golden Gate Park closed to cars, prompting a tussle among drivers, pedestrians, bicyclists and a fine arts museum that lost easy public access to its facilities.

Leaders in other cities are pushing to do the same, seeing an opportunity to cement progress in making streets safer, more enjoyable and less polluting. The moves have also roiled long-running debates about the role of the automobile and the purpose of public streets.

In Washington, the D.C. Council in June appealed to the National Park Service to keep cars off a scenic stretch of Beach Drive in Rock Creek Park, a move also supported by Democratic Mayor Muriel Bowser. But one initial supporter of the idea, Del. Eleanor Holmes Norton, D-D.C., tapped the brakes after opposition emerged, showing the complexities of limiting car travel, even in a city where local and federal officials have sought to emphasize other modes of transportation.

President Joe Biden is pushing an infrastructure overhaul that prioritizes climate change, pedestrian safety and equity. Transportation Secretary Pete Buttigieg is advocating for "complete streets" designed for more than cars. And Norton, as chairwoman of the House Transportation Subcommittee on Highways and Transit, has championed a major transportation bill that seeks to curtail the primacy of the automobile.

But when it comes to the idea of permanently ejecting cars from a creek-side stretch of road in her district - which she requested from the National Park Service in a letter last month - Norton was surprised by the pushback.

"I must have been wrong . . . The community appears much more divided than I thought," Norton said in an interview. She planned a public meeting on June 29 to hear from residents ahead of a second session on July 8 organized by the Park Service.

Acting with unusual swiftness, hundreds of cities changed the way their roads were used early in the pandemic, often using paint, plastic posts, temporary barriers or signs asking for compliance. Some adjustments were popular, creating what supporters saw as urban oases. Others provoked drivers' ire. Efforts to make pop-up infrastructure permanent offer a preview of bigger battles to come amid changing priorities in Washington, with safety and environmental advocates saying cities must become more nimble and responsive to community concerns if they are to tackle climate change or reduce the death toll on U.S. roads, which topped 38,000 last year.

"The nature of the emergency was that things happened fast. But the nature of democracy is that the things that last are the things that people talk over and agree to," said Philippe Crist, adviser on innovation and foresight at the Paris-based International Transport Forum.

Transportation chiefs from 63 countries, including Buttigieg, jointly called in May for seizing on a surge in walking and biking during the pandemic to accelerate a move toward more "accessible and resilient" transportation infrastructure. Milan, Brussels, Rome, Bogota and Lima are among cities making much of their pop-up pedestrian and cycling changes permanent, the group said.

In the United States, the National Association of City Transportation Officials tracked the trend and offered grants to cities that repurposed streets in neighborhoods hit disproportionately hard by the pandemic.

Detroit temporarily closed streets near schools for community groups to create outdoor learning spaces and provide child care. Philadelphia worked with restaurant owners in communities of color who were underrepresented in the city's pandemic-era program to convert streets to dining spaces.

"Our streets are physical manifestations of our policy and funding choices," said Zabe Bent, the transportation association group's design director. "Cities are taking a moment to say, 'Where are we now? What are the needs now?'"

Some cities, including Philadelphia, plan to continue their program at least through this year, Bent said. Kevin Lessard, a Philadelphia city spokesman, said officials are working with businesses and residents to figure out what to roll back while also considering "a permanent program that can be implemented in a safe, responsible and equitable way."

Others are working on similar efforts to repurpose streets.

In San Francisco, officials created a five-step process to gauge which "slow streets" that restricted cars during the pandemic are worth keeping. It includes multilingual outreach and design improvements before the installation of more durable traffic barriers.

Transportation officials in Pittsburgh, where brutal winters can upset plans for outdoor dining and recreation, are looking to keep several closures at least seasonally, said Karina Ricks, director of the city's Department of Mobility and Infrastructure.

"We remain focused on small business recovery, safety, climate and job creation, and these street adaptations are vital contributors to that," Ricks said in an email.

A new law in New York requires city transportation officials to operate an "open streets" program that gives space to pedestrians, bike riders and others for up to 24 hours a day.

A community group in the Jackson Heights neighborhood in Queens has been honing a popular closure along 34th Avenue, installing tennis balls under traffic barriers so they don't annoy neighbors when dragged into place each morning. Discord has bubbled up, with an objector in Brooklyn hurling barricades into a nearby creek. City transportation officials have been pushing further changes, and recently began replacing a traffic lane on the iconic Brooklyn Bridge with a two-way, protected bike lane.

In Paris, the pandemic broadened the ambition of changes that had started along Rue de Rivoli, a major east-west thoroughfare that runs past the Louvre Museum to the square that once held the Bastille prison. The city had set aside one traffic lane for bikes in 2018, then last year created a multilane boulevard for cycling. Space is reserved for buses, taxis, residents and deliveries.

The move, part of a broad expansion of bike lanes during the coronavirus pandemic, has proved popular with many Parisians, less so for some on the outskirts of the city who drive in, said the International Transport Forum's Crist, who lives in France and grew up in Tennessee. 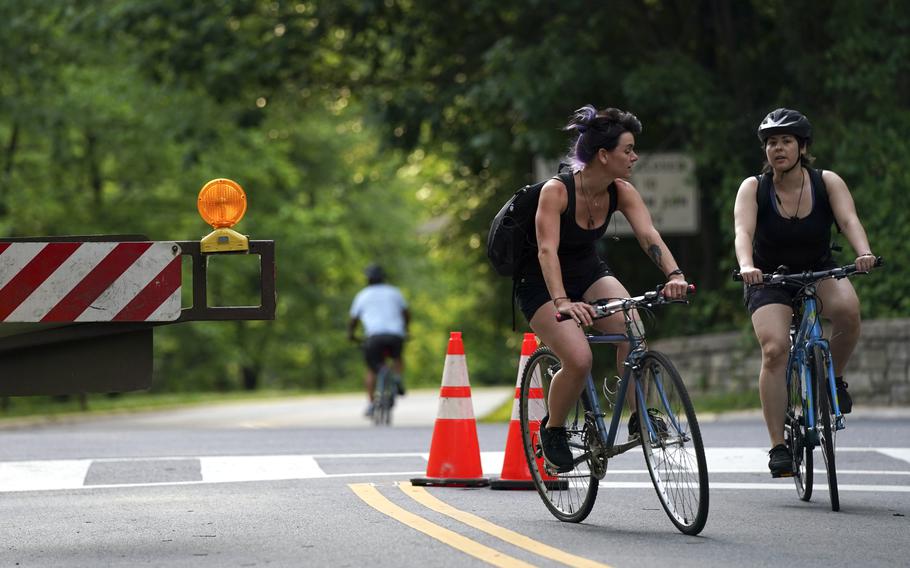 Cyclists in Washington D.C. enjoy a stretch of Beach Drive that is closed to vehicle traffic. (Toni L. Sandys/Washington Post )

"Cities bear the marks of past pandemics," Crist said, pointing to green spaces laid out in London over the course of successive plagues. "We are starting to realize our allocation of space had maybe gone too far one way" - toward the automobile, he said.

A push to permanently shift the balance away from commuters on a stretch of road through Rock Creek Park in the U.S. capital shows the cleavages that can open around such efforts.

On weekdays, people jog with their dogs, bike and roll strollers down the middle of curved, car-free traffic lanes, including over the historic Boulder Bridge, which was fitted with large stones in 1902 to blend with a picturesque part of the park that drew repeated visits by president Theodore Roosevelt.

For some, it has provided relief. Sherry Marts rides her bike on the closed stretch to offices downtown from her home in the Shepherd Park neighborhood. "Being able to ride without having to play dodge-car is such a delight!" she said.

Priyanka Banerjee-Guenette used the space to build back her strength, balance and confidence after brain surgery last year, she said, and loves "the wind on my face."

But some neighbors say they fear longer commutes and rerouted traffic.

Frances Burke, one of thousands of people who signed dueling petitions over the proposed permanent closure, argued the number of cars zooming past "will skyrocket," worsening existing speeding problems through her Hawthorne neighborhood. "I have four children and do not want their lives risked every time they walk out the front door," she wrote.

D.C. Council member Mary Cheh, whose district includes some of the communities beside the national parkland, said she's seen no evidence of added safety risks in neighborhoods stemming from the closure, a move she supports.

"Covid, as bad as it was, has allowed us to reimagine a lot of things," Cheh said. "One of the things is how we use public space."