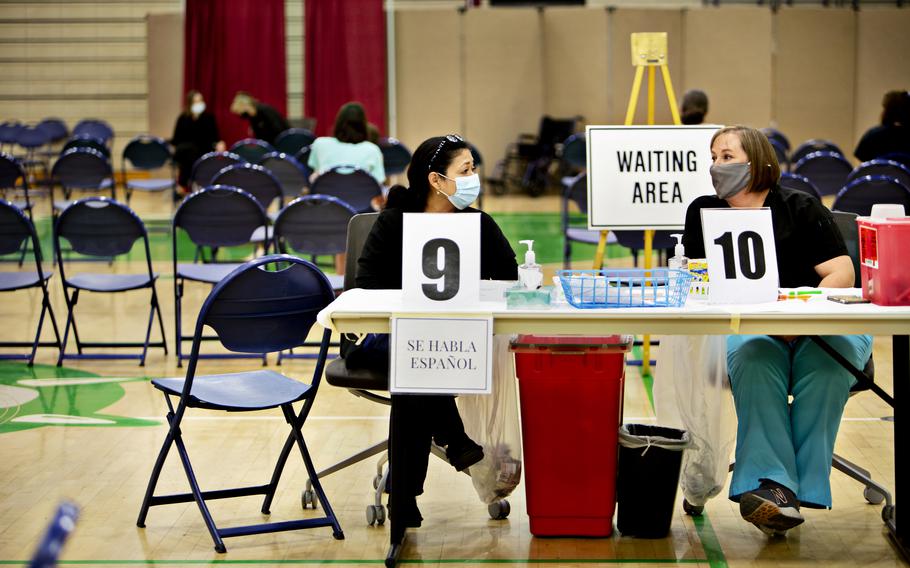 Nurses wait for patients at a vaccination clinic site in Utah, on June 2, 2021. Parts of Utah are experiencing dwindling demands for coronavirus vaccines. (Kim Raff/Washington Post)

WASHINGTON — The rapid spread of the delta variant of the coronavirus is poised to divide the United States again, with highly-vaccinated areas continuing toward post-pandemic freedom and poorly-vaccinated regions threatened by greater case loads and hospitalizations, health officials warned this week.

The highly transmissible strain already is taxing hospitals in a rural, lightly vaccinated part of Missouri and caseloads and hospitalizations are on the rise in places such as Nevada, Arkansas and Utah, where fewer than 50% of the eligible population has received at least one dose of vaccine, according to data compiled by The Washington Post.

One influential model, produced by the Institute for Health Metrics and Evaluation at the University of Washington, predicts a modest overall surge in cases, hospitalizations and deaths this fall. Scott Gottlieb, former head of the Food and Drug Administration, said Sunday there could be a fall surge even if 75% of the eligible population is vaccinated.

But experts believe most damage will occur in localized pockets where large numbers of people have declined to be vaccinated or have not gained access to the shots.

"I think a rise in cases is certainly going to happen," said William Hanage, an associate professor of epidemiology at the Harvard T.H. Chan School of Public Health. "[The question] is how large a rise and how consequential it's going to be.

"Those under-vaccinated communities are more likely to be severely" affected, he said.

At a briefing by the White House COVID-19 Response Team Tuesday, Anthony Fauci, the nation's top infectious-disease specialist, said "there is a danger — a real danger — that if there is a persistence of a recalcitrance to getting vaccinated, that you could see localized surges, which is the reason why I want to emphasize what all four of us have said: All of that is totally and completely avoidable by getting vaccinated."

Resistance is greatest among younger people. Just 38.3% of people aged 18 to 29 have been vaccinated, according to federal research released Monday. Across all age groups, people living in counties with high rates of poor and uninsured people and less access to computers and the Internet were less likely to be vaccinated, the research showed.

In general, rural and Republican areas have embraced vaccination less than cities and Democratic states in the northeast and along the west coast. All the New England states have given at least one dose to 61% of their residents or more. In San Francisco, 65% of residents are fully vaccinated.

Overall, the nation has made dramatic progress against the virus. The seven-day average of new daily cases has plummeted to 10,350 and deaths are down to an average of 273 each day, Rochelle Walensky, director of the Centers for Disease Control and Prevention, reported Tuesday. Those figures are a small fraction of January average daily peaks of nearly 250,000 cases and 3,300 deaths.

In addition, with 80% of adults older than 65 vaccinated, the most vulnerable population is largely protected. That should mean many fewer deaths and hospitalizations even if another widespread surge were to occur this fall or winter.

But the delta variant, which is much more transmissible and causes more severe illness than previous versions of the virus, is taking over the U.S. with stunning speed, as it did in India, the country where it was first identified, and later the United Kingdom. It has doubled as a percentage of new infections every two weeks, Fauci said, from 1.2% of new infections on May 8 to 20.6% this week. Officials expect it to soon become the dominant strain in the U.S.

Helix, a lab company working with the CDC to sequence samples, also concluded that the delta variant and the gamma variant first identified in Brazil are rapidly replacing the alpha variant that was first identified in the United Kingdom and took over in a matter of months, according to research the company posted this week. The work has not yet been reviewed by other experts not involved in the study.

The delta variant may accomplish the same thing within weeks.

"It has come out of nowhere," said Mark Pandori, who runs the genomics lab at the University of Nevada, Reno. "It seems to be a very successful variant and is closing in on the number 1 spot."

Pandori emphasized that the number of positive cases is very low, as they are in many other parts of the country, and that the small number of breakthrough infections among those who have been vaccinated appears to confirm the immunizations' effectiveness against current variants, including delta.

Pavitra Roychoudhury, a virologist at the University of Washington, said cases in the state have been almost exclusively caused by the alpha variant for several months. But in the past two weeks, cases of both the delta variant and the gamma variant have been increasing.

Karthik Gangavarapu, a researcher at the Scripps Research Institute in San Diego who works on genomic epidemiology, predicted that the delta variant may comprise more than 50% of cases by July, based on the volume state labs are seeing. He said the numbers appear to confirm early studies that the variant may be 40% to 60% more transmissible than the alpha variant , which is already more transmissible than the original virus that emerged from Wuhan, China.

"I think the delta variant is troubling. I'm not going to lie," he said.

In Britain, the delta variant, now responsible for more than 90% of new infections, last week forced the government to delay full relaxation of virus restrictions — dubbed "freedom day" by the tabloids — for four weeks.

About 62% of the population in the U.K. has received at least one shot but only 45% are fully vaccinated.

Until now, Britain has focused on getting first shots to as many people as possible. Last December, officials made the controversial decision to delay the second jab, a policy U.S. health authorities resisted.

Public health officials pushed back the recommended vaccination schedules for the two approved vaccines at the time — three weeks for Pfizer and four weeks for AstraZeneca — to 12 weeks to distribute first shots to the largest possible number of people.

But concerns over the delta variant have upended that policy. The British government announced last week that people over 40 in England and Scotland can now get their second jab at 8 weeks instead of 12 weeks.

Stephen Griffin, associate professor in the school of medicine at the University of Leeds, said that introducing the 12-week gap "was a gamble, but it was the right gamble at the time, given the variants that we had, because a single dose was effective against alpha." But he said with the delta variant, it "looks as if a single jab isn't as protective as this new variant compared with alpha."

"If you have a three-month gap between first and second jabs, that opens the playing field to having susceptible individuals out there for the virus to spread through."

At a briefing two weeks ago, Fauci presented data from Britain's public health agency that shows two doses of the vaccines made by Pfizer-BioNTech and AstraZeneca are 88% effective in preventing symptomatic disease caused by the delta variant. He said the Pfizer data would be similar for Moderna's product, which also is an mRNA vaccine.

But one vaccine dose offers just 33% protection, the data shows, a reminder of how strongly the second shot boosts immunity to the virus.

The United States has endured regional outbreaks earlier in the pandemic. The virus first crashed through New York and the northeast in March and April of 2020, then tore through the Sun Belt last summer. In January, the entire country was engulfed by the highest caseloads and death counts of the pandemic.

But vaccines were not available then. Now they are. A Post analysis showed that as recently as the beginning of June, diverging vaccination rates did not predict a difference in case loads. But about the middle of the month, the number of infections began to drop markedly in places where many people were immunized and rise in areas where they are not.

Now, experts believe that trend will continue and grow more pronounced unless vaccination rates pick up in places where they are lagging. And the more the virus circulates, in the U.S. and the rest of the world, the greater the chances that an even more transmissible or dangerous variant will emerge.

"There is light at the end of the tunnel but it's quite a dark tunnel," Gangavarapu said. "As long as vaccination continues, we should be able to avert a further surge. But how this thing will pan out is still a question."