Before becoming a Marine, this recruit first had to defeat COVID-19

But he didn't know that the first enemy he'd have to fight would be the coronavirus that causes COVID-19; or that the disease he'd barely heard of would put his whole company of more than 300 recruits into quarantine for a month.

"It usually takes three months, but we were the first company to have a four-month boot camp because of the quarantine," he said. "It was like a historical boot camp moment because we had the longest boot camp in history as a company."

It was near the start of the pandemic last year and medical science had yet to get the measure of the disease.

"Our first day was March 30, so when I left on the 29th, it was still like a meme on Twitter," Kelly said. "It wasn't being taken seriously. I went there, about a week and a half into it, people started getting sick and they kind of like quarantined everyone.

"I know across the U.S. they stopped taking in people for basic training. But since everyone was there and we'd already started training, we were quarantined until everybody tested negative."

Kelly, now back in Wichita as a lance corporal in the Marine Reserve, came down with the disease himself in boot camp.

And it laid him out, despite the fact that he was in excellent physical shape and one of the top five collegiate wrestlers in the country.

When he was told he had COVID, "My first thought was like, that makes sense, 'cause I feel terrible. I had never been that sick," he said.

His second thought was "Well this sucks. Hopefully I get better."

He did and he's fine now. But it wasn't a pleasant experience.

"My first symptom was like loss of taste and smell, and then I started to get like real short of breath," he said. "I had a fever too, which was weird. I think I was like in bed for two to three days, where I was like low energy. I didn't like eating food, because it just didn't taste or anything. It took me about a week to get over it and probably like three weeks to get a negative test."

While the pandemic spread across America, the recruits were isolated from the news — as boot camp always is — so they had little knowledge of what was going on outside the confines of their individual rooms.

And while there was no physical training, those who were well enough studied what the Marines call their "knowledge" the compendium of "customs and courtesies, history, rank structure, the basic information all Marines are supposed to know," Kelly said.

"We had TVs in our rooms, I think it was like 8 a.m. to 12, they had like videos of classes and then you would study those," Kelly said.

As quarantine days dragged on and Kelly began feeling better, he did what he could to try to stay in shape for the rest of his training.

"I would just wake up and do push ups, air squats in my room," he said. "I was trying to do chair drills. I was just antsy. By the time I came out of quarantine, the only thing that I probably had to catch up was my legs for running."

On top of getting COVID, it was also a time of major personal loss for Kelly.

His mother, Cheryl McCullough, passed away from stomach cancer while he was quarantined and he couldn't go home for her funeral.

"Because I had a positive test, the Marine Corps couldn't legally send me on a plane back home like they normally do in that instance," he said.

When he started testing negative again, he said he had three choices: Take an honorable discharge and leave the Marines, go home with a re-enlistment code that would allow him to pick up his training where he left off, or finish boot camp and take an emergency leave after graduation.

He decided to see it through — for his mom.

"One of the last things I told my mom before I left was I was going to come home a Marine," he said. "I felt like if I had gone home, and missed her funeral and then just showed up empty handed, that would be a lot more negative than coming home with my head held high and being able to tell her 'I finished.'"

Like nearly all recruits from west of the Mississippi River, Kelly did his boot camp training in California.

"Everybody in good old Kansas, they'll go to San Diego to the Marine Corps Recruit Training Depot and everybody on the other side of the country, they go to Parris Island in South Carolina," explained Kelly's commander, Staff Sgt. Allen J. Rhee.

Although the training is consistent between the two bases, Parris Island is notoriously swampy. San Diego has a far better climate but more mountainous terrain. It's a source of ongoing good-natured debate among Marines over which is tougher, Rhee said.

"We always hear stories about the sand fleas," from graduates of Parris Island, Rhee said. "San Diego, we've got the mountains, so it's a double-edge sword in a way."

The final hurdle of Marine boot camp is called "The Crucible," a grueling, 54-hour, sleep- and food-deprived test of recruits' knowledge, military skills and endurance. In California, it always culminates with a long hike up a mountain called "The Reaper."

Make it to the top, and you're a Marine.

As Kelly stood at the top of The Reaper, looking out over the Pacific Ocean, he thought about his mother.

"They hand you the emblem of the eagle, globe and anchor, and it's to be emblematic of you having earned your privilege of being called a Marine; you've earned your title," he said. "My EGA that they gave me at the top of this mountain is on my mom's grave. I lost a big part of my family, but in the process of that I joined a bigger family."

Kelly came to the Marines after earning an associate degree at Barton County Community College. He spent a semester each at Baker and Wichita State universities before he decided to join up and follow the footsteps of his father, Audell McCullough, a Marine veteran.

"It wasn't the right time for me to join," he said. "I was a little too emotionally immature."

Now, Kelly plans to resume college in the fall at Ottawa University on a wrestling scholarship.

"Hopefully in the next two years I can get on the podium and be a national champ," he said. "Going from there, I want to do good things either in the Marine Corps or in life in general."

"I got a letter of recommendation to reapply," he said. "Once I finish school, I'm aligning myself to hopefully go back and commission as a second lieutenant." 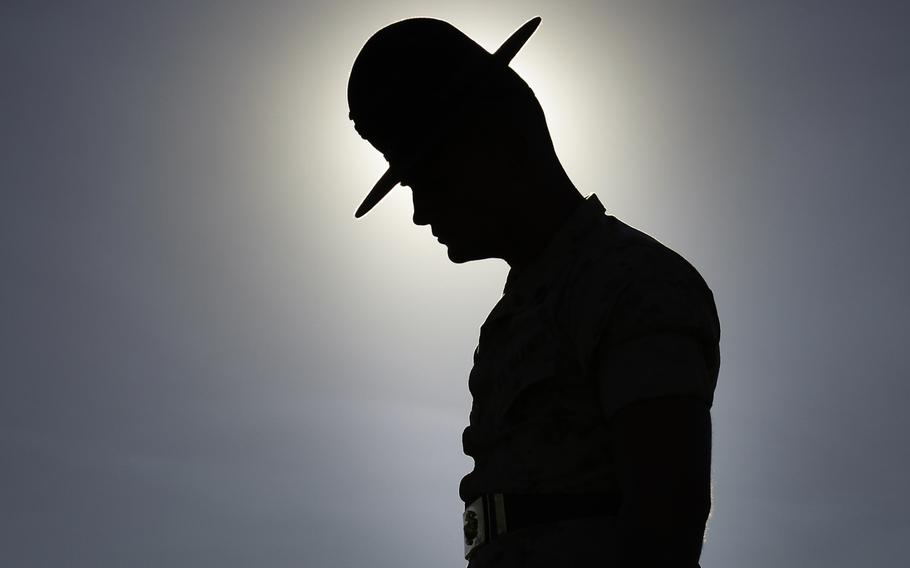