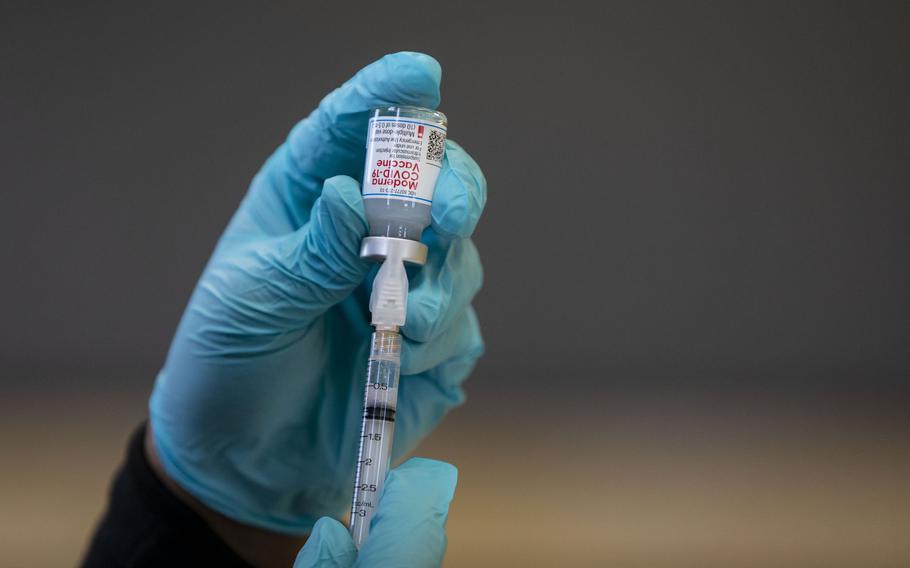 A syringe of the Moderna COVID-19 vaccine is prepared Feb. 14, 2021, at Steinmetz High School in Chicago. (Brian Cassella, Chicago Tribune/TNS)

When Melissa Fisher learned she’d have to get vaccinated to keep her job, she tried to fight it.

Fisher, who works in an assisted living and memory care facility run by Chicago-based Enlivant, gave the company a letter from her pastor explaining her religious objection. Fisher also volunteered to get tested for COVID-19 each week, rather than be vaccinated.

But Enlivant stood firm, telling her in an email Friday that her request to forgo vaccination was denied because of the nature of her job and “the threat to yourself and others from remaining unvaccinated.”

Fisher expects her last day will be Monday.

“I just thought they would honor my freedom of religion, my rights, but apparently we don’t have that right anymore,” said Fisher, who is an apostolic holiness Christian. Enlivant has more than 200 facilities across the country, including in Rockford and Joliet. Fisher, who works at an Enlivant facility in Tennessee, helps residents with daily tasks, such as dressing and going to the bathroom.

Workplace vaccination requirements are expected to become increasingly contentious as more offices reopen, and the issue could be especially pressing in the health care industry, where employees often work closely with elderly or vulnerable patients.

“I think if any type of employer will be mandating the vaccine, it will be in the health care space,” said Margo Wolf O’Donnell, a partner and co-chair of the labor and employment group at law firm Benesch in Chicago.

According to guidance from the Equal Employment Opportunity Commission, employees of any industry can ask to be exempted from vaccination requirements because of sincerely held religious beliefs or because of disabilities. But legal experts say employers can still require the shots if an unvaccinated person would pose a direct threat to others in the workplace, or if accommodating him or her would be an undue burden.

Enlivant is requiring its workers to get at least their first vaccine shots by June 1, spokesman Jeremy Ross said in a statement. The company evaluates requests for religious or medical exceptions on a case-by-case basis and accommodates those employees if it can do so safely, he said.

“We provide direct care to vulnerable senior residents, who trust us to provide a safe and healthy living environment,” Ross said in the statement. “We are equally dedicated to providing a safe and healthy work environment for our valued employees. These are our first priorities and the COVID vaccine is key to ensuring success toward these priorities.”

So far, few Illinois health care companies are requiring employee vaccinations. Many have stayed away from mandating vaccines for workers because the shots have received emergency use authorization, but not full approval, from the U.S. Food and Drug Administration. Pfizer said recently it hoped to secure full approval in the coming months.

Many agencies that provide home health care may revisit the issue of COVID-19 vaccine requirements once the shots gain full approval, said Sara Ratcliffe, executive director of the Illinois HomeCare and Hospice Council.

In the hospital community, “there’s a lot of discussion” about it, said Danny Chun, a spokesman for the Illinois Health and Hospital Association.

The short supply of health care workers has made some health care companies, such as long-term care facilities, hesitant to require the vaccine.

“Because of staffing pressures the sector faces, it’s hard to say, ‘I’m going to mandate it,’ and then lose another four CNAs (certified nursing assistants) you desperately need who are caring for residents,” said Matt Hartman, executive director of the Illinois Health Care Association.

At least a couple of lawsuits challenging workplace vaccine mandates by employers outside of the health care industry have been filed in federal court in other states, but no decisions have been reached in those cases, said Gregory Abrams, a partner at Faegre Drinker Biddle & Reath in Chicago.

“I think as employees return to work and vaccines become more common and more expected, I would expect more employees potentially to push the envelope,” he said.

Fisher, the Tennessee woman, said she is one of about a half dozen workers at her facility who don’t want to get vaccinated and are losing their jobs. Enlivant spokesman Ross declined to say how many of the company’s workers across the country are refusing shots or if any were in Illinois.

Fisher’s objection to the vaccination is twofold. She’s worried about the long-term effects of the vaccine. Fisher said she also believes requirements to get vaccines could be a first step toward the “mark of the beast,” an apocalyptic reference from the book of Revelation.

She said she would never endanger the people for whom she cares, and she wears masks and gloves. She doesn’t think it makes sense for Enlivant to require her to get vaccinated when outside health care workers and visitors are allowed in the facility without proof of vaccination.

“I understand that I’m dealing with the elderly, and I don’t take that lightly,” Fisher said. “They’re my family, and I’m not going to do anything to jeopardize them.”

Fisher said she plans to start a new job June 8.