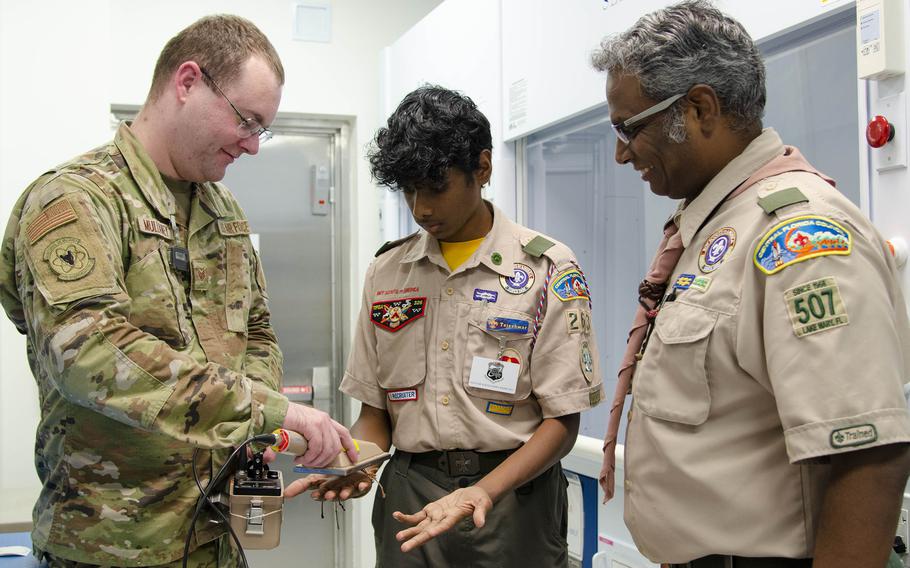 Staff Sgt. John Mullaney II, a scientific applications specialist at the U.S. Air Force Radiochemistry Lab at Patrick Space Force Base, Fla., uses an Alpha/Beta Survey Meter to check for potential contamination on the hands of Tejeshwar Umamaheswar, a Boy Scout from Troop 263 in Lake Mary, Fla., as his father and Scout Master, Umamaheswar Kasinathan, looks on. Teja was one of 62 scouts who traveled to the Air Force Technical Applications Center Oct. 22, 2022, to earn the Nuclear Science Merit Badge with help from Airmen who work at the Department of Defense’s sole nuclear treaty monitoring center. (Susan A. Romano/U.S. Air Force)

PATRICK SPACE FORCE BASE, Fla. (Tribune News Service) — Most of the material that makes it to the nuclear tracking lab at Patrick Space Force Base doesn’t come in “hot.”

The annual load of roughly 15,000 samples from monitoring stations around the world for the most part have normal amounts of radiation, like the kind you might find from potassium-40 in a banana. But the job of the Air Force Technical Applications Center is to keep it that way.

AFTAC’s motto is, “In God We Trust. All Others We Monitor.” More than 600 military and civilian personnel perform this diligence on a daily basis with the help of the USAF Radiochemistry Laboratory at what had been Patrick Air Force Base before changing to Space Force designation in 2020.

While the lab — the only one of its kind in the Air Force — often deals with top secret monitoring, for a decade now AFTAC volunteers have been opening up the facility’s doors to troops with Scouts BSA seeking the hard-to-get Nuclear Science merit badge.

COVID put a halt to events since 2020, but after more than two years, the event was back and running in October for one day only, attracting girls and boys from across Central Florida and even as far south as Jupiter.

It’s one of the few places in the state to offer the merit badge, which had less than 4,000 recipients in 2021, according to Scouts BSA records.

Part of the reason behind that is AFTAC’s Vice Commander, Col. Richard Beckman, himself an Eagle Scout.

“It’s been part of my life since 1986,” he said. “You’ve got a world-class staff here to teach you who have given up their weekend. So please take advantage of it. It’s more than just getting a merit badge, more than just a piece of cloth.”

Among the volunteers were both civilian and military scientists, engineers, analysts and other experts, including one enthusiastic airman who asked his commanders if he could wear a special uniform for the day’s events — a silver three-piece suit complete with a tie decorated with atomic symbols.

Fans of the TV show “I Dream of Jeannie” may have spotted AFTAC’s former offices at the base in the season one opening credits, including the rockets and missiles that stood on display upright in front along State Road A1A for years. The rockets have long since been removed and AFTAC opened up its new $158 million facility in 2014.

A good portion of the event involved speakers name-dropping about 40 elements, talking about AFTAC’s mission, and breaking down the physics of smashing atoms together while tossing candy rewards to scouts that asked questions to be eaten later as a “test of patience.”

One thing every one of the 62 boys and girls who came from 13 troops learned was the acronym ALARA, which means “As Low As Reasonably Achievable,” referring to efforts to protect against radiation. They also learned that the three ways to achieve that are through time, distance and shielding.

It’s an approach that covers everything as simple as people using sunscreen to NASA spacesuits to deal with cosmic rays.

Previously known in Boy Scouts as the Atomic Energy merit badge, requirements had the children building a 3D model of an element using pretzels, gumdrops and marshmallows, participating in hands-on demonstrations such as the use of Geiger counters and pouring liquid nitrogen over fresh flowers to turn them into crumbly flakes.

“In case you hadn’t noticed, we’re a bunch of nerds,” said Troy Porter, retired from the Air Force and now a civilian AFTAC lab equipment technician as well as scoutmaster for Troop 314 in West Melbourne.

The children were separated into groups each named after radioactive elements: Neptunium, Plutonium, Americium, Curium, Thorium and Uranium.

While touring the radiochemistry lab, participants learned the value of sticky tape at the entrance of each room so that outside contaminants don’t migrate in on shoes. Each stop on the tour sparked curiosity among the scouts who ranged in ages from 11-17.

“You all are asking some seriously hard questions, it’s impressive,” said civilian lab chemist Da’Monie McRae, who showed off a cloud chamber so the scouts could actually see particles moving across a petri dish.

On the tour, speakers discussed how samples will come in, get stuck in protective chambers from which to pull samples, and then sent to the analysis rooms with row upon row of lead chambers hooked up to liquid nitrogen tanks that are constantly running analysis.

Most samples don’t come back with anything beyond normal alpha and beta radiation levels. The more dangerous X-Ray, gamma and neutron levels could be found from a source that had been subject to nuclear fission.

Many on site juggled the seriousness of the mission with an obvious love for the job, including civilian chemist Lawrence Wolfe, who was able to demonstrate the $2 million mass spectrometer in the lab.

A fan of dad jokes, he had scouts turn the crank on the hardware to heat up a filament to 1,000 degrees Fahrenheit, part of the process to figure out what elements are in some of the samples that make their way to the lab from more than 3,600 sensors around the globe.

“Don’t trust atoms, they make up everything,” he said.

As the outreach event acts as a recruiting opportunity for the Air Force, AFTAC commander Col. James A. Finlayson made an appearance to thank the scouts for their interest and hand out an award to the most inquisitive mind of the day.

“This is a great opportunity for me to recognize the future of America. … I am a huge advocate of lifelong learning, and events like this are paramount to our nation’s success,” he said. “Next year, we want to see even more scouts and volunteers out here.”