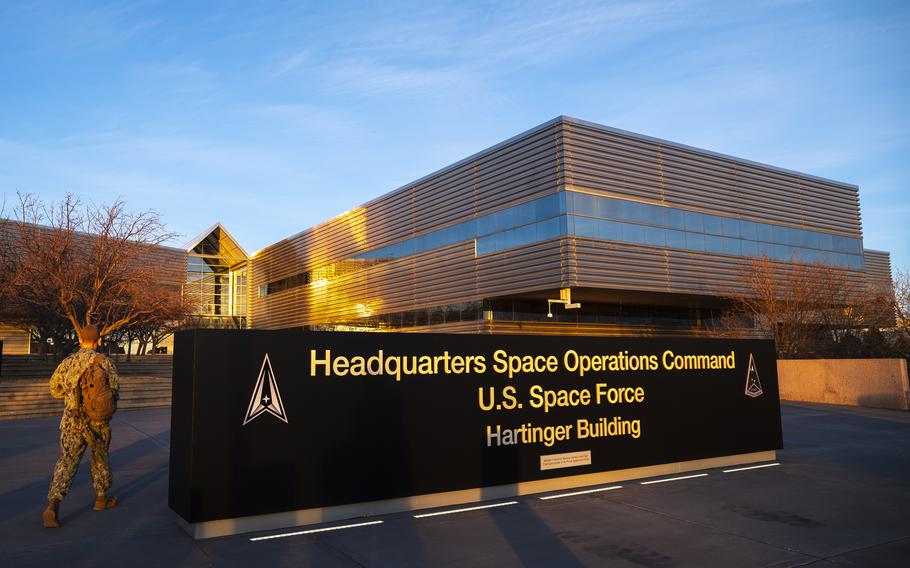 Headquarters Space Operations Command is currently at Peterson Space Force Base, Colorado. Military leaders had recommended that the command remain in Colorado Springs, and Colorado lawmakers have posited that the decision to move it was more political than strategic. ( JT Armstrong/U.S. Space Force)

(Tribune News Service) — The long-awaited decision on the final location of U.S. Space Command is coming soon, according to a report from Military.com.

Gen. James Dickinson, commander of U.S. Space Command, told the online publication last week that a final determination on whether command headquarters will remain in Colorado Springs or be uprooted to Huntsville, Ala., is imminent.

The decision will serve as the culmination of nearly two years of heated discussion and debate that began in January 2021 when the Trump administration made the surprise announcement that headquarters would be moved from its provisional home in the Centennial State.

"I think the decision is going to come out shortly," Dickinson told Military.com. "I don't have a date or time. That is a decision by the secretary of the Air Force."

Military leaders had recommended that the command remain in Colorado Springs, and Colorado lawmakers have posited that the decision to move it was more political than strategic — an outgoing president's last-ditch effort to reward a state that supported him, and to punish a state that didn't vote for him.

"I believe, based on inside information, that politics must have played a role," U.S. Rep. Doug Lamborn, R- Colorado Springs, said when the decision was announced. "By any standard, Colorado would come out on top of any competition."

The former president seemed to confirm Lamborn's assertion in August 2021 when he spoke on a local Alabama radio show. On the "Rick & Bubba" show, Trump said the decision to move Space Command to Alabama was his alone.

"Space Force — I sent to Alabama," he said. "(They) said they were looking for a home, and I singlehandedly said, 'Let's go to Alabama.'"

Colorado lawmakers argued that, politics aside, moving the command to Alabama instead of keeping it in an already-established location would be cost-prohibitive and time-consuming, potentially allowing China to narrow the gap in the space race.

Lamborn joined Democratic Sens. Michael Bennet and John Hickenlooper in calling for an investigation into what role politics might have played in the decision, which Lamborn said could "damage America's national security and erode our competitive edge in space."

This year, two federal watchdog investigations — from the Government Accountability Office and the Pentagon's Office of Inspector General — found Trump's decision to be fundamentally flawed but stopped short of recommending that it be reversed.

"Neither of the reviews recommended the Department of the Air Force reopen the evaluation process," said Sarah Fiocco, with the Air Force Press Desk.

Lamborn and other lawmakers have expressed a desire for President Joe Biden to reverse Trump's decision by executive order, but the current administration has shown no indication that it intends to do so.

In his final State of the City address in September, Mayor John Suthers vowed that Colorado Springs and the rest of the state would continue to fight to keep Space Command in the city, where it will best serve national security interests and preserve "the largest sector of our economy."

"I'm very pleased that the ill-advised decision of the Trump administration to move U.S. Space Command from our city is being exposed as clearly contrary to our national defense interests and contrary to the interests of the American taxpayer," Suthers said.

"Be assured our city will continue to wage the fight in Congress, at the White House, and in the Pentagon to retain Space Command and attract any space-related missions that are looking for a home."

Even as the decision process appears to approach its final hour, Colorado lawmakers continue to plead their case. In September, Bennet and Hickenlooper sent a letter to Air Force Secretary Frank Kendall, warning of the potential financial and security costs of moving the command to Alabama.

"We ... urge you to consider critical cost and national security factors as you review Space Command's pathway to Full Operational Capability (FOC) ... prior to the issuance of a final decision," they said.

As 2022 nears its end, a monumental decision looms, with the fortunes of two states, Colorado and Alabama, hanging in the balance.

"I know that Secretary Kendall has been doing a very methodical analysis of those two reports," Dickinson said. "And so, quite frankly, I look forward to the decision."