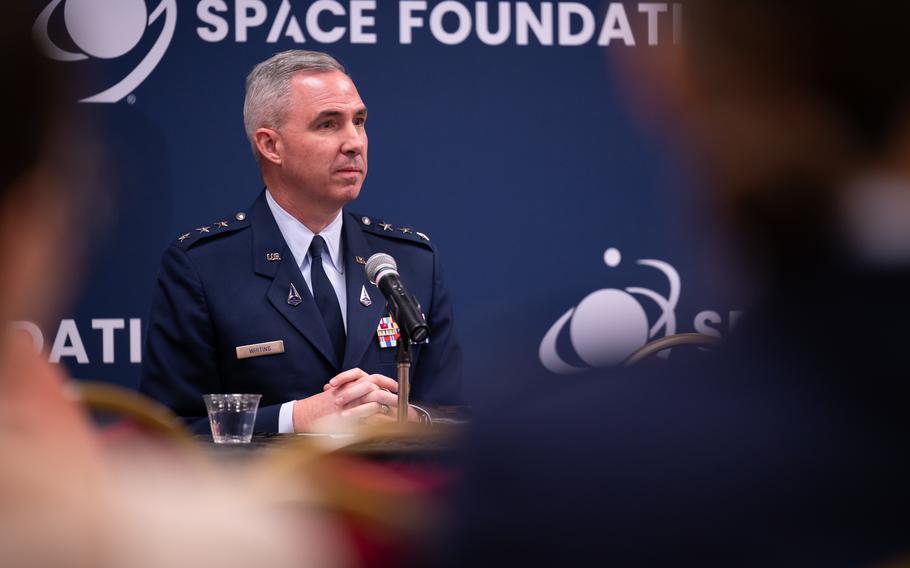 Lt. Gen. Stephen Whiting, chief of Space Operations Command, is pictured at an event in April. Whiting said Friday, Oct. 14, 2022, that the future of global military operations in space will be shaped by the United States, and success will rely heavily upon elements such as private partnerships and new advances in the cyber realm. (Kirsten Brandes/U.S. Space Force)

WASHINGTON — The future of global military operations in space will be shaped by the United States, and success will rely heavily upon elements such as private partnerships and new advances in the cyber realm, a top Space Force general said Friday.

Lt. Gen. Stephen Whiting, who is the chief of Space Operations Command, made the remarks during an interview at the Center for Strategic and International Studies, a Washington-based think tank that studies policy and security issues worldwide.

Whiting said the command has so far led the way in creating an environment in space that will serve U.S. defense interests and capabilities in the years to come.

“Throughout the 60s, 70s and even into the 80s, space was highly competitive,” Whiting said. “We have a history of this kind of competitive, contested domain, but we did go through a long [dormant] period after the [Berlin Wall] came down in the early 1990s until the Chinese [anti-satellite] test in 2007.”

“We take very seriously that responsibility to provide those effects – but to do that, we have to create the freedom of action,” he said.

Three of the most important elements of achieving SpOC’s mission in space warfighting, the general noted, are intelligence gathering, partnering with commercial space entities and enhancing cyber defenses.

Shoring up cyber defenses, however, is expected to be more difficult.

“This is a tough nut for us,” he said. “How do we measure risk in the cybersecurity area?”

Whiting said the answer is challenging because decades of success involving physical security conditions – such as those that protect military installations and government buildings – cannot merely be applied to cyber defenses.

“We do not have the same tools or intuitive understanding of how to assess our cyber risks,” he said. “I don’t want to act like we don’t have any of those tools, but it’s not the same comprehensive understanding we have for physical security.”

Various space threats to U.S. interests – such as satellites – include electromagnetic attacks, GPS signal-jamming and directed energy capabilities, Whiting said. And again, the private sector is expected to offer some of the solutions.

“Those are all threats that we now face and it’s not just the Space Force,” he added. “Much of the things that we’re going to be interested in are now being accounted for by commercial industry.”

Whiting expanded on the importance of private partnerships to include protection. Russia, for example, has said it considers private companies that are working with Ukraine to be legitimate military targets. No distinction is being made between Ukrainian troops and commercial personnel from whom they receive support.

“I think we will see that same dynamic play out in space. And there are processes for how we go about working with companies ... to defend [them],” he said.

Whiting, 55, served for more than 30 years in the Air Force before he took over as the first commander of Space Operations Command in 2020. He was deputy commander when the command was a component of the Air Force.