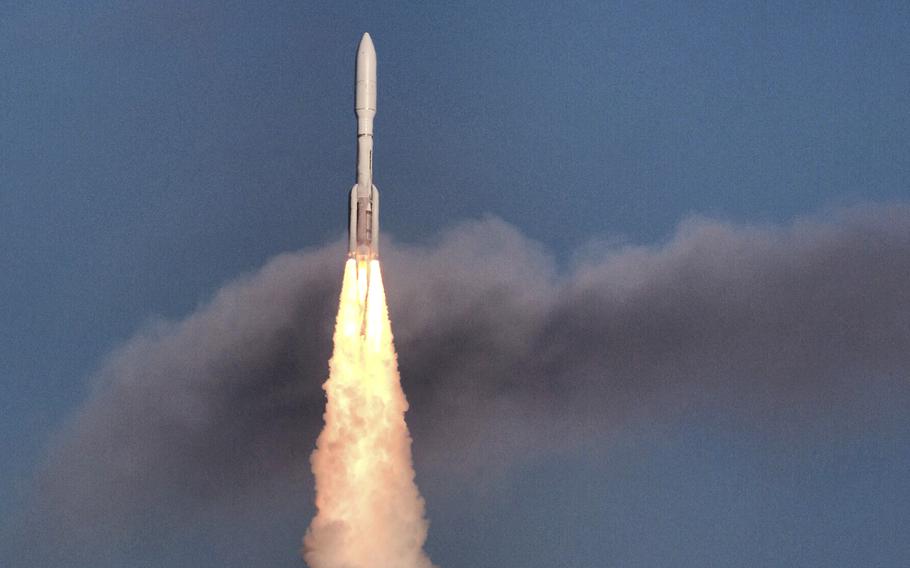 The rocket lifted off from Space Launch Complex 40 shortly after 7 p.m., after being delayed on Thursday due to bad weather.

On board was two satellite payloads including the Wide Field of View (WFOV) Testbed developed by L3 Harris based on a Millennium Space Systems platform to be used for tracking missile threats. Also on board is the Space Test Program's USSF-12 Ring spacecraft, built by Northrop Grumman, which itself will be hosting classified payloads. Both the WFOV and Ring spacecraft are headed for geosynchronous orbit approximately 22,000 miles above the equator.

"We're focused on integration of an end-to-end mission capability for resilient space-based missile warning tracking and defense to prevail what is a fast-evolving threat, particularly in hypersonic missile threats across the globe," said Col. Brian Denaro, Program Executive Officer for SSC's Space Sensing Directorate. "The change in the threats we see coming online today are highly maneuverable, and so it's harder to predict where those missiles are going to go, therefore the need to be able to track those missiles through their course of flight."

The WFOV experiment, will cast its more sensitive eye over more than one-third of the Earth across the Pacific during a planned three-year test run. It's a prototype that's a first step in what Denaro said is the Space Force's No. 1 mission, planned to be part of a future satellite architecture that would provide 24/7 coverage of global missile threats.

"The Atlas V has been a very good, reliable launch vehicle for us," said Space Force Col. Erin Gulden. "It's placed valuable national assets into the intended orbits, which has added to our national security space launch program of unprecedented success for over the past 90 consecutive launches since 2003."

The flight is the fourth for ULA this year, still using the workhorse Atlas V rockets that will soon be replaced with the new Vulcan Centaur.

The previous ULA missions included last month's launch of the Boeing CST-100 Starliner to the International Space Station. The company has set aside enough Atlas V rockets to complete its contract with NASA for ferry service via the Starliner to the station through at least 2025.

Its future Vulcan rocket is capable of the service, as well, but Boeing has yet to request certifying that rocket for future Starliner flights. All the remaining Atlas V rockets are spoken for as well, with many tied to launches for Amazon's Project Kuiper, an internet satellite constellation set to compete with SpaceX's Starlink. That project has also bought up 38 Vulcan flights as well.

The Vulcan's first launch is on track to come before the end of the year, said ULA's VP of Government and Commercial Programs Gary Wentz. It has two certification flights on tap before its first launch for the Department of Defense in late 2023, the first of three on its manifest for the Space Force that year.

"We have seen no loss or missed opportunities for delivery of capability,: Gulden said. "We've got ULA providing a great Atlas fleet and Delta fleet for what we need today, and Vulcan is on track for delivery for that first acquired mission at the end of next year, so I would say from the Space Force perspective, we don't see any issues or concerns at this point in a gap in capability or ability to launch."

The new ULA rocket has faced delays including the delivery of its engine, the BE-4, from Jeff Bezos' Blue Origin. ULA expects delivery of its first usable engines this summer. It's part of the new U.S. requirements to steer off of Russian-made rocket engines by 2022. Blue Origin's in-the-works New Glenn rocket will also be using the BE-4, but its first launch is not expected until 2023 after it's satisfied its supply contract for ULA.

To date ULA has flown 151 missions since the joint venture between Lockheed Martin and Boeing was formed in 2006. It's been the DOD's go-to launch provider until recently branching out to SpaceX. The future could see more launch service providers as well as they come online such as Astra Space, Relativity and Blue Origin.

"We're looking to the future. We are working together with our current industry partners that provide our current launch services," Gulden said. "Future launch services as industry continues to build capabilities and technology — just as we have done with other new entrants, we will continue to work with those entrants and if they're able, capable and willing to contract within U.S. government and United State Space Force, we'll be willing to include them in our future launch opportunities to provide those critical national capabilities that are required."