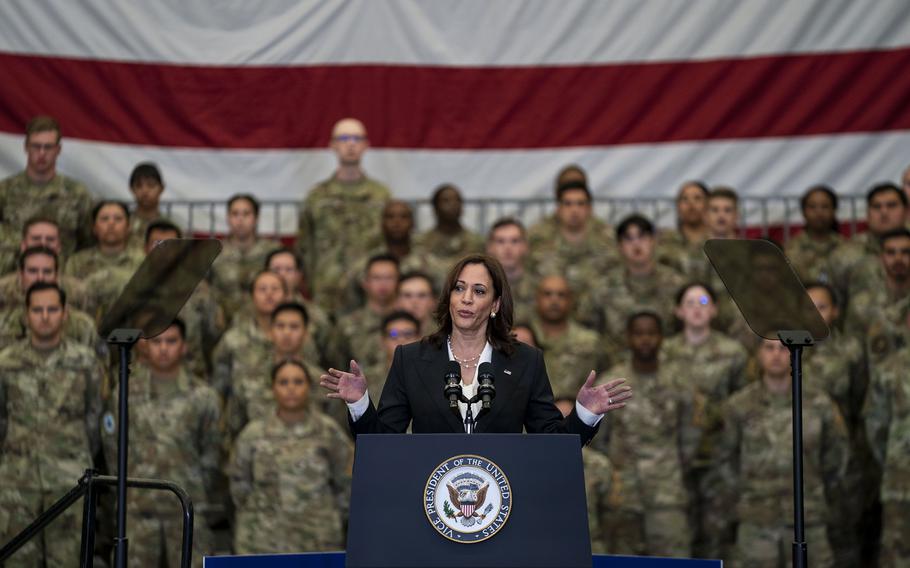 VANDENBERG SPACE FORCE BASE, Calif. (Tribune News Service) — Vice President Kamala Harris kicked off a weeklong trip home to California on Monday with a stop at Vandenberg Space Force Base, where she said the U.S. would halt testing of satellite-killing missiles to reduce the threat posed by space debris.

The self-imposed ban comes amid rising tensions with Russia over its invasion of Ukraine and Moscow’s decision in November to test a missile that blew up one of its own satellites. That explosion polluted low-Earth orbit with more than 1,500 pieces of dangerous debris, forcing the crew of the International Space Station to take shelter.

Even a tiny bit of such space junk could damage or destroy a satellite, space station or spacecraft. The U.S. and its allies have sharply criticized the Kremlin over the test, with Harris in December calling it “an irresponsible act.” China used a missile in 2007 to destroy one of its satellites, a blast that continues to litter space with nearly 3,000 pieces of debris.

“These tests are dangerous, and we will not conduct them,” Harris said in a speech to the base’s military personnel, noting how the resulting debris can endanger the lives of astronauts and imperil satellites that provide “the daily weather forecast, GPS driving directions, and even your favorite television station.”

Harris said she hoped the U.S. action would spur other countries to join in halting such tests.

“The United States is committed to lead the way and to lead by example,” she said.

The U.S. appears in 2008 to have last used a missile to destroy a satellite that was malfunctioning. U.S. officials said that within a week all the resulting debris had left the orbit.

The U.S. has imposed a raft of harsh economic sanctions, including some aimed at the Russian space industry. It is not clear how the invasion will affect operations of the International Space Station, which is operated jointly by the U.S., Russia and other countries. The station, which has been in operation for more than two decades, has been heralded as an example of post-Cold War cooperation.

The Trump and Biden administrations ramped up efforts to counter competition from Russia and China in space. Trump created the Space Force as a new branch of the military, while Biden has continued to invest in its existence. The White House budget request unveiled last month included $24.5 billion for the Space Force, a nearly 40% bump over the previous year and nearly the $26 billion Biden requested for NASA.

Before delivering her remarks at Vandenberg, Harris received a briefing from military personnel on U.S. efforts in space and the dangers posed by anti-satellite missiles.

She was next to fly to Los Angeles, where she was scheduled to appear at a Democratic fundraiser Monday night. Harris, who has a home in Brentwood and served as one of California’s two U.S. senators before ascending to the vice presidency, is scheduled to deliver a speech in San Francisco on maternal health on Thursday before returning to Washington on Monday.