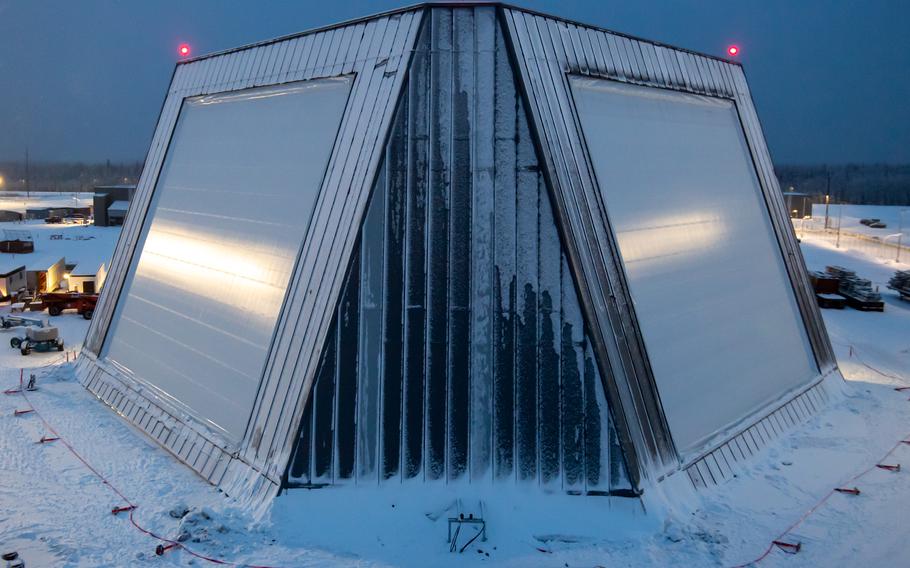 (Tribune News Service) — A new milestone was reached Monday in the creeping militarization of space.

"Once fully operational, LRDR will provide unparalleled ability to simultaneously search, track and discriminate multiple small objects, including all classes of ballistic and, in later iterations, hypersonic missiles, at very long ranges, under continuous operation," heralded the Missile Defense Agency in a press release.

Now that the cutting-edge radar is installed inside a newly constructed facility nearly five stories tall, a testing and training phase will begin, with the device expected to be fully integrated and operational by 2023. Once testing is finished, control of the radar will change from the Missile Defense Agency to the U.S. Space Force.

"You have built an extra set of keen eyes that will paint the picture of any threat coming our way," said Lt. Gen. A.C. Roper with the North American Defense Command.

The LRDR has an enormous field of vision over huge swaths of the Pacific theater and is touted for its ability to quickly spot and identify complex components from intercontinental ballistic missiles launched high into the atmosphere. For example, the sensors can track debris and decoy objects kicked out as a missile's boosters drop away and a warhead descends back toward earth. The radar functions as the early warning system in the military's missile defense strategy, with ground- or sea-based projectiles launched to hopefully destroy an incoming ICBM before it can hit its intended target.

After the brief ceremony and distribution of commemorative plaques, attendees were offered cake and punch before heading out on tours. Afterward, military officials held a roundtable with media calling in from around the country.

A number of questions focused on hypersonics, the emerging class of missiles that are super fast, highly maneuverable, and can fly low enough to evade many defense systems. While the U.S. has started developing hypersonic weapons, China and Russia are widely believed to be substantially further ahead in incorporating them into their military arsenals.

"The primary driving requirement," said Vice Adm. Jon Hill of the U.S. Missile Defense Agency about the LRDR, "is against the ballistic missile threat. That is what the radar filters are designed to go after."

It's unlikely there would be additional hardware necessary for the LRDR to be reconfigured for tracking hypersonics in the future, Hill said.

The radar was specifically put in Alaska because of its vantage over the Indo-Pacific region to spot ICBM's that could potentially be launched by North Korea.

"Alaska gives us a field of view we need to do homeland defense," said Lt. Gen. David A. Krumm, who is in charge of Alaskan Command, the Eleventh Air Force, and Alaska's NORAD assets, including the radars that feed information back to bases in the Lower 48.

The price tag for the LRDR's installation at Clear is around $1.5 billion. Construction and installation of the radar, which was built by defense contractor Lockheed Martin, was slowed because of the pandemic.

The LRDR will not replace the network of Long Range Radar stations across Alaska, which since the Cold War have been in place to monitor for encroaching aircraft and long-distance bombers. Krumm said the new capabilities are a complement to the existing radar systems.