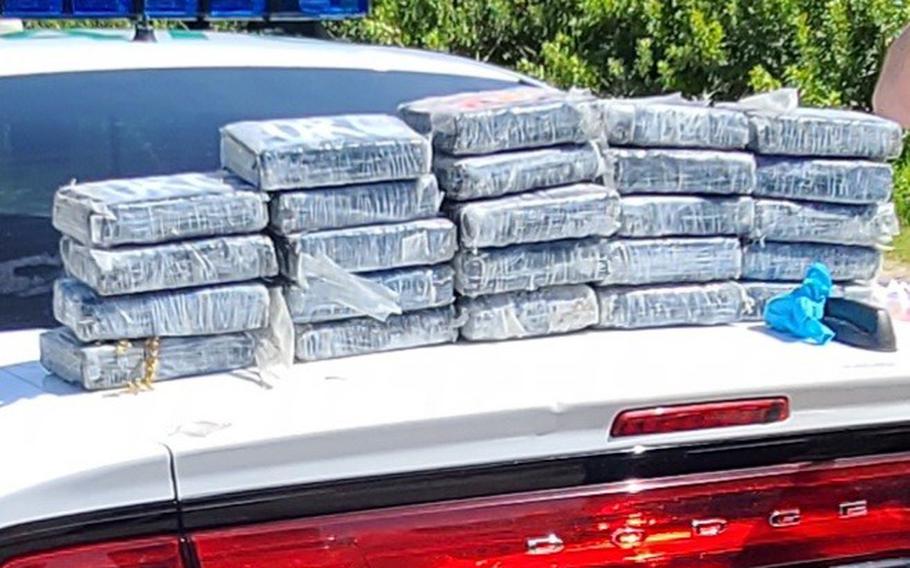 The 45th Security Forces Squadron seized nearly 30 kilograms of cocaine that was found on a beach at Cape Canaveral Space Force Station, Florida, May 19, 2021. The Brevard County Sheriff's office estimated the street value of the drugs to be around $1.2 million. (U.S. Space Force)

A wildlife manager was checking on sea turtle nests at Cape Canaveral Space Force Station in Florida when she discovered bundles that turned out to be 30 kilograms of cocaine with a street value of $1.2 million.

Angy Chambers of the 45th Civil Engineer Squadron was patrolling the beach on Cape Canaveral last month when she came across a package wrapped tightly in plastic and tape.

“I immediately contacted the 45th Security Forces Squadron,” she said in a Space Force statement. “While I was waiting for them to arrive, I drove a little further and noticed another package, and then another.”

She suggested the security forces bring a utility terrain vehicle, “as I counted at least 18 packages,” the statement said.

Joseph Parker, the squadron’s flight sergeant and on-scene commander, closed all beaches and started search protocols, which eventually turned up a total of 24 packages.

A Brevard County Sheriff’s Office narcotics agent performed a field test to verify that the bundles contained cocaine, Parker said in the statement. The sheriff’s office estimated the value of the drugs at about $1.2 million.

Drug traffickers will often transport shipments in bales of 25 “bricks,” each weighing about a kilogram, said David Castro, an agent with the Department of Homeland Security’s main investigative arm, Homeland Security Investigations. Sometimes those bales break apart and the bricks are lost at sea until they wash ashore, he said. Cape Canaveral is located on Florida's Atlantic coast, near Cocoa Beach and the Kennedy Space Center. The Space Force station is home to the service’s primary space launch site in its eastern range, operated by Space Launch Delta 45, headquartered at nearby Patrick Space Force Base

Castro collected the drugs after they were transported to a secure location, weighed them, conducted field tests and examined the packages for unique markings.

Space Launch Delta 45 officials didn’t immediately respond to questions about what distinctive markings the bundles bore, but authorities in Alabama, Puerto Rico, Chile and Honduras this year have reportedly started recovering packages bearing a rare symbol — photos of Medellin Cartel drug lord Pablo Escobar, the “King of Cocaine" who was killed in a 1993 shootout.

Intelligence that Castro gathered from the packages in Cape Canaveral was provided to the El Paso Intelligence Center, a repository for information about drugs found in the U.S., the Space Force said.

Homeland Security officials were still investigating where the drugs came from, but Parker was thankful for Chambers' vigilance.

“There is also a higher level of job satisfaction knowing that these drugs will not make it into our community,” he said.