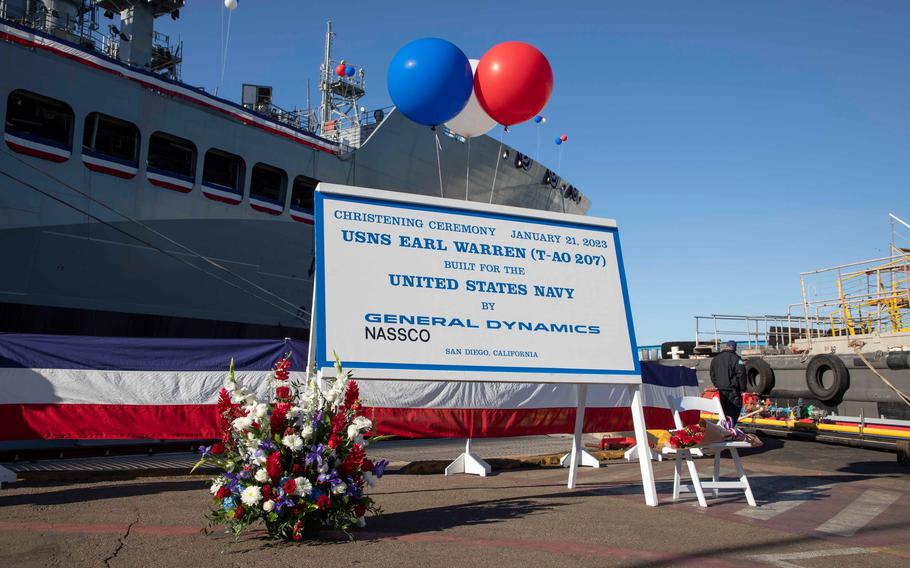 SAN DIEGO (Tribune News Service) — Earl Warren, the late Supreme Court Chief Justice who presided over society-shaking civil rights changes in the 1950s and 60s, including ending racial segregation in public schools, was honored Saturday in San Diego by the Navy which christened a 746-foot fuel ship in his name.

The act was carried out with a hearty swing of a champagne bottle in front of a private audience of 300 people at General Dynamics-NASSCO, the ship’s builder.

Acting on behalf of the Navy, Supreme Court Justice Elena Kagan slammed the bottle against the gunmetal gray hull of the USNS Earl Warren, a John Lewis-class replenishment oiler, causing a frothy explosion that left her covered in bubbly.

“If you ask, well, who is it that contributed so greatly to the civil rights struggle, and particularly to the struggle to ensure racial equality in our nation, Earl Warren has got to be among the top people on the list,” Kagan said.

She said his greatness was particularly apparent in 1954 when the so-called “Warren Court” unanimously ruled in Brown v. Board of Education that state-sanctioned segregation in public schools violated the 14th Amendment.

Before the ruling, schools could segregate Blacks and Whites, provided that their facilities were equal.

Segregationists called for Warren’s impeachment at a fraught moment in American history.

“We live in one society, a society in which people of all races are treated with equal dignity and equal respect,” Kagan said. “In 1954, none of that was inevitable.”

Saturday’s christening represented something of a history lesson about Warren — who was elected governor of California three times. It was also emblematic of a shift in tradition for the Navy.

Historically, most Navy vessels have been named after war heroes, battles, presidents, states, cities, counties and lawmakers. Navy Secretary Ray Mabus, a Mississippi native, shook things up more than a decade ago when he started naming a significant number of cargo and fuel ships after civil rights and human rights leaders.

Some people accused him of politicizing the naming of ships. He disagreed, saying in 2016, “I think you have to represent all the values that we hold as Americans, that we hold as a country. And so that’s why I’ve named ships the Medgar Evers, Cesar Chavez, John Lewis, the Harvey Milk. Because these are American heroes too, just in a different arena.”

All four of those ships were built at NASSCO. So was the Earl Warren. The company is building or will build vessels bearing the names of Robert F. Kennedy, Lucy Stone, Sojourner Truth, Thurgood Marshall and Ruth Bader Ginsburg.

The influence of Mabus and Warren was applauded at Saturday’s ceremony by current Navy Secretary Carlos Del Toro, a Cuban immigrant.

“America represents a fierce and stubborn belief in a society governed by principles, grounded in justice, human rights,” he said. “We’re still a nation in pursuit of a more perfect union.”