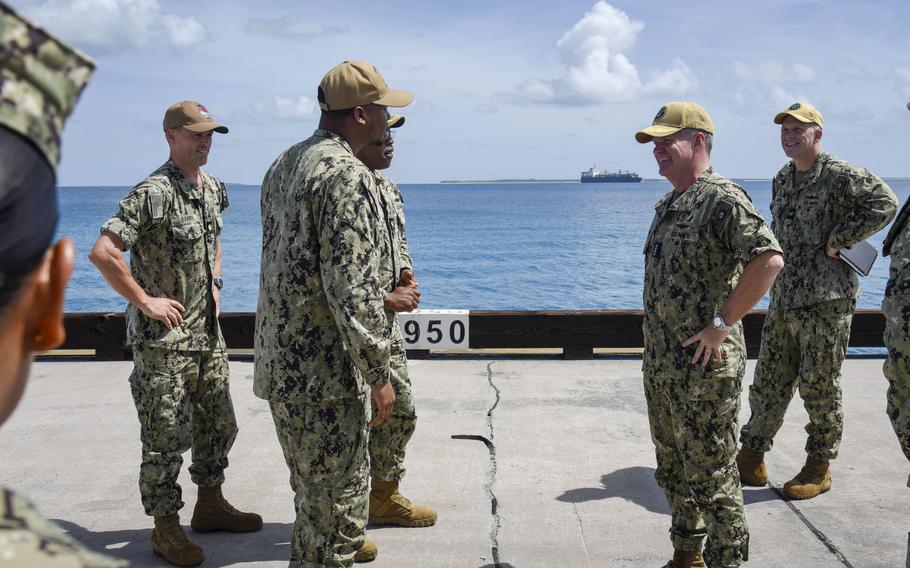 Negotiations now underway between the United Kingdom and a tiny Indian Ocean nation could have significant repercussions for a strategically located U.S. Navy installation on the island of Diego Garcia.

The British Indian Ocean Territory, which includes Diego Garcia, has been mired in controversy since the late 1960s when the British expelled the roughly 2,000 island inhabitants to clear the way for construction of a joint U.K.-U.S. military base.

Naval Support Facility Diego Garcia hosts units from the U.S. Navy, Air Force and Space Force and the U.K. Royal Navy. Located in the center of the Indian Ocean, the island’s airfield can accommodate bombers, which are in relatively close range of Middle Eastern and South Asian hotspots.

Most of the locals forced out 50 years ago ended up in Mauritius and the Seychelles, where many have for decades petitioned to return to the island.

Mauritius has also maintained it holds rightful sovereignty over the entire British Indian Ocean Territory, which is made up of roughly 1,000 mostly tiny islands. The U.K. has consistently rejected Mauritius’ claims and insisted that returning the original inhabitants would not be feasible.

Last month, the U.K. and Mauritian governments announced they would begin negotiations to resolve “all outstanding issues” on the territory, according to a Nov. 22 brief published by The House of Commons Library, a research arm within the U.K. Parliament.

U.S. officials have shown no inclination to abandon the island, a position highlighted last week during a visit to Diego Garcia by the head of U.S. Pacific Fleet.

Adm. Samuel Paparo spent Thursday and Friday meeting with the installation’s leadership, uniformed personnel and contract workers to discuss the importance of the facility for supporting operational forces deployed to the Indian Ocean, the Navy said in a news release Friday.

“The visit underscored the strategic importance of Diego Garcia to an enduring free and open Indo-Pacific by enabling presence, assured access, and defense to the global commons,” the news release stated.

Some British and American observers are concerned that China would fill any vacuum created by a withdrawal of U.S. and British military presence on Diego Garcia.

During a meeting last month of the House of Commons Foreign Affairs Committee, Henry Smith, a Conservative Party member of Parliament, asked the U.K. foreign secretary for assurances that the negotiations with Mauritius would have “an absolute red line” on British and U.S. security interests, particularly as they concern China.

“I can give an absolute assurance in that regard,” James Cleverly responded. “This is an issue that we take incredibly seriously. We are very alive to that, and we will make sure that that is at the heart of the British position on the negotiations that we have in Mauritius.”

Fellow Conservative lawmaker Daniel Kawczynski said he was contacting U.S. lawmakers to “sound the alarm” about the negotiations, according to a Dec. 2 article by the London-based tabloid Daily Mail.

“If you look at the amount of investment the Chinese have in Mauritius, I would argue that for all intents and purposes they control Mauritius,” Kawczynski told the newspaper.

“They have a policy of hoovering up all of these islands in the South China Sea … the idea the Chinese are not going to take advantage of us giving up these islands is wrong,” he said.

U.S. Rep. Mike Waltz, the ranking Republican on the House Armed Services Subcommittee on Readiness, told the Daily Mail that the subcommittee should look into the issue.

But Blake Herzinger, an Indo-Pacific defense policy expert and a nonresident fellow at the American Enterprise Institute think tank, wrote last year that concerns about the U.S. being ousted from the island are overblown.

The Mauritian government “has sought to assuage those fears by offering, twice, to lease the land to the US for up to 99 years, if it is returned to their control,” Herzinger wrote in an essay published online Feb. 15, 2021, by the Australia-based think tank Lowy Institute.

In addition, Mauritius’ ambassador to the United Nations has said he favors continued U.S. presence at Diego Garcia, Herzinger wrote.