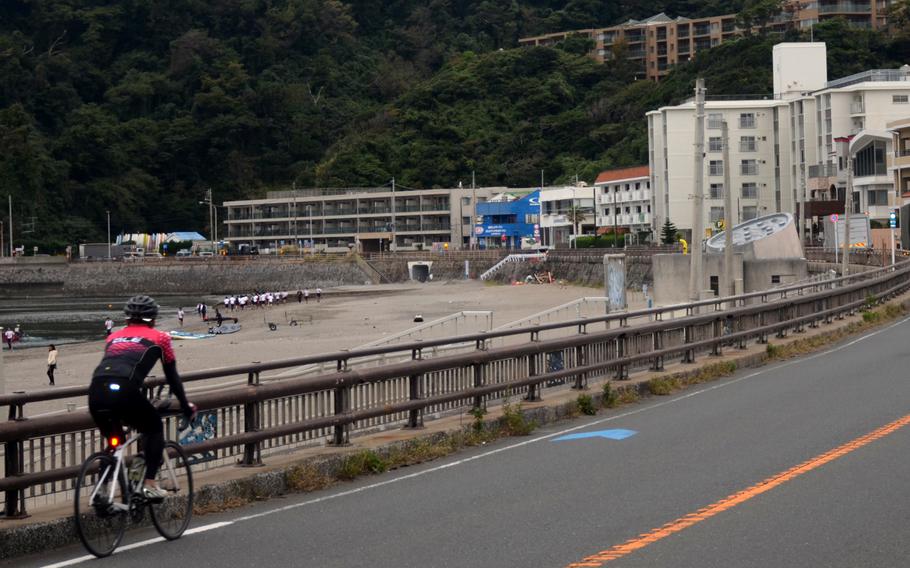 A U.S. Navy sailor stationed at Yokosuka Naval Base allegedly charged into a group of Japanese citizens at the beach in Zushi city on July 9, 2022. (Alex Wilson/Stars and Stripes)

YOKOSUKA NAVAL BASE, Japan – Japanese prosecutors on Tuesday indicted a U.S. sailor accused of injuring several people by charging into them at a popular beach near the homeport of the U.S. 7th Fleet.

Daniel Krieger, 29, was charged with bodily injury of four people, a spokesman for the Yokohama District Public Prosecutor’s Office in Yokosuka city told Stars and Stripes by phone Thursday. The spokesman provided the sailor’s name in Japanese but declined to specify his assigned unit and rank.

Japanese government spokespeople are customarily required to speak to the media on condition of anonymity.

A spokesman for Yokosuka Naval Base, Randall Baucom, on Oct. 25 confirmed the sailor is stationed there but declined comment Thursday on the indictment.

The charges stem from a July 9 incident in Zushi in which Krieger allegedly slammed physically into a group of five people from behind and knocked them down, according to the prosecutor’s spokesman.

The indictment alleges Krieger then kicked a 33-year-old person in the back, spraining their cervical and lumbar vertebrae, the spokesman said. Kanagawa Prefectural Police on Oct. 24 identified the 33-year-old as a man from Tokyo.

The sailor also allegedly slammed into another 33-year-old, who fell backward into a 25-year-old. Those people were not identified by gender by the police or prosecutors.

Prosecutors said Krieger also allegedly knocked down a 58-year-old whom police identified as a woman. She suffered a broken upper jaw, a broken nasal bone and other facial injuries, according to prosecutors.

Kanagawa police on Oct. 21 recommended charging Krieger with bodily injury of five individuals, but prosecutors indicted him on four, the spokesman said.

The Zushi Municipal Assembly passed a unanimous resolution Sept. 6 demanding the U.S. military apologize for the incident, compensate the injured and increase oversight of service members at Zushi Beach, 7 1/2 miles west of the naval base.

“The incident is a serious criminal act that Zushi city has not experienced in recent years,” the resolution said. “It is absolutely unacceptable that it caused fear and anxiety; not just to the victims, but to Zushi citizens.”

The resolution also urged the U.S. military to educate its service members on Japanese law and discourage them from visiting Zushi.

U.S. Forces Japan acknowledged a request for comment on the resolution on Thursday but didn’t respond by the close of business.