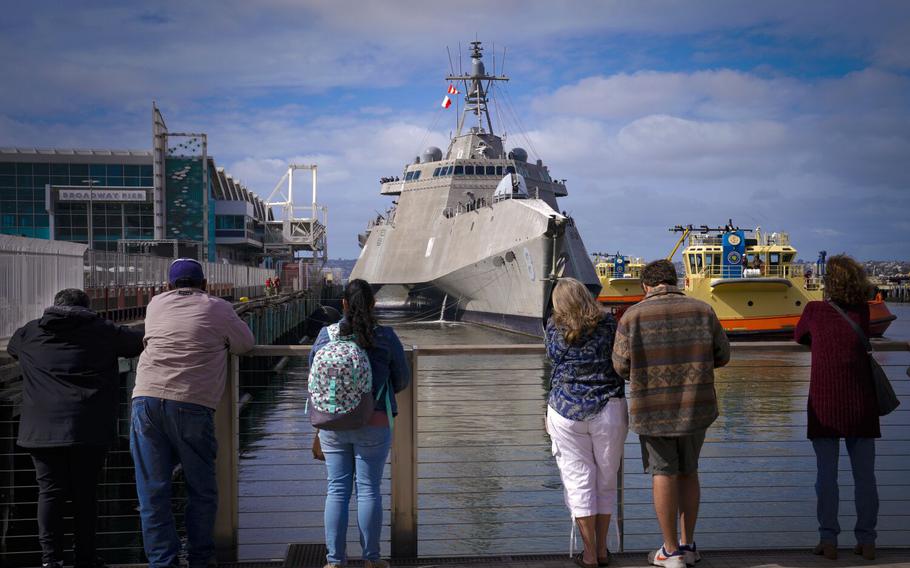 The USS Montgomery (Independence-class littoral combat ship) pulls up and prepares to tie-up on the north side of the pier in San Diego on Nov. 2, 2022. U.S. service members were setting up several static displays in preparation for Fleet Week in San Diego. (Nelvin C. Cepeda / The San Diego Union-Tribune)

The Montgomery moored at the pier Wednesday as sailors and Marines began readying equipment for display. The Independence-class LCS features a trimaran hull unique among the Navy’s fleet. The cutter Forrest Rednour is a 154-foot Sentinel-class vessel based in Los Angeles and is scheduled to arrive Friday.

Both ships open for public tours Friday at 1 p.m. and will be open throughout the weekend from 10 a.m. to 4 p.m.

Fleet Week, now in its 21st year, features 10 days of events. The ship tours and accompanying pierside Innovation Zone are the highlight’s of the event’s first weekend. On Student STEM Days Thursday and Friday, the pier will open exclusively to an expected 3,000 local students who will be able to tour the ship and interact with displays from local military units, defense contractors and technology companies.

Military units from the Navy, Marine Corps, Coast Guard and Army are supporting pierside events this weekend, the Navy said.

“ Fleet Week San Diego offers the public an opportunity to take a tour of the ships and meet service members as they showcase ship, vehicle, and equipment capabilities,” said Brian O’Rourke, a Navy spokesperson in San Diego. “Through educational, interactive displays at the Fleet Week Innovation Zone, the public can gain a better understanding of how the sea services support the national defense of the United States and freedom of the seas.”

A Veterans Day boat parade is set for Nov. 11. The parade route will begin at Shelter Island and head to the Embarcadero before crossing the bay to Coronado. Skydivers and vintage aircraft fly-overs will accompany the parade.

The boat parade is the only scheduled parade downtown for Veterans Day — the Veterans Day Parade, which has been on hiatus since 2020, will resume in 2023, according to the USS Midway Museum, which is relaunching the parade.