From stingray encounter to Marine Corps Marathon: A Navy diver's long road back 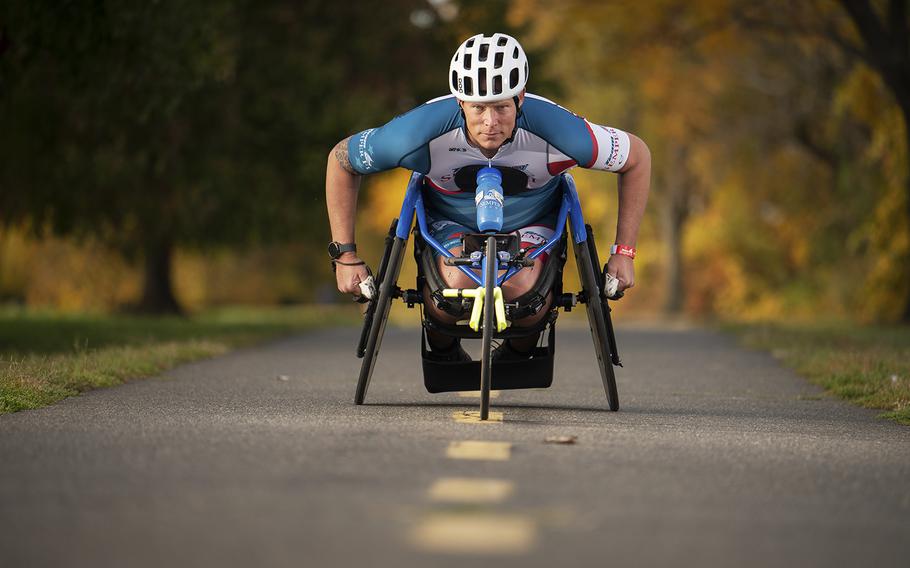 Three years after he medically retired from the U.S. Navy with a permanent disability, former U.S. Navy diver Julius "Jay" McManus is closing in on completing a long-awaited mission: He's preparing to compete Sunday in the 47th Marine Corps Marathon as a push-rim athlete.

"I'm a father of three. I run to show my family and my community that regardless of the obstacles, we can always overcome, we can keep pushing forward," McManus said. "The true reality of it is there's a large selfish part of that, too. I'm not just running to show them, but I'm running to prove to myself that I'm better than my injuries. I'm better today than I was yesterday, and I will continue to improve tomorrow."

McManus joined the Navy in 1997 and entered diving school in 2005. By 2008, he had dived on many recovery missions, including one involving a World War II B-24 off the coast of Papua, New Guinea. However, his diving career shifted after an accident in Panama City Beach, Fla., in 2010.

While on a trip with the Navy Experimental Diving Unit, McManus was stung by a stingray, with the barb remaining inside his patellar tendon. The barb was undetected by initial X-rays and remained in his knee for several months, deteriorating his mobility. This led to six knee surgeries and his eventual retirement from the Navy.

McManus spent a year at the National Intrepid Center of Excellence rehabilitating. His injuries from his time in the Navy included "dead spots" in his brain from a traumatic injury, severe spinal damage, and a lump in his throat from radiation exposure. He was later diagnosed with post-traumatic stress disorder from multiple combat explosions. 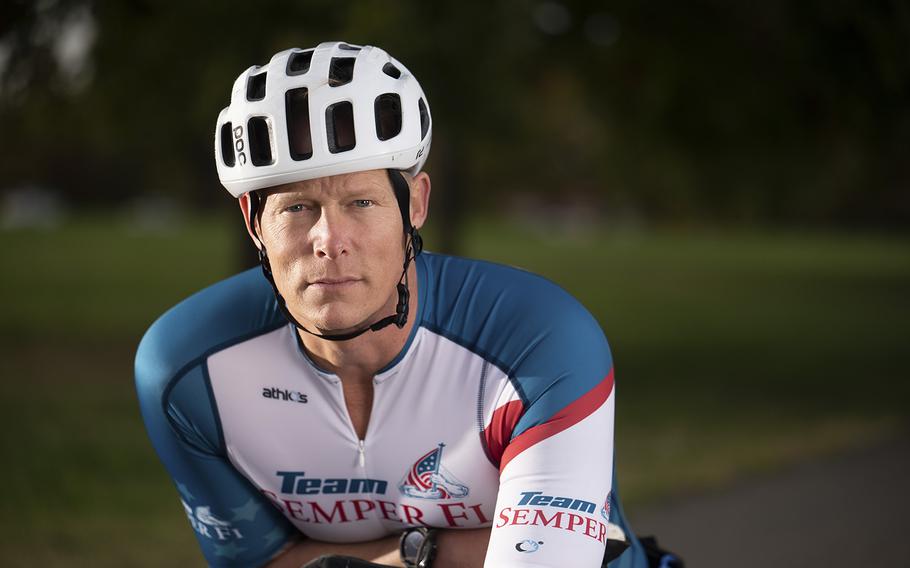 Former Navy diver Julius “Jay” McManus was stung by a stingray on a trip with the Navy Experimental Diving Unit, with the undetected barb remaining inside his patellar tendon for several months and deteriorating his mobility. (Craig Hudson for The Washington Post)

After his treatment, McManus struggled with being separated from his passions and career. He openly discussed his struggles with anxiety and depression.

"I did hit some very dark places. I had made plans to terminate my existence and was trying to find the best way to do it without having a negative impact on my family," McManus said. "I went to an adaptive sports introductory camp with the Navy Wounded Warrior program, and it was through that camp that I found a renewed sense of purpose and a renewed sense of self."

This sparked a reawakening in McManus's competitive spirit. He was reintroduced to push-rim running — different from hand-cycling in both posture (more forward-inclined) and the absence of pedals to propel the athlete; runners use their hands on the rim itself — through the Semper Fi and America's Fund via their "Runner's Batallion" and became infatuated. The organization assists wounded veterans and family members in all branches of military service. Through the fund's sports program, 84 service members will be running and 23 hand-cycling the full marathon this year.

"Jay is one example of many of why I do what I what I do," said Sam Tickle, director of the fund's sports program. "Being a veteran myself, I want to help those that I've served with and those that have come before and after me. It's an incredible feeling. It's a lot of work, but the payoff is beyond words."

Initially, McManus planned to compete as a handcycle athlete. However, when he suggested the possibility of becoming a push-rim athlete, the fund took extra steps to help him reach his goal. It put him in contact with Joey Peters, a research specialist at the University of Illinois, who is one of the U.S. Paralympic coaches for track and field and the marathon. Working with Peters and other coaches, McManus tirelessly perfected his form. Before his training with Peters, his mile time sat around nine minutes. A few months later, his mile time now falls in the four-minute range. After running the Marine Corps Marathon for the past two years virtually, McManus is eager to run alongside his fellow service members and display his hard work.

"The opportunity to run this race in this location with these people . . . it's an honor. It's a privilege," McManus said. "It's hard to imagine what three years of anticipation is going feel like at the end [of the race], but I'm very excited to find out."

While completing the Marine Corp Marathon will mark a significant milestone, McManus already is searching for his next athletic challenge. At the top of the list: Transitioning to paratriathlon with his eyes set on the 2023 U.S. championships.

But first McManus must take care of Sunday's business.

"I'm beyond excited to, after three years of anticipation and training, get to the Marine Corps Marathon," McManus said. "Part of me is absolutely terrified because I've heard stories of the hills. But I'm very confident."