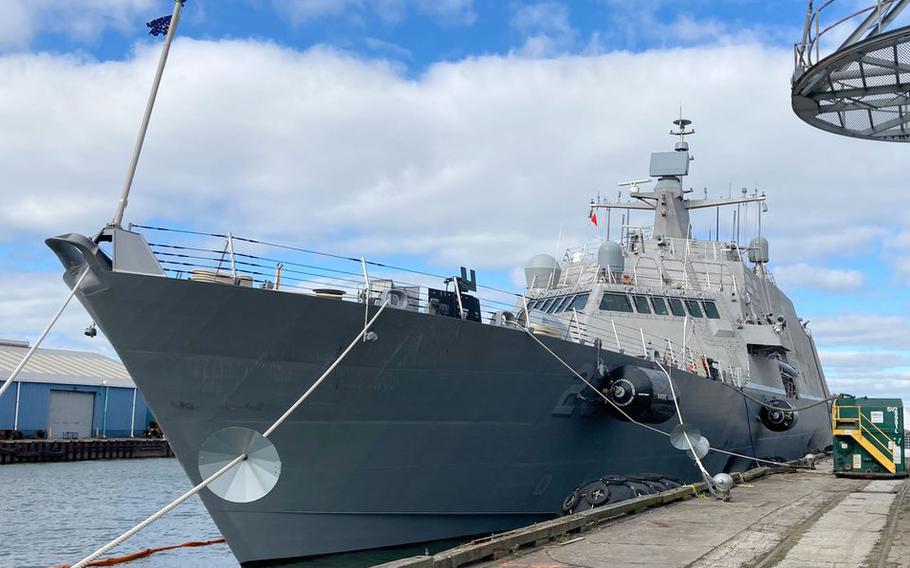 The USS Cooperstown docked at the Port of Cleveland. (Peter Krouse, Cleveland.com/TNS)

CLEVELAND (Tribune News Service) — A warship made its way into the Port of Cleveland on Wednesday, but it came in peace and paying homage to some of baseball’s all-time greats.

The USS Cooperstown, built in Marinette, Wis., for the U.S. Navy, was christened earlier this year and is now on its way to Naval Station Mayport near Jacksonville, Fla., where it will be commissioned.

Its first port of call is Cleveland, where the ship can take on fuel, replace stores and give the crew a little shore leave, said Lt. Brandon Carnes, the ship’s electronic materials officer.

The USS Cooperstown is a littoral combat ship, and the Cooperstown is very fast and agile. Its low draft allows it to operate in shallow water, Carnes said. It’s the 23rd of its kind built by the Navy. The ships are primarily being used for drug interdiction in the Caribbean.

“They run down the fast drug boats and stop them from bringing drugs into America,” he said. Another littoral combat ship under construction for the Navy will be called the USS Cleveland.

But the USS Cooperstown also id a floating museum. It was named for the town in New York where the National Baseball Hall of Fame is located. And that has led to some interesting décor inside the ship.

Seventy members of the National Baseball Hall of Fame who also served in the military are honored with copies of their induction plaques on display, Carnes said. 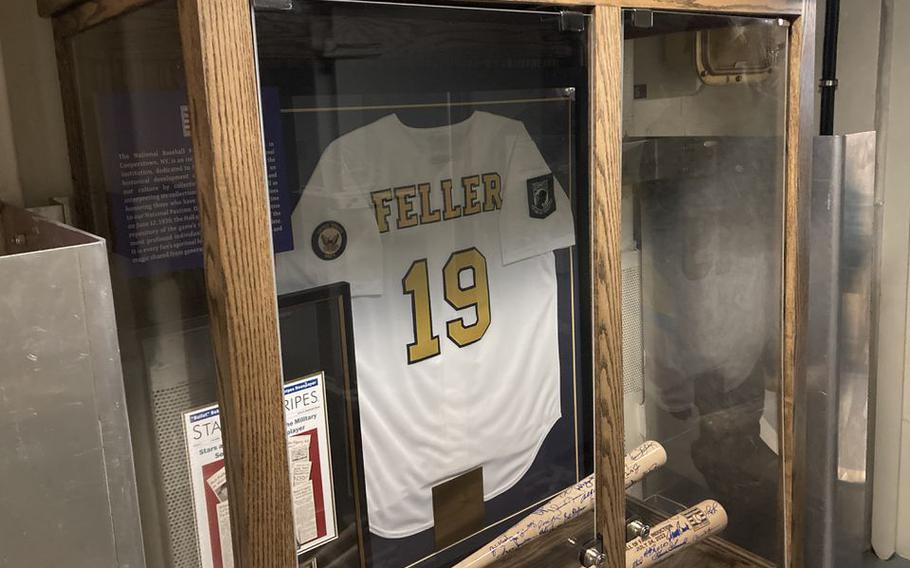 The newly christened USS Cooperstrown has a shrine to Cleveland Indians great Bob Feller, who served as a chief petty officer in the U.S. Navy. It includes a replica of the jersey he wore while playing for a Navy team. (Peter Krouse, Cleveland.com/TNS)

The plaques are found in the stateroom and berthing areas, Carnes said, although the plaque for Cleveland Indians great Bob Feller, who served as a Navy chief petty officer in the Pacific during World War II, is on the door of the chief petty officers’ mess.

Also on board is a shrine to Feller’s days playing for a Navy team called the Great Lakes Captains.

During the USS Cooperstown’s stay in Cleveland — Carnes declined to say exactly when the ship plans to shove off but that it won’t be around next week — the crew will have the chance to see the town. Some of sites on the agenda included Progressive Field, FirstEnergy Stadium and the Rock and Roll Hall of Fame.

Khiya Walker, 21, a third-class petty officer standing watch Thursday, said she will have time on Friday to go ashore and that she might go bowling or visit the Rock Hall, but that for sure she plans on hitting the Beachwood Mall.

“Just to shop around,” Walker said. 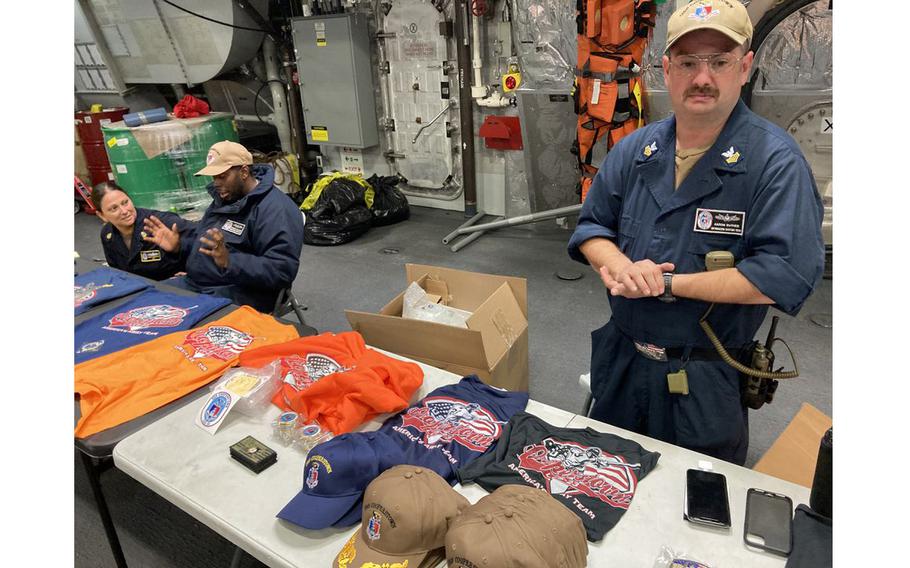 Those touring the USS Cooperstown docked at the Port of Cleveland could purchase a souvenir of their visit. (Peter Krouse, Cleveland.com/TNS)

Meanwhile, the ship has been providing privately arranged tours to locals and selling T-shirts, hats and other souveniers in the hangar where helicopters might otherwise be parked if the ship was on a mission.

Among the many locals who have taken notice of the nautical attraction is Cuyahoga Common Pleas Judge David Matia. He hasn’t toured the ship, and he managed to snap a photo of its arrival from his chambers on the 17th floor of the Cuyahoga County Justice Center.

“The view from chambers here can be pretty spectacular at times,” said Matia, who days earlier had taken a similar picture of a sizeable cruise ship entering port that he dubbed the “Love Boat.”

“This week in contrast to the Love Boat we have the warship,” he said. “Cleveland’s got it all.”