‘Fix our washers and dryers’: Marines and sailors struggle to clean their uniforms at base in Japan 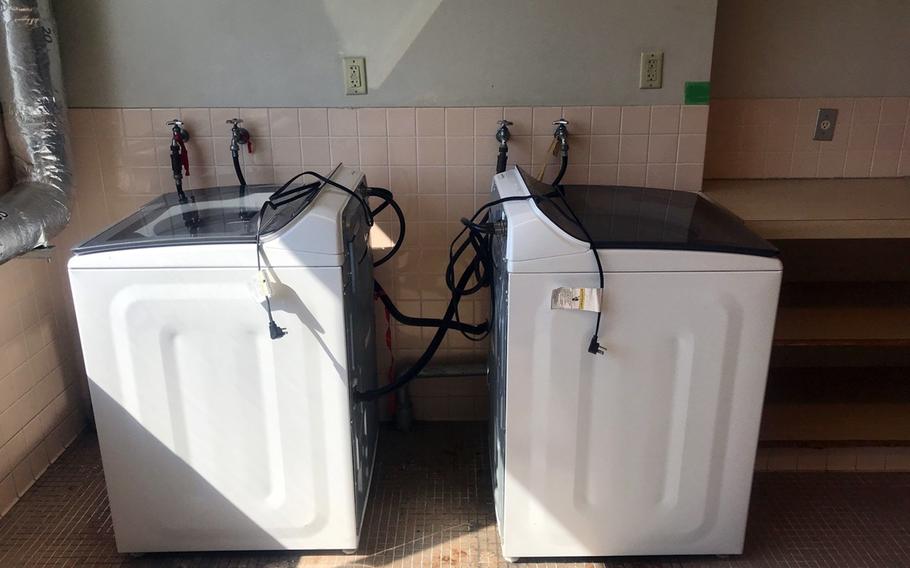 About 16% of the barracks washers and dryers, or 183 machines, are out of service at Marine Corps Air Station Iwakuni, Japan. (Jonathan Snyder/Stars and Stripes)

MARINE CORPS AIR STATION IWAKUNI, Japan – Many Marines and sailors living in the barracks at this base south of Hiroshima are having difficulty getting access to a working washer and dryer to clean their uniforms.

About 16% of the barracks washers and dryers, or 183 machines, are out of service at MCAS Iwakuni, a base spokesman told Stars and Stripes on Tuesday.

In one barrack hallway hangs a complaint printed on a sheet of paper: “Fix our washers and dryers!!!”

“The welfare of the Marines and sailors in bachelor housing are important to MCAS Iwakuni,” Maj. Gerard Farao said by email. “Facilities is aware of the problem.”

Unfortunately, the consumer-grade washers and dryers installed in the barracks cannot hack the commercial-grade load, according to Farao. But a fix is in the works.

“The replacement machines used in the barracks are typical household type washers and dryers that could not sustain constant commercial-grade use,” he said. “Bachelor Housing has now been purchasing industrial washer and dryers that are more durable to handle commercial grade use.” 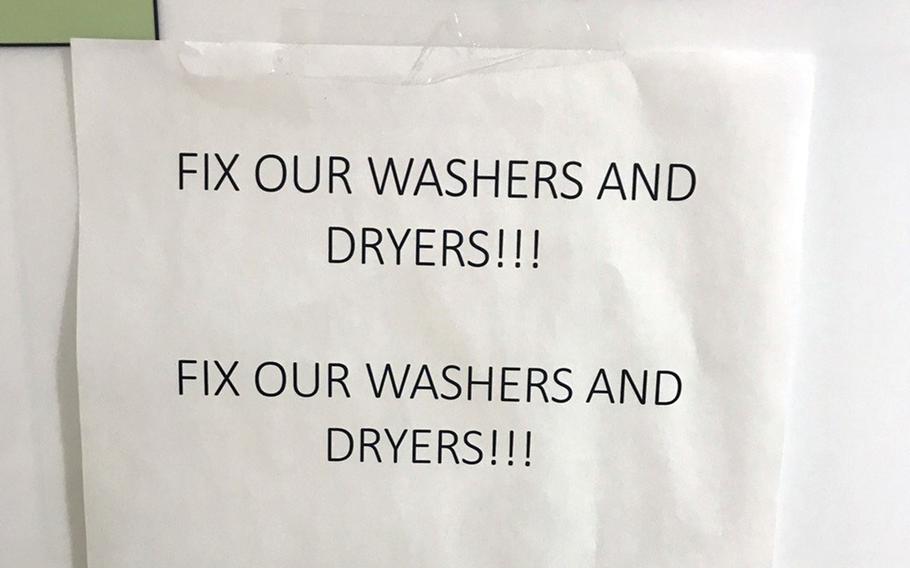 About 16% of the barracks washers and dryers, or 183 machines, are out of service at Marine Corps Air Station Iwakuni, Japan. (Jonathan Snyder/Stars and Stripes)

Farao said the base plans to stockpile new washers and dryers this fiscal year until a new repair contract takes effect. He provided no timeline for replacing all the faulty machines but said: “We’re working to ensure that every barracks has fully functioning washers and dryers to meet their needs.”

“My floor has probably 30 rooms and all the washing machines on my floor don’t work and I have to go upstairs to do my laundry,” barracks resident Lance Cpl. Tyler Leonard, 19, of Middlebury, Conn., told Stars and Stripes on Oct. 18.

The barracks vary in layout and design based on rank with as many as 60 individuals — ranks as high as E-5 — sharing a laundry room. Housing for senior enlisted personnel has one washer and dryer per room.

“(T)here are so few washers and dryers and they are always crowded all the time and the only option a lot of us have is to wait until it’s super late at night to actually get our clothes in the washer,” Leonard said. “Because, at least in my barracks, there are maybe six washers and dryers that actually work.”

A maintenance logbook at one barrack indicated a washer has been out of service since April.

“Previously there was not an established repairman on the air station,” Farao said. “This year, U.S. Navy Seabees were shifted over from the facility maintenance branch to conduct repairs on the washers and dryers.”

The base plans to hire someone to repair and maintain the machines.

“A contract is being drafted to have broken washers and dryers repaired by an outside contractor, within 72-hours after being reported,” Farao said.