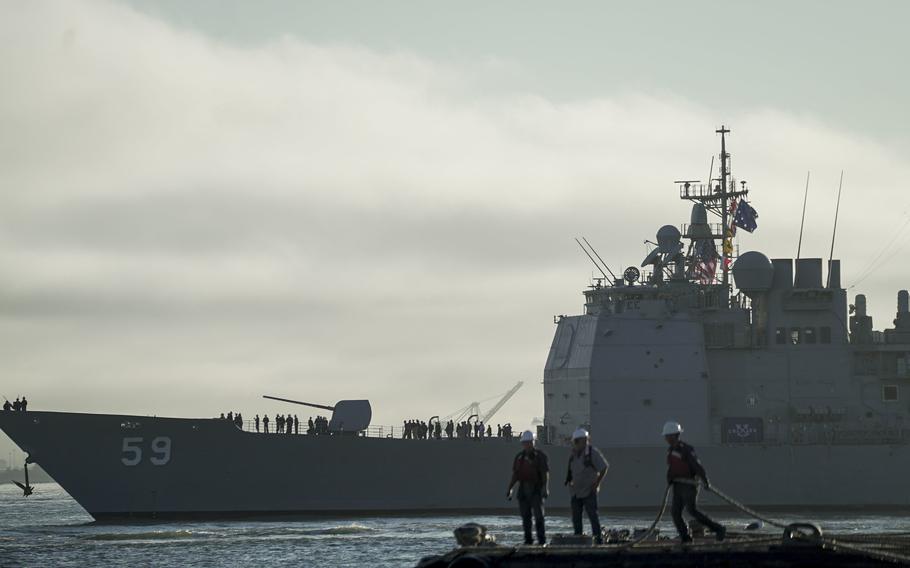 (Tribune News Service) — Suited up in an olive green pilot jumpsuit, 9-year-old Emma Wood could hardly contain her excitement as she waited to tour the USS Princeton, docked at Pier 30 in San Francisco.

She’s seen the action film “Top Gun: Maverick” six times since it was released earlier this year. And it’s inspired her to become a fighter pilot someday.

“I kind of like all of the action,” she said.

Wood, from Benicia, was one of an estimated 5,000 people who toured the 567-foot guided-missile cruiser Saturday during San Francisco’s Fleet Week. Since 1981, the annual event has brought visiting military ships as well as air shows featuring the Blue Angels flight demonstration team, whose supersonic roar envelops the city each October.

Thousands of visitors from around the Bay Area and beyond flock to the Embarcadero and Marina Green at the edge of the San Francisco Bay to take in the festivities. The event, which also hosts community workshops and humanitarian assistance training sessions for service members and civilians, has become a model for Fleet Weeks across the country. 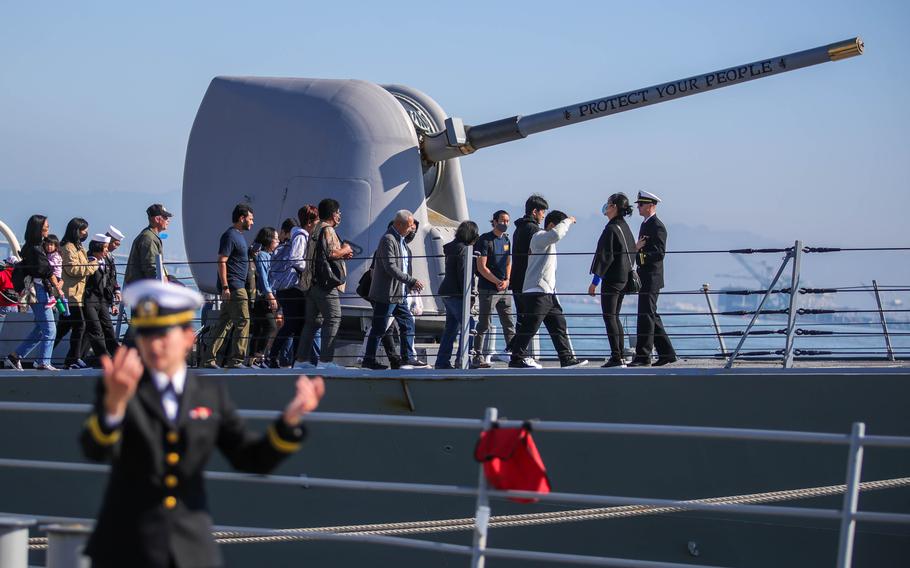 Aboard the USS Princeton, Chief Petty Officer Brian Pelham, the anti-ship missile defense coordinator for the vessel, said his crew trained local firefighters on watercraft rescue techniques during the visit. The ship, based out of San Diego, may take part in other Fleet Week events in Long Beach or Los Angeles later this year.

“We get to bring people on board and show them really what the taxpayer money really buys and what it means for us to have everybody onboard,” Pelham said. “And then it even has the other part of it, too, of us being able to visit some of these beautiful cities.”

Amanda Mavenyengwa, whose sister is currently serving in the Navy in Washington D.C., said she hoped touring the Princeton, armed with Tomahawk cruise missiles and two SH-60 Seahawk helicopters, would give her a better idea of her sister’s life in the military.

Vijayakumar Thangamariappan said he and his family came to Fleet Week six years ago when they first traveled to San Francisco. They now live in Campbell and have it made a tradition to attend the event every October.

Thangamariappan’s son, Aadhavan, was excited to look out at the bay from the deck of the Princeton and watch the Blue Angels airshow. The family planned to enjoy the autumn San Francisco weather walking along the Embarcadero and then maybe do some shopping.

“We want to make sure that every year we’ll be here,” Thangamariappan said.