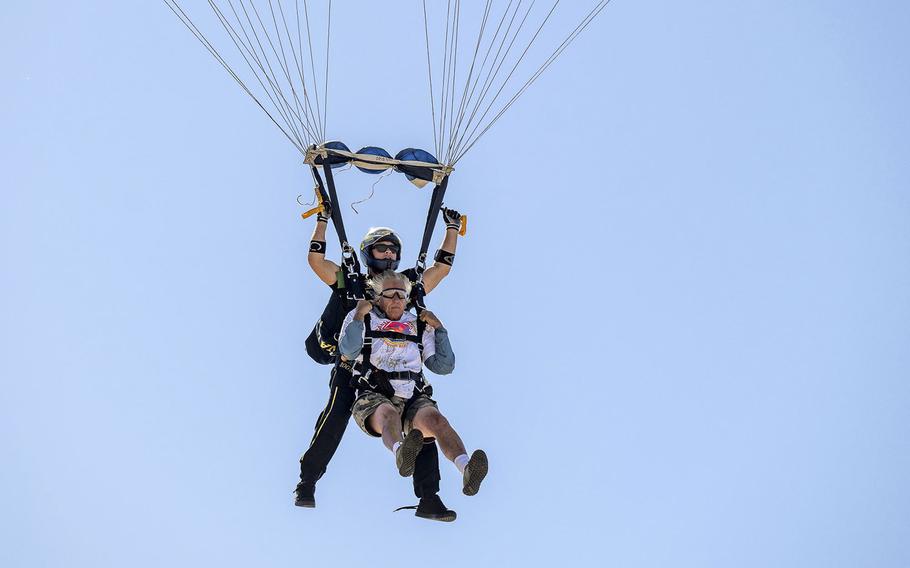 Navy Leap Frog member Nick Ray and surfer Don Ramsey float to earth after jumping out of a Navy Leap Frogs airplane as part of the lead up for this year’s Pacific Airshow in Huntington Beach, Calif. The airshow runs from Sept. 29 to Oct. 2. (Jeff Gritchen, Orange County Register/SCNG)

Ramsey was recently given the chance to skydive with the Navy Leap Frogs during preparations leading up to the Pacific Airshow that roars into Huntington Beach for three days of thrills in the air starting on Friday, Sept. 30. It is the sixth year Surf City is hosting the mega event.

Ramsey was selected by event organizers as a “Hometown Hero” – the veteran and surfer is well known around town and is also the organizer of the Kowabunga Van Klan of Huntington Beach and a musician who plays gigs at the Pier Plaza and elsewhere with his band the Ramsey Brothers.

Ramsey lived in Manhattan Beach before moving to Huntington Beach in 1963 when his father got a job with Douglas Aircraft. He graduated from Marina High and, like others, never left because he loved the town and its world-class surf.

Ramsey was a medic in the Army during the Vietnam War and also worked in a burn ward in South Korea for 14 months, so it was an honor to do the jump with fellow military brothers, he said.

Last year, Ramsey was asked if he wanted to fly in an F-15 aircraft, to which he responded: “Heck yeah!” But when he divulged his age, they said it was a no-go.

Though he is now 70, Ramsey was given the greenlight this year to jump out of the plane with the Frogs.

Ramsey admitted he had trouble sleeping as excitement raced through his head in the nights leading up to the jump.

“Oh man, I’m so stoked,” he said prior to the plunge. “I have no fear whatsoever.”

He knew he was in good hands.

The Leap Frogs, the Navy’s official skydiving and parachute team, have been around since 1969 and perform gravity-defying demonstrations across the country.

While the Leap Frogs are considered a performance group, each member has already served for years doing special operations work and the team is made up of active-duty Navy SEALs, Special Warfare Combatant-craft Crewmen, divers, explosive ordnance disposal technicians and others.

They are scheduled to jump all three days of the show.

Ramsey said the Pacific Airshow is one of the best events the town has to offer. Personally, he’s drawn to the patriotism on display through the three-day event.

“I love the get-together of all the people, we put everything aside and we become one patriotic, loving, American town that is grateful we have something like this to showcase who we are,” he said. “The airshow, in my opinion, is our biggest event.”

Attendance-wise, it’s considered the largest airshow in the country, with millions who watch the line up of aircraft from the shore. About 30 performances, including military and civilian, are scheduled for each of the three days.

Ramsey’s jump was just a taste of what’s to come for the airshow.

He recounted how the plane circled above the ocean, where he surfs regularly, first at 1,200 feet before rising to about 13,000 feet.

Then, it was time to take the leap. His favorite part was the free fall for about 45 seconds, plunging toward the ocean below.

“The way we were falling was just perfect,” he said. “We were right over the water, we kind of cruised over, we rode the shoreline for a while. It’s so far up there, over two miles in the air when you jump.”

He never shut his eyes, he said, wanting to soak in the entire sight of the sea and shoreline.