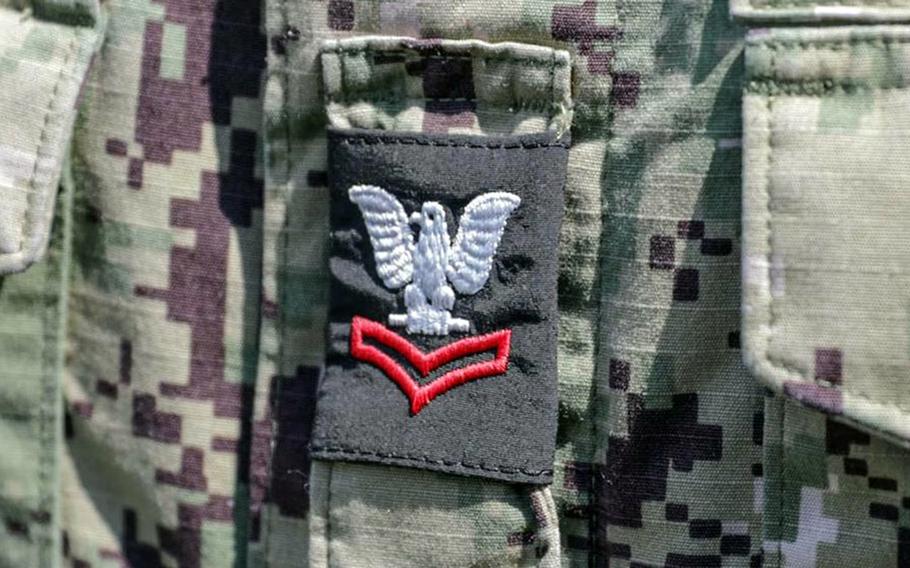 Some sailors are concerned that rank tabs will be in short supply as the Oct. 1 deadline approaches for wearing the insignia on their uniforms.

The black rank insignia, normally associated with the Navy parka, became an optional uniform item in October 2020 as easier to recognize on the Navy camouflage working uniforms, according to a Navy administrative change.

But the Navy on May 27 made the rank tabs mandatory on all working uniforms. The one exception is for sailors in tactical training and operations who are not required to wear rank tabs, at their commander’s discretion.

Sailors poured out their concerns about a shortage of the black insignia tabs after MyNavy human resources posted the deadline reminder on its official Facebook page on Friday.

“Attention Shipmates,” the post states. “Here’s your uniform reminder: Starting October 1, 2022, wear of the black cold weather parka rank insignia on all uniform components with rank tabs will be mandated. Follow the link for all the details!”

More than 1,200 comments followed the MyNavy post, many of them expressing skepticism that supplies would conform to the deadline.

“How can we get them if they are sold out everywhere and backlogged,” wrote Petty Officer 3rd Class Luke Oberle, of Naval Air Station Jacksonville, Fla., in response.

In an email to Stars and Stripes on Monday, Oberle said he tried to buy the tab from his local exchange website and discovered it backlogged by orders by about five months.

The Navy Exchange Service Command in Virginia Beach, Va., is making plans to replenish its stock of rank tabs, a spokeswoman said.

“We recognize that stock levels at some Navy Exchange Uniform Shops may look sparse as locations are selling out in as little as 24 hours after being restocked,” exchange spokeswoman Kristine Sturkie told Stars and Stripes by email Tuesday. “The Navy Exchange Service Command team is aware and continues to track minute by minute stock levels, while updating replenishment schedules based on that data.”

“The Navy Exchange Service Command uniform team continues to track minute by minute stock levels, while updating replenishment schedules based on that data,” she wrote. “Stores will continue to receive multiple weekly shipments to sustain the sale of nearly 20,000 rank tabs each week.”