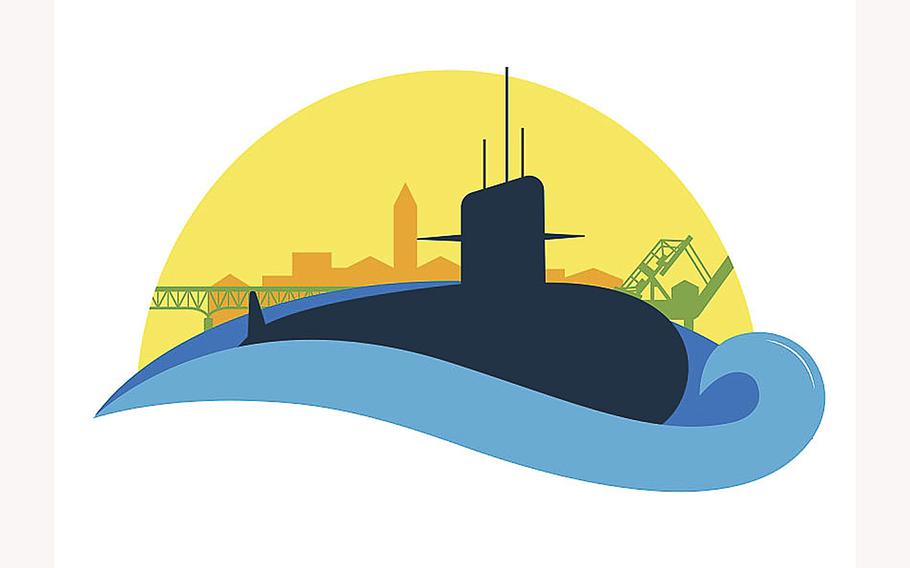 The future USS Groton Sail Monument will include the sail and rudder of the USS Groton. (Town of Groton/Facebook)

GROTON, Conn (Tribune News Service) — The future USS Groton Sail Monument will celebrate the contributions of all the men and women who design, build, operate and maintain submarines, and the families and communities who support them, said Retired Rear Adm. John Padgett, the chairman of the USS Groton Sail Foundation.

Although the monument will feature the sail and rudder of the USS Groton and be located in Groton, the submarine capital of the world, it is really a tribute to all involved in submarines, in shipyards from Hawaii to Maine, he said.

Padgett stood Monday afternoon at the future site of the monument, adjacent to the Groton Public Library in the grassy area along Route 117, before about 30 community members, local officials, and representatives of the Navy, during a ceremony to publicly unveil the site and formally mark the start of the project.

The monument, proposed as an earthen berm in the design of a submarine, will feature the sail and rudder of the USS Groton. There will be plaques and memorabilia along the monument's stone pathway.

Capt. Kenneth Curtin, commanding officer of the Naval Submarine Base, noted the historic ship Nautilus, which recently reopened after a nine-month maintenance period, tells the world the story of the submarine force, a story that begins in Groton, and the future Groton Sail monument will complement that story.

"It will honor the remarkable men and women who design, build, operate and maintain our submarines, along with the families and citizens of the community who support them," Curtin said.

Padgett said the idea for the memorial first came about when the the USS Groton was decommissioned in the late 1990s. Commissioning commanding officer, the late Bill Vogel, and retired vice admiral George Emery, who was also a commanding officer, struck up a conversation about how nice it would be if they could get the Groton sail and rudder back to Groton and set up a memorial. Vogel later started a foundation to pursue the idea of establishing the memorial to honor the designers, welders, operators and maintainers, and their families and the communities that support them.

In February of 2021, the Groton Sail Foundation presented the town with a check for $91,500 to cover the cost of purchasing a right-of-way from the state. The foundation will begin a fundraising campaign, with a $2.5 million goal, for the cost of the project.

Electric Boat has pledged pro-bono work and a local company, LBI in Groton, also pledged pro-bono work and for their building to be the location of restoration work. The submarine base has agreed to transport the sail and rudder from the base, where they are currently located, Padgett said. The expected timeline is for site preparation to begin in the spring, with the goal of holding a monument dedication sometime a year from this winter.

He noted that the committee worked very hard to get this done and looked at several sites and called it a "long time coming."

Town Mayor Juan Melendez, Jr. said he thinks the monument's home in Groton is more appropriate than any other place in the world.

"We're the submarine capital of the world, and I think, with this project, along with our sign on I-95, signal to the world that this is the place where we train submariners, where we build submarines, and this project is going to be here to celebrate that," he said.

Melendez, Jr. told the story of his father, his personal hero. His father joined the Navy in 1984, which brought him from the Bronx, N.Y., to Groton. He became chief in 1998 and in 2001 went on a seven-month deployment after the 9/11 attacks. He retired as chief petty officer in 2006 and now works at Electric Boat, where he's helping to build the Columbia-class submarine.

Melendez, Jr. said his father is an extraordinary person who did extraordinary things, but in Groton, many people have stories like his. The monument will be a place to tell the stories of and celebrate the people who served aboard ships and sacrificed for the country.

"When our government goes in to negotiate, peace hopefully, a lot of that has to do with the submarines that are underwater, with the men and women that serve on them, and definitely with this community," he said.

De la Cruz, whose grandfather served in the Navy and then worked in Groton, said the Groton community is unique because it supports people who land here from other places, whether they're looking for doctors or for what is the best school.

"That's part of our community and this is a memorial that's recognizing all of us," he said.

State Rep. Christine Conley, D-Groton, spoke about how legislators, who got up early for the public hearing on the land transfer before another 14-hour day discussing bills, are excited about how beautiful the monument will be and how everyone's going to be able to come and see the great work people who build and serve on submarines do.

"We're one step further, and I can't wait to see the finished project," Conley said. "Good work, everyone."

State Sen. Heather Somers, R-Groton, recounted a story of how she recently was at an event with volunteers from the submarine base. She spoke with a young woman who initially didn't like Groton, but said she now is starting to become part of the community and loves it here and wanted to stay in Groton for the next four years. Somers and the young woman spoke about how suitable it was to have a monument for the military community to show how awesome it is and that it is the submarine capital of the world.

Visit The Day at www.theday.com