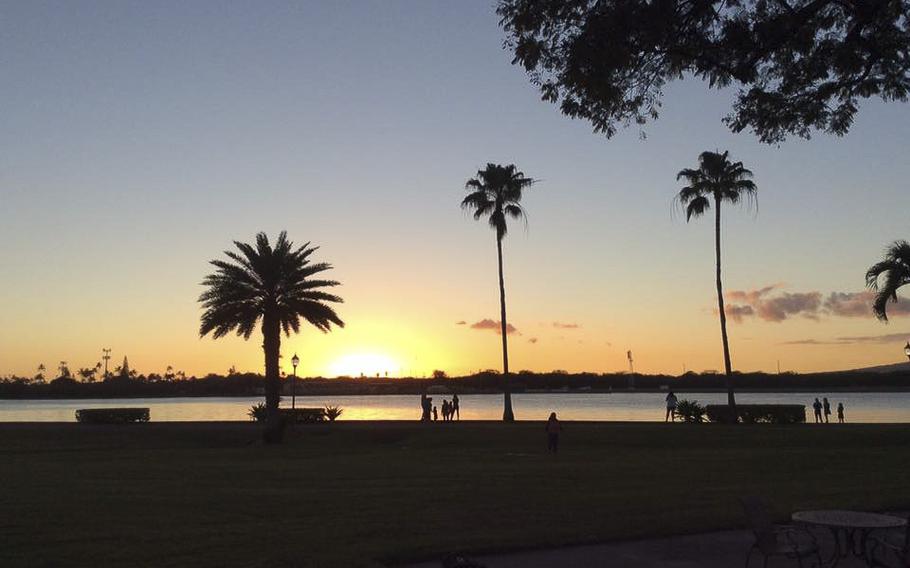 The sun sets as seen from the Hickam Air Force Base Officers Club in January 2017. (Facebook)

(Tribune News Service) — The state Department of Health is awaiting the results of new water samples taken at the Historic Hickam Officers’ Club before giving the Navy clearance to reopen the facility nine months after water samples detected levels of methylene chloride, a probable carcinogen, that were as high as 37 times the safe limit.

The samples were taken by the Navy in January as part of comprehensive testing of the Navy’s Joint Base Pearl Harbor-Hickam drinking water system, which was contaminated in November with jet fuel from its Red Hill fuel facility. The DOH says there is no indication that the Red Hill facility is the source of the methylene chloride contamination and that it’s unlikely that it posed a safety hazard to the public.

DOH said the faucet may have been used to clean tools used for minor repairs and painting at the facility and that products containing the chemical, such as those used for paint removal or degreasing, may have splashed on the faucet, resulting in the detections. The faucet had also been used to fill mop buckets, according to the Navy.

Still, the DOH ordered the Navy to close the club’s restrooms, ensure that no water from the facility could travel back into the water distribution system, come up with a work plan for locating and removing the source of the contamination, develop a health and safety plan for workers that includes how to safely handle methylene chloride, and reopen the facility only after DOH approval.

Exposure to high levels of the chemical, through the air, skin or by ingesting it, can cause nausea and vomiting, skin burns and liver damage.

The methylene chloride detections were among just a handful of samples that detected contaminants above safe limits out of thousands that were taken following the Navy’s flushing of its water distribution system.

The Hickam Officers’ Club, on Hickam Air Force Base, was closed at the time that the samples were collected and remains so as it awaits renovations. However, a lanai still hosts social events. The restrooms were the only source of potential exposure to the public, according to Navy documents.

The DOH says that there was no legal requirement to notify the public about the high levels of methylene chloride that were detected because they were in a faucet, not the broader water distribution system. The Navy flagged the methylene chloride detections in its annual water quality report, and signs have remained on the restroom doors for months warning the public that the water is being flushed and tested.

A Navy spokesman said the outdoor faucet has been removed and that water samples taken at other locations in the building did not detect the chemical.

“The affected plumbing has been removed and follow-on flushing and sampling of the building occurred last week and the results of that testing are pending, “ said Navy spokesman Mike Andrews by email. He said that the water in the building has not been used for drinking or food preparation.

Andrews said that the Navy concluded that the contamination was “an isolated plumbing issue.”