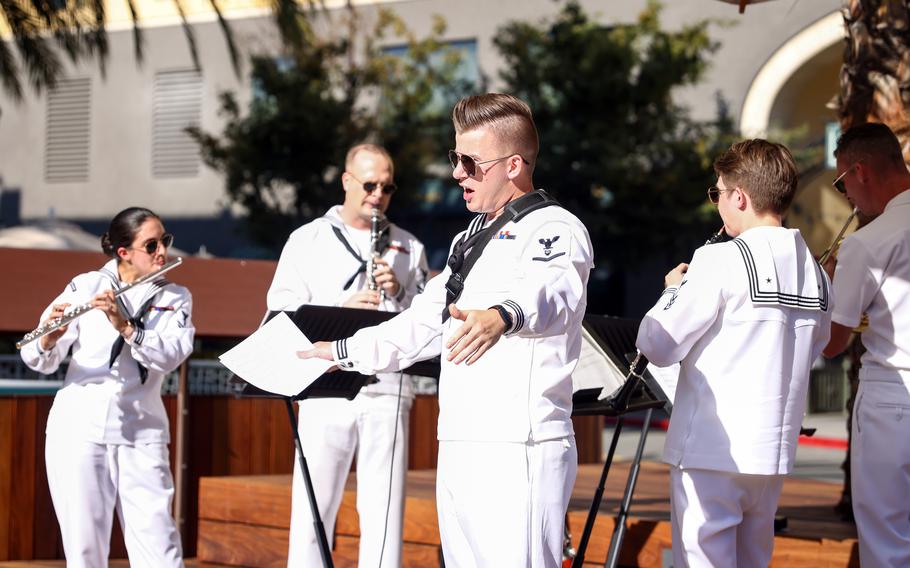 SAN JOSE, Calif. (Tribune News Service) — Don’t be surprised if you see quite a few uniforms around San Jose over the next few days as Navy Week has come to the city for the first time.

The Navy Band Southwest Woodwind Quintet publicly kicked things off by performing for shoppers and diners at Santana Row on Monday night in their summer whites. But earlier in the day, another contingent of naval personnel — sans instruments — volunteered at Second Harvest Food Bank.

More than 75 sailors, led by Rear Adm. Anne Swap, will be part of events throughout the city and elsewhere in the Bay Area. They’ll help Turning Wheels for Kids with bike repairs, work at a Habitat for Humanity build site and volunteer at the Habitat ReStore in San Jose and participate in after-school programs at elementary schools and the Boys and Girls Clubs of San Jose. The band will make the rounds with performances at a San Jose Giants game, the YMCA in Gilroy and both days of the Italian Family Festa this weekend at History Park in San Jose.

Adm. Swap, the director for the National Capital Region Market of the Defense Health Agency, is a native of Ft. Ord and said she’s excited to return to California to share the Navy’s story.

“The Navy looks for ways to innovate: strategically, technologically, and for our Navy Team, I can think of no better place to conduct innovation discussions than San Jose,” she said in a statement.

Navy Week started in 2005 as a community outreach program at cities that don’t have a significant Navy presence, such as Houston, Albuquerque and Memphis. While the Bay Area as a region had strong ties to the Navy — and San Francisco still hosts Fleet Week celebrations in October — San Jose had largely been left out. It’s true that we do have a connection to the bay at the Alviso Marina, but it’s been a while since anything much larger than a kayak has made port there.

You can check out the Navy Week schedule of events at outreach.navy.mil/Navy-Weeks-2022/San-Jose-2022.