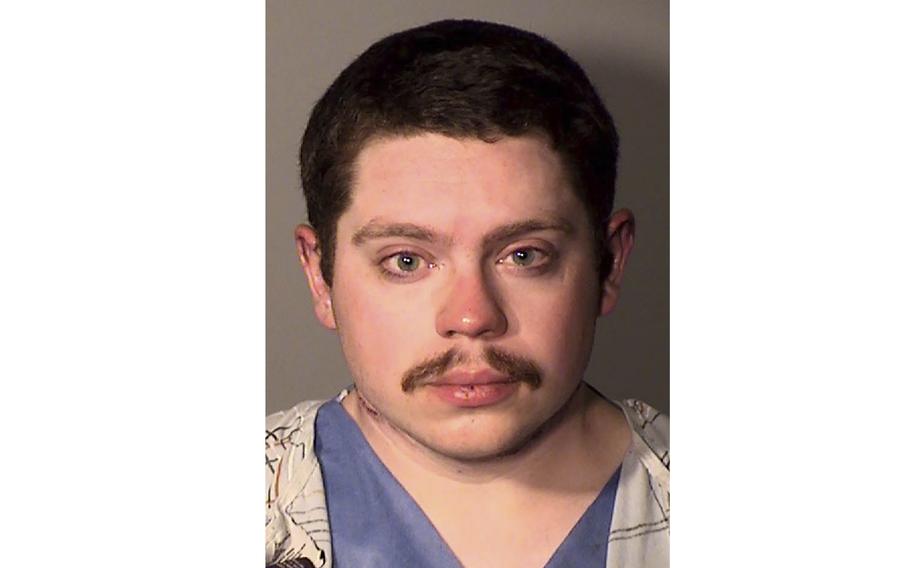 This photo, provided by the New London, Conn., Police Department, shows George Bryan Dodson II. Dodson, a 23-year-old submariner, who waived his right to a probable cause hearing on Monday, Aug. 15, 2022, pleaded not guilty to charges including murder, attempted murder, arson and cruelty to animals in connection with the July 20, 2022, death of his wife, 23-year-old Shelby Dodson. (New London (Connecticut) Police Department)

(Tribune News Service) — George Bryan Dodson II, the 23-year-old Navy technician charged with killing his wife and setting their New London, Conn., home on fire in an alleged attempt to kill their son, appeared in court Monday morning and entered a plea of not guilty.

Dodson is charged with murder, attempted murder, arson and cruelty to animals after allegedly setting fires throughout his family’s Sherman Street home on July 20 after killing his 23-year-old wife Shelby Dodson using a hammer, according to the New London Police Department.

Dodson appeared in New London Superior Court Part A, where major crimes are heard, before Judge Hilary Strackbein about 11 a.m. He was brought in from the Department of Correction wearing a bright orange jumpsuit, a maroon face mask and glasses.

Judge Strackbein waived Dodson’s probable cause hearing at the request of his attorney, Mike Miller, and Dodson pleaded not guilty to the alleged crimes.

On July 20, New London police responded to reports of a fire at the couple’s home at about 10:30 p.m. They found Dodson kneeling in the grass covered in blood and soot, according to police.

Dodson remained quiet at first, police said, but allegedly confessed to the crimes when a first responder asked him what happened.

“I did this, I killed her,” he said, according to the police reports.

He then told police that his wife, their 13-month-old son and their dog were inside the blazing house.

Dodson allegedly told police that he killed his wife because they were in an open relationship and he had become jealous, and allegedly said he set the fires to try to kill their baby “rather than having to use the hammer or the knife.”

According to the United States Navy, the Dodsons were relocated to the New London area about three years ago. Dodson, an electronics technician who has been in the Navy since 2017, was stationed on the USS Newport News, which is home-ported at the Naval Submarine Base in Groton, since June 2019. Prior to his station in Groton, he was stationed in Norfolk, Va.

On the night of the murder, police found Shelby Dodson on a floor inside the house. She was rushed to a hospital where she died. A hammer was found on a kitchen counter near the sink, according to police.

Investigators found that multiple fires had been intentionally set throughout the house, one on the couch in the living room, one on a chair in an upstairs bedroom and one at the center of the bed in another upstairs bedroom, police said. Dodson confessed that he started the fires, records show.

The couple’s baby boy was found “conscious but lethargic” and was taken to Lawrence + Memorial Hospital in New London, then Yale New Haven Hospital.

Shelby Dodson’s sister, Sylvonna White, created a GoFundMe to help with the finances of moving the baby boy, her nephew, to her home in Tennessee. She wrote on the fundraising site that the baby’s name is Everett and that his “physical health is okay” following the fire.

In a social media post, she wrote a tribute to her sister and said she was working to gain custody of her nephew to bring him closer to their family down south.

“My beautiful sister was the victim of domestic violence and lost her life,” she wrote. “She is gone forever, but she left behind a precious piece of her heart. I am working tirelessly to bring my sweet nephew, Everett, home to Connecticut to Tennessee to be with family.”

George Dodson is being held in lieu of a $3 million bond, according to court records, and is in custody at the MacDougall-Walker Correctional Institution in Suffield.

Miller said he met with Dodson and a social worker at the prison recently to discuss his client’s case.

Judge Strackbein said she wanted both parties to have time to review evidence in the case before their next court appearance.

Supervisory Assistant State’s Attorney Stephen M. Carney, who is prosecuting the case, gave Miller a small packet containing some of the prosecution’s discovery in Dodson’s case.

Dodson’s next court appearance is scheduled for Sept. 20 for an in-chambers discussion with his lawyer, the prosecutor and the judge.