‘You fight and you win, or you swim.’ USS Fort Lauderdale commissioned with reminders of global challenges 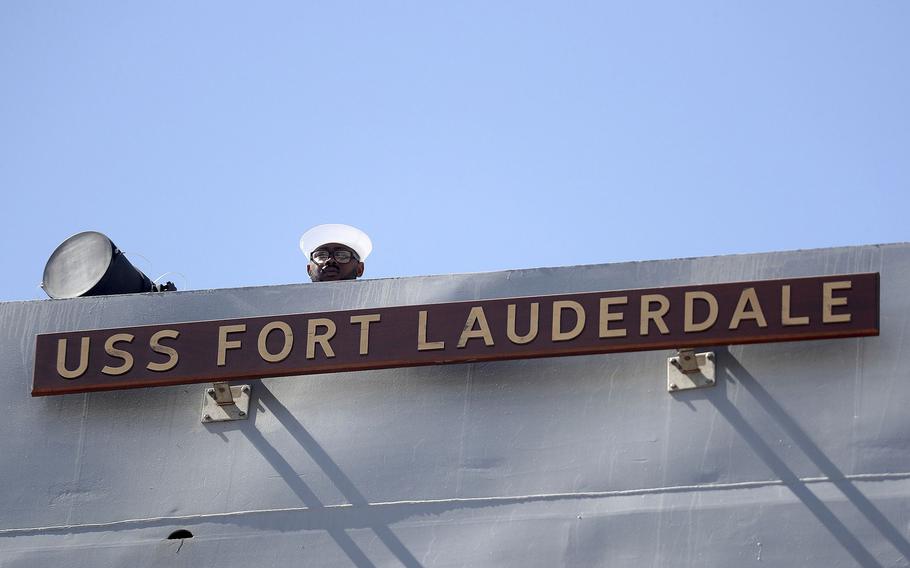 A Sailor stands at attention aboard the USS Fort Lauderdale (LPD 28), a San Antonio-class amphibious transport dock during the commissioning of the ship, on Saturday, July 30, 2022, at Port Everglades in Fort Lauderdale, Florida. (Mike Stocker/South Florida Sun-Sentinel/TNS)

(Tribune News Service) — As Capt. James Quaresimo spoke during Saturday’s commissioning of the USS Fort Lauderdale, a sense of readiness could be felt throughout the invitation-only, civilian-heavy crowd of about 4,000.

Regarding the importance of controlling the sea, Quaresimo, the ships’ commanding officer, noted there are no foxholes to crawl into, and no trenches.

At 684 feet long and 105 feet wide, the USS Fort Lauderdale was clearly the star of the show.

But Quaresimo’s presence was inspiring as well.

Standing in front of the mighty new warship at Port Everglades’ Terminal 4, Quaresimo looked toward the ship’s assembled personnel.

“We truly are getting the best of the best,” he said. “They are born in the eye of the hurricane and rocked in the cradle of waves. They’re bathed in saltwater and excellence. Oh, yes, King Neptune would be proud of these sailors and Marines.”

At one dramatic point in the ceremony the USS Fort Lauderdale hoisted its colors and its commission pennant.

After the hourlong commissioning ceremony, the sixth in the United States this year, the ship was officially entered into active service for the U.S. Navy.

“This is a warship,” Gen. Eric Smith said, “and that makes war less likely for us as Americans.”

Late in the ceremony, it was time to Bring the Ship to Life, a tradition that features hundreds of sailors and Marines running aboard the ship.

Its horn blew, sailors and Marines lined its deck, and the ship was officially ready to execute any order given by the United States.

The San Antonio-class warship, in Port Everglades since Monday, is capable of carrying 350 sailors, 650 Marines, and an intimidating collection of expensive military attack vehicles. 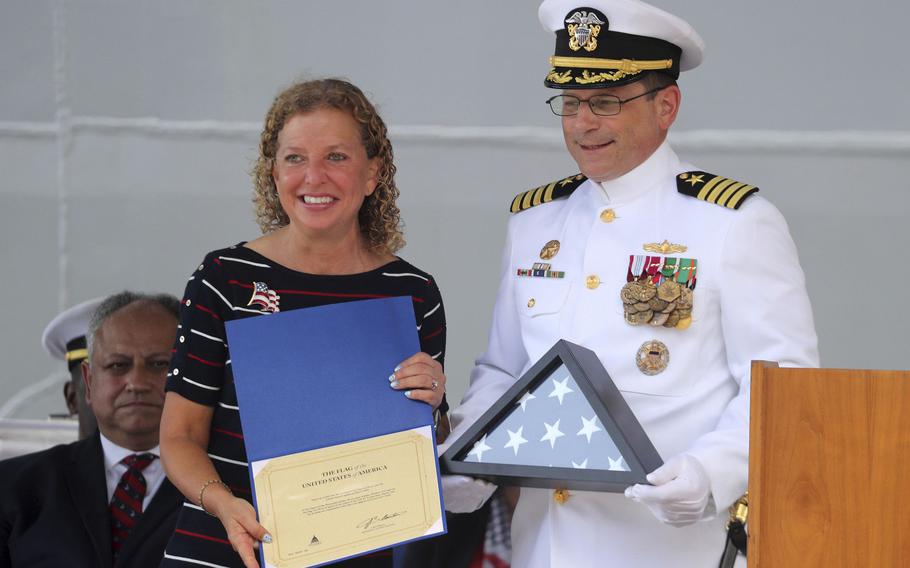 U.S. Rep. Debbie Wasserman Schultz, D-Fla., left, presents a flag that flew over the U.S. capital to Capt. James Quaresimo, the commanding officer of the USS Fort Lauderdale (LPD 28), gives a speech during the commissioning of the ship, on Saturday, July 30, 2022, at Port Everglades in Fort Lauderdale, Florida. (Mike Stocker/South Florida Sun Sentinel/TNS)

It should be in action for at least 40 years, and it’s a source of pride for the U.S. Navy and Fort Lauderdale.

Quaresimo spoke in a controlled but assertive tone and reminded the audience that Russia and China are challenging the United States across the globe.

“But rest assured we will not allow those challenges to go unchecked,” he said. “For we in the surface forces are in the business of being prepared to fight and win at sea.”

He also warned, “The USS Fort Lauderdale stands ready to deliver Naval power to any place, on any day, at any time!”

And, in closing, he issued ominous words.

“And those that may wish to challenge us, they should pause. We are equipped with America’s unstoppable secret weapon that our enemies will never be able to duplicate, and that is the fierce, dedicated, unstoppable men and women of the United States Navy and Marine Corps!”