‘We’re in the future:’ Austal USA gets started on its first steel ship for the Navy 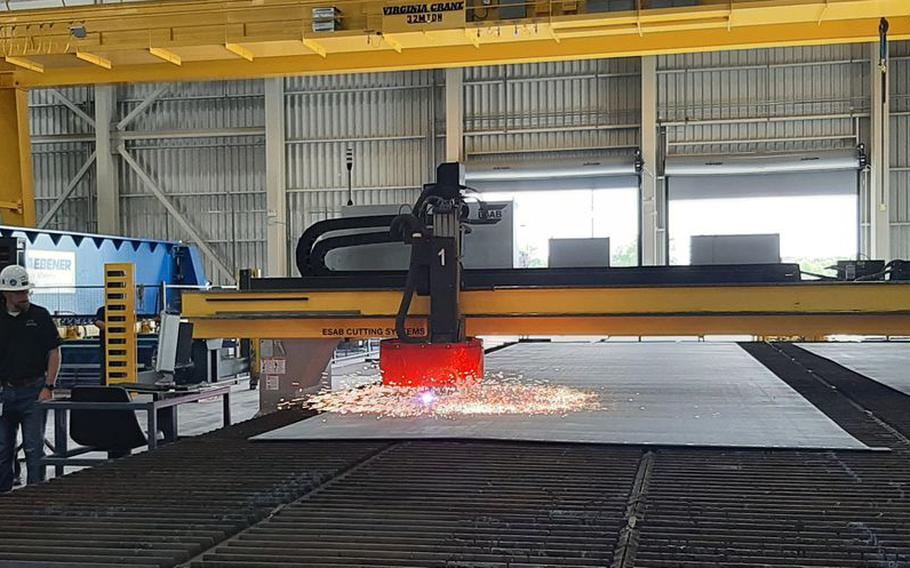 A plasma cutter at Austal USA makes the "first cut" in plating that will become part of the Mobile shipyard's first steel ship, a Navajo-class towing, salvage and rescue ship built for the U.S. Navy. (Lawrence Specker, al.com/TNS)

(Tribune News Service) — With the push of a button Monday morning, a plasma cutter flared to life and began slicing a steel plate, making the first cut on materials that will become Austal USA’s first steel ship.

“Many of you have had the opportunity to join us for similar ceremonies before. But none were quite as special as today’s,” said Dave Growden, Austal USA’s VP of new construction. Growden said this particular occasion marked not only the start of work on a ship “but also the next chapter in Austal USA’s history.”

“We do this at a critical time for our Navy and our nation,” said Rear Adm. Thomas J. Anderson. “At a time when our peer competitors, and I’ll be specific, Russia and China, look to displace us on the global stage and ultimately change our way of life. When events unfolding in places like Ukraine and the South China Sea have provided true insight into what our peers’ aspirations are and how far they’re willing to go to achieve them.”

“This is a very important ship,” said Anderson.

The ship is question will be part of the Navajo class, a type of vessel designated as the T-ATS by the Navy. It’s a multipurpose vessel primarily intended for use in salvage, towing and rescue operations. Growden and Anderson said it also might be used in humanitarian relief, spill response and search and surveillance missions.

The first five are being built by a Louisiana shipyard. Austal has contracts to build two, with options that could extend the work to several more ships.

For the Navy, it’s a vessel that replaces older ocean tugs and salvage ships. For Austal, it’s a key stepping stone into long-term security. With the end of work approaching on the aluminum Littoral Combat Ship program, diversification into steel gave Austal much better chances of maintaining its work force.

Underscoring the stakes, Growden described the T-ATS as the “first new shipbuilding program in 13 years” for Austal USA.

“Tomorrow is a new day,” said U.S. Rep. Jerry Carl, who got to push the button to start the cutter. “Tomorrow we go after more ships.”

Austal hasn’t been waiting for that tomorrow: It already has a deal in hand to build a large floating dry dock for the Navy. More recently it received a contract to build Coast Guard Offshore Patrol Cutters (OPCs), a deal that could be worth billions if that service exercises all its options.

Austal USA President Rusty Murdaugh said Austal USA’s work force currently includes about 2,800 people, and he expects that to rise with the new steel programs. That will happen in a “phased approach,” he said. Engineers and designers will be needed first, with a general increase following as the T-ATS and other projects enter the manufacturing part of the process.

The first T-ATS and the dry dock give Austal a chance to build some experience on its new line before tackling the cutter program. “We’ll have plenty of volume that will go through the yard before the OPC comes through,” he said.

Other benefits follow from that, Murdaugh said. The high-tech equipment on the steel line provides much more data to the company, allowing it to operate more efficiently.

“This is a whole new era for shipbuilding,” he said. “We’re in the future.”