Blue Angels arrival in Annapolis delayed due to weather 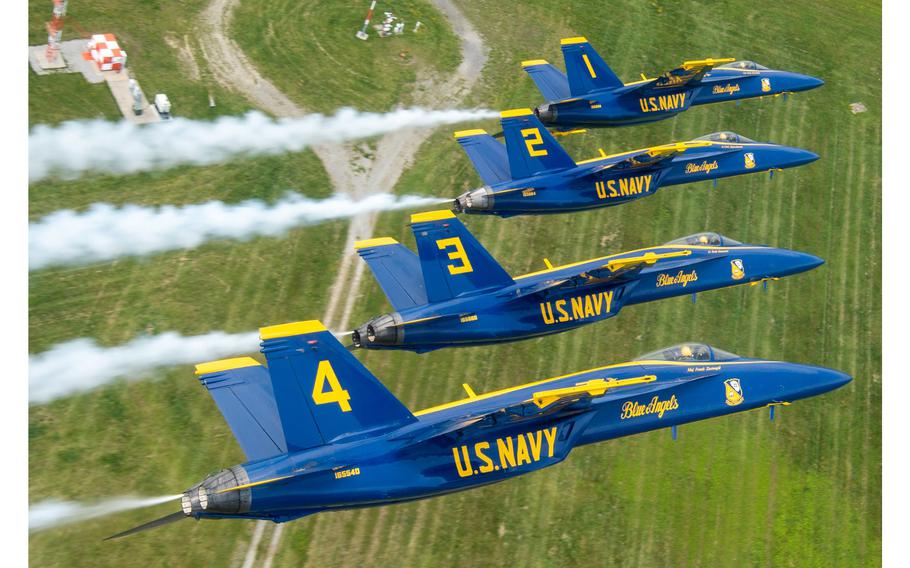 The Navy’s Blue Angels, shown here on May 21, 2022, at the Dover Air Show in Delaware, are scheduled to perform during Naval Academy Commissioning Week festivities. (U.S. Navy Blue Angels/Facebook)

ANNAPOLIS, Md. (Tribune News Service) — The Blue Angels were set to return to Annapolis on Tuesday with an initial flyover and rehearsal, but weather delayed their arrival, the Naval Academy announced. A full demonstration was slated for Wednesday afternoon, weather permitting.

“The Blue Angels circle & arrival scheduled for this morning has been POSTPONED for the time being. The team will be assessing visibility throughout the afternoon and will give clearance to proceed as soon as it’s safe,” the Naval Academy wrote in a social media post around 11:30 a.m.

Thousands of visitors are expected to descend on Annapolis this week as the Naval Academy holds Commissioning Week festivities, including the Herndon Climb on Monday and capped off with graduation and commissioning ceremonies and a speech by President Joe Biden on Friday. The Blue Angels will make one final flyover at 10:04 a.m. just as the ceremony is starting.

Wednesday’s forecast calls for more clouds with a 40% chance of rain throughout the day.

There will be some closures in Annapolis throughout the week because of the Blue Angels show.

The Naval Academy Bridge on Route 450 will be closed to all vehicle and pedestrian traffic during the shows. Visitors entering and leaving Annapolis should use Rowe Boulevard or other alternate routes during these times:

— Wednesday: Closed from 1:45 p.m. to 4 p.m. or conclusion of the flight demonstration.

— In the event of inclement weather Tuesday, the Naval Academy Bridge will also close from 10:45 a.m. until 1 p.m., Wednesday.

— The Severn River will also be closed to boating and other watercraft from the Naval Academy Bridge to Spa Creek. Call the U.S. Coast Guard at 410-576-2693 for further details.

There will also be water restrictions on Tuesday and Wednesday on the Severn River and its tributaries.

Anchoring or boating will not be allowed between 9:30 a.m. and 4 p.m. from north of the quick flashing light at the south end of the Naval Academy’s sea wall to Greenbury Point and south of a line marked by the Severn River bridge, according to the release.

Traffic is expected to be heavy with limited parking in the downtown area during the days leading up to commissioning. Visitors should head to www.AnnapolisParking.com to reserve garage parking at Gott’s Garage in advance.

There will be strict enforcement of metered parking, two-hour spaces, residential permit zones and red zones, the city said.

Visitors may also park at Knighton Garage at the corner of Colonial Avenue and West Street, and Park Place Garage, just off West Street and Spa Road, and take the free downtown shuttle.

On Friday, there will be no state employee parking at the Navy-Marine Corps Memorial Stadium lot. The parking lot will be reserved for graduation attendees. City and state employees who normally park there should relocate to the Calvert Street Garage.