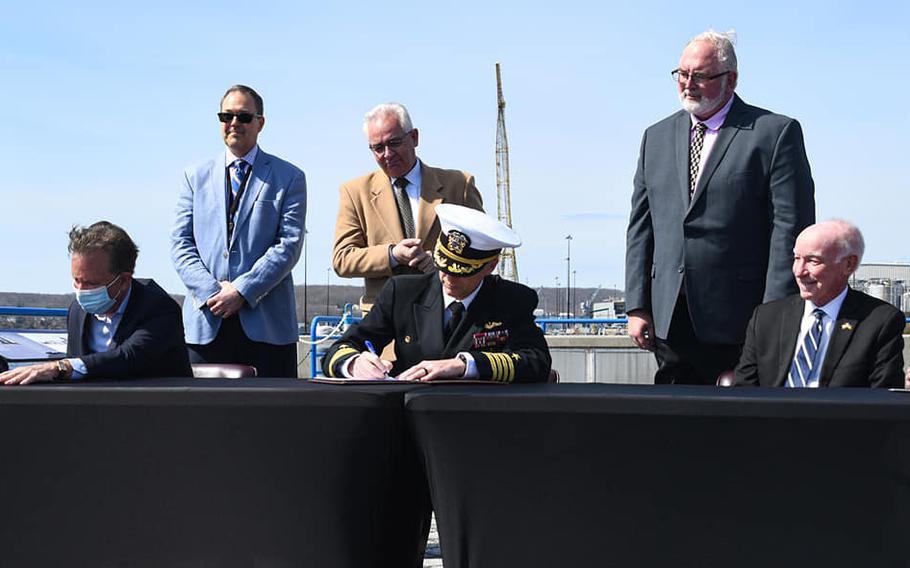 Naval Submarine Base New London on Wednesday announced partnerships with the Hartford, Conn.-based Capitol Region Council of Governments, Connecticut Department of Transportation and Groton Utilities, which will allow the base to share services and save money. (U.S. Navy)

GROTON, Conn. (Tribune News Service) — Naval Submarine Base New London on Wednesday announced partnerships with the Hartford, Conn.-based Capitol Region Council of Governments, Connecticut Department of Transportation and Groton Utilities, which will allow the base to share services and save money.

The base and CRCOG signed an Intergovernmental Support Agreement, known as IGSA, to complete three projects: perimeter fence and internal gate repairs, lead abatement services and bulk purchases of chlorine. Capt. Kenneth Curtin, commanding officer of the submarine base, said anticipated savings from these projects could be more than $150,000.

He and other officials at the ceremony — attended by U.S. Rep. Joe Courtney, D-2nd District, and Gov. Ned Lamont, on his first day out of isolation with COVID-19 — touted the benefits of IGSAs.

Congress in 2013 authorized military installations to enter into these public-public agreements with state and local governments, which can be simpler than going through the federal contracting process. Curtin noted that such agreements can also create new revenue streams in the community and keep jobs local.

"It's not often that state government is the low-cost alternative, but in this case, we're able to save some money, and I think that makes a difference," Lamont said.

Curtin and Mark Rolfe, deputy commissioner of DOT, also signed a letter of intent to enter into an IGSA, which Curtin said was for stormwater improvements where the base abuts Route 12. He said an agreement would mitigate flood risk and maintain environmental resilience, and that savings of $200,000 to $400,000 could be realized.

Lastly, Curtin announced a partnership with Groton Utilities to explore how the utility company could help the base maintain its water infrastructure. He said the base would seek Groton Utilities' assistance with tasks like providing water testing in military housing areas, and the hope is that Groton Utilities could also help with flushing and testing fire hydrants, upgrading water mains and providing emergency repairs.

Bob Ross, executive director of the Connecticut Office of Military Affairs, said he was thrilled about the announcement regarding three agreements at one time at three levels of government: local, regional and state. And he said it's about more than money.

Courtney talked about tough moments in the base's history, citing when it was targeted for closure through the Base Realignment and Closure process in 2005. He said the state must be a partner in protecting the future of the base, saying it's not enough to show up with protest signs during the BRAC process but that there must be preventative policy.

Courtney said of the announcements Wednesday, "This is the kind of collaboration and teamwork that I think is going to really make this state succeed and keep this base an enduring base for our country for years and years to come."