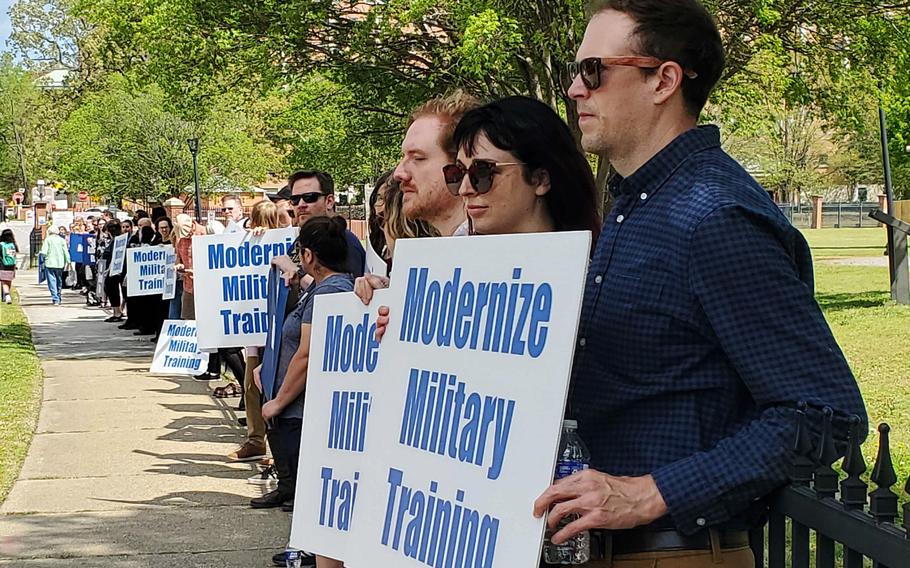 Nearly 50 people showed up Thursday, April 14, 2022, to protest against the use of live animals in medical training at the Naval Medical Center Portsmouth. (Ian Munro)

PORTSMOUTH, Va. (Tribune News Service) — Activists and veterans gathered Thursday outside the main gate of Naval Medical Center Portsmouth to protest training done there that results in the death of pigs.

Nearly 50 people gathered to protest the practice that is used to prepare medics for the field.

However, one Army veteran doctor who once trained on a live goat, said the method of using live animals as training tools is outdated and ineffective compared to modern simulations.

“When seconds count, and you want to have that muscle memory, the muscle memory is there with a simulator that is a person‚” not an animal, said Dr. Robert DeMuth, 52, of Des Moines, Iowa, and supporter of the Physicians Committee for Responsible Medicine.

Live tissue training involves sedating an animal and inflicting wounds that are then treated and then humanely putting down the animal before it wakes up, according to medical journal documents.

He traveled across the country to attend Thursday’s protest organized by PCRM in Portsmouth.

In 2003, DeMuth was caring for soldiers in Iraq during Operation Iraqi Freedom as a surgeon with the 2nd Armored Calvary Regiment.

He said that year, medics he trained with simulators earned awards for their care of victims of the Jordanian embassy bombing in Baghdad in which nearly 20 people died and 65 people were wounded, according to U.S. Department of State archive files.

The controlled labs where the live tissue training are done negate any real-world experience thought to be gained by the practice, according to DeMuth.

Field simulation in which machines that look and can be programmed to act like wounded soldiers more accurately capture the hectic and realistic aspects of caring for human combat wounded than a sterile laboratory working on a live non-human, DeMuth said.

In a simulation, there are many more opportunities to learn how to improve care for those wounded in combat.

“You don’t get any of that with the live tissue training,” he said.

Live tissue training has become more controversial over time as simulations have improved, according to medical journal documents. There are eight emergency medicine residency programs using live animals in the U.S. while the other 277 health facilities use only nonanimal methods, according to PCRM survey documents.

Facilities, including those in the military, have phased out or shrunk the practice, such as at Naval Medical Center Portsmouth.

Since 2015, live tissue training have been on the decline at Naval Medical Center Portsmouth — down roughly a third — due to improved simulation training, according to a statement provided by Christina Johnson, public affairs officer for the center.

The practice of using pigs is in compliance with U.S. Department of Defense policies and meant to provide effective and realistic practice so service members can provide appropriate care to those wounded in combat, according to the statement.

“The training program’s accreditation was renewed in February 2021 by American Association for Accreditation of Laboratory Animal Care International, and is consistent with the Institutional Animal Care and Use Committee guidelines,” the statement said.

Some members of the Thursday protest in Portsmouth were military, while others were supporters or staff of People for the Ethical Treatment of Animals, which is headquartered in Norfolk.

Tim Enstice, vice president of legacy gifts at the PETA Foundation and a member of the animal rights organization, agreed with DeMuth live tissue training is outdated and should be phased out.

“It seems like a no-brainer to advance science,” he said.