A feel for a ship: A young sailor rises ranks and into driver’s seat 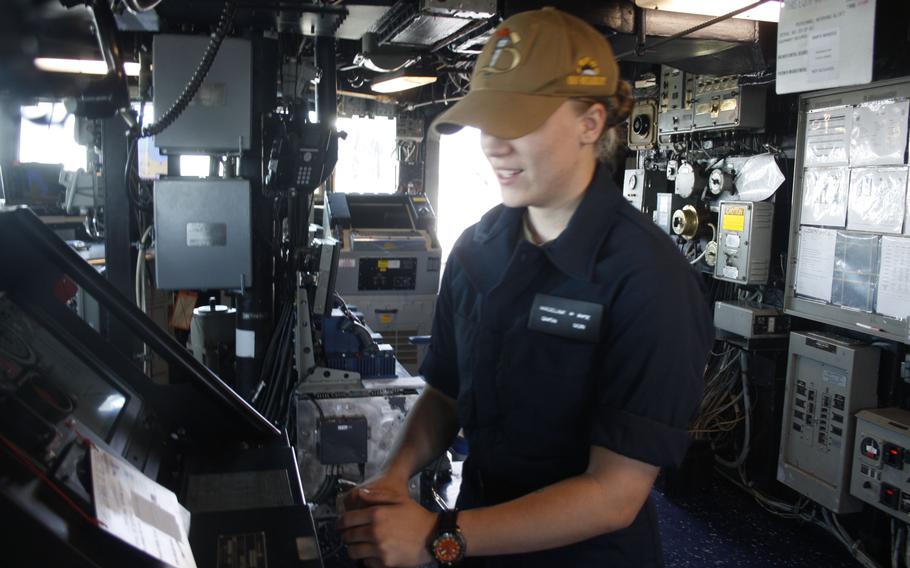 Seaman Madeline Rice-Demick has qualified as quartermaster of the watch and master helmsman on USS Bulkeley. (Dave Ress/Daily Press)

(Tribune News Service) — Steering close to a supply ship while at the helm of USS Bulkeley, Seaman Madeline Rice-Demick could feel the suction created when two ships move on parallel tracks, less than 200 feet apart.

But the conning officer had called out to be prepared — and after stepping up for the training to be certified as a master helmsman, the 20-year-old Michigander with less than a year in the Navy knew what to expect.

“You can feel it” holding the wheel, she said. “It’s like passing a semi- and you feel your car pull toward it, and then when you’re past, feel the car pull away.”

So she knew she’d likely have to steer slightly away — a couple of degrees on the indicator in front of the wheel — and she did, calling out to the conning officer to let her know what she was doing.

And when the conning officer, after checking with sailors on the main deck, warned that the supply ship was about to send lines over and then pull them tight, she was ready to steer to compensate.

Cmdr. Devine Johnson, Bulkeley’s commanding officer, was pacing the bridge — as is his wont on high-risk maneuvers.

“Yeah, you get that nervous feeling in your gut,” before a replenishment at sea, he said. “But then, you know you can trust your sailor.”

He had watched Rice-Demick come aboard the Bulkeley fresh out of boot camp and A-school, arriving just after the destroyer had come out of the shipyard for a modernization and was beginning the months of at-sea training.

And he noticed when she decided to push for the qualification to serve as quartermaster of the watch, a job Johnson said is usually held by a Chief or other senior petty officer. Madeline Rice-Demick, recently qualified as quartermaster of the watch and master helmsman on USS Bulkeley, prepares to take a practice bearing on the bridge. (Dave Ress/Daily Press)

Working with her leading petty officer, Petty Officer 1st class Sainthia Bryant, Rice-Demick practiced interpreting the digital charts on the vessel management system at the quartermaster’s station on the starboard side of the bridge.

She learned how the wind and current indicator screen above one of the central windows of the bridge translated to set — the movement of the Bulkeley away from its desired course — and drift, or how wind and current affected the ship’s speed.

“I wanted to know everything,” she said. When she enlisted, she told her recruiter she wanted to be a quartermaster after she learned that quartermasters are expected to spend 80% of their time on sea duty.

Working with Bryant, she learned about keeping deck and weather logs, about taking bearings, to use her eyes and the Bulkeley’s gyro-mounted scope to check the ship’s position — and to be sure what the digital chart was saying about the ship’s position matched what she was seeing.

She drilled on reading signal flags — those brightly colored pennants that spell out ship-to-ship commands — as well as the searchlight flashing Morse code, both still used when the Navy doesn’t want adversaries listening in.

And, after all that, and earning her quartermaster of watch qualification a long time sooner than usual, she told Johnson she’d like to try for the master helmsman qualification, too.

That’s something Johnson knew about — as a young ensign, assigned to serve as helm safety officer, he made a point to take the extra step and see what it felt like to steer a ship.

“It’s not usually a quartermaster; boatswain’s mates are helmsmen,” he said. “But I think being a quartermaster, she brings something more ... she knows the why, the way wind and current acts, as well as the what of driving the ship.”

Most days, the Bulkeley doesn’t need one of its master helmsmen at the wheel, and relatively young boatswain’s mates usually handle the the work. A destroyer’s master helmsman is the sailor a captain turns to in risky maneuver — a replenishment at sea, transit a strait, leaving or arriving in port, he said.

“But think about it, we have 18- to 19-year-olds regularly driving a $2 billion ship; they are the ones who press the button that launches missiles or fires that gun,” he said nodding toward the 5-inch gun on the front deck.

“When I come up (on the bridge) for a big evolution and maybe make eye contact, maybe nod, at her,” he said, “I know I’ve got a sailor who can do the job.”