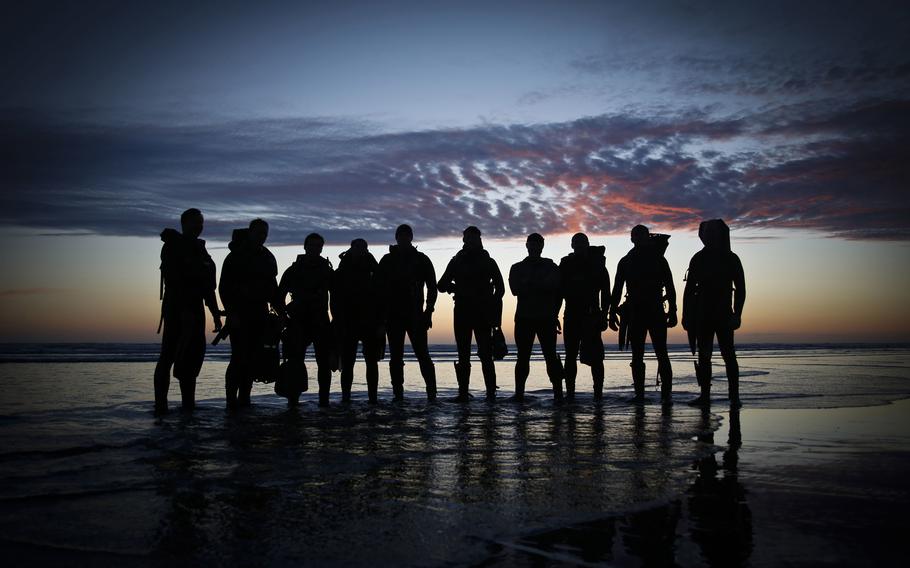 Soldiers with U.S. Army’s 10th Special Forces Group pose for a photo after a maritime training exercise near Astoria, Ore., in 2016. A judge in Washington state sided with public opposition to the Navy using public parks along the Columbia River for SEAL training, but Army Green Berets have trained across the river in Oregon for decades with little public notice. (Connor Mendez/U.S. Army)

Pacific Northwest neighbors Oregon and Washington offer terrain ideal for training special operations troops, but while Army Green Berets have trained in one of those states in recent years, the Navy SEALs have had their plans derailed in the other.

On Friday, a judge in Olympia, Wash., sided with an activist group that had been fighting a decision to allow the Navy limited use of some two dozen waterfront parks for nighttime SEAL training. Group members said they didn’t want the Navy’s “ninjas” creeping around areas reserved for recreation.

The Navy had trained in the coastal recreation sites for more than 30 years, state officials said. But the service paused activities in the face of organized opposition to the renewal and expansion of a five-year agreement that expired in 2020.

Thurston County Superior Court Judge James J. Dixon rescinded permission for the SEAL training, ruling that state law does not give Washington’s parks and recreation commission the power to let parks be used for military purposes.

But about 70 miles southwest of Olympia in Astoria, Ore., at the mouth of the Columbia, Army Green Beret training continued last year with little attention or outcry, just as it has for some five decades, officials told Stars and Stripes.

The coastal terrain and conditions in both states provide valuable training grounds for special operations troops, officials in both services say.

The main difference between the two services’ approach seems to be that the Army coordinates with property owners to use their land and facilities rather than drilling its personnel on state grounds.

Opponents of the Navy’s use of Washington state parks were concerned about SEALs making amphibious landings, carrying simulated weapons and lurking in the dark, which they described as “creepy.” 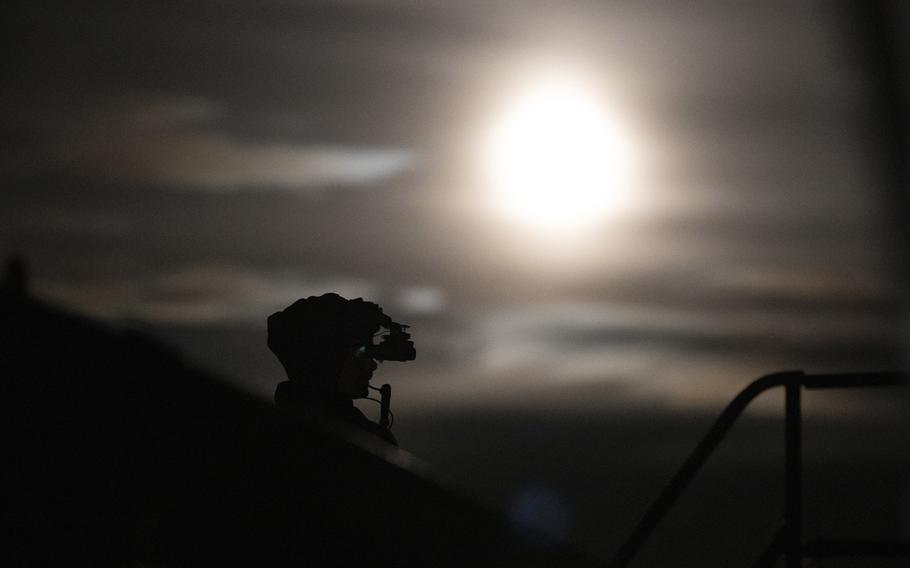 A soldier with 3rd Battalion, 1st Special Forces Group trains near the Columbia River in Oregon, May 26, 2021. A judge in Washington state sided with public opposition to the Navy using public parks along the river for SEAL training, but Army Green Berets have trained on the other side of the river in Oregon for decades with little public notice. (Paul Sale/U.S. Army)

In public comments, many residents said they would stop using the parks as a result.

“That’s a significant adverse impact on recreation, even if the recreational users never see the so-called ninjas in the woods,” Zachary Griefen, an attorney representing Whidbey Environmental Action Network, said in a court hearing that was recorded and shared online.

Griefen said the Navy itself has described the SEALs as “training to be essentially the ninjas.”

At a meeting of the state parks and recreation commission in November 2020, however, Navy Chief Warrant Officer Esteban Alvarado said the SEALs are not “your ‘Rambo’ guys” or the “loud explosion guys.”

In the 1982 movie “First Blood,” starring Sylvester Stallone as Vietnam veteran John Rambo, the former Green Beret battles the military and the police after fleeing into the forest outside the fictional town of Hope, Wash.

The SEALs, Alvarado said, are like ninjas, “the guys who ghost into the environment and they disappear.”

He said Puget Sound’s coastline, cold water and currents provide a challenging environment that can’t be found anywhere else in the continental U.S. and forms a “critical cornerstone” of training them to be undetected.

Astoria, which was the setting for much of the 1985 movie “Goonies,” also has been a frequent stomping grounds for the Army’s goons, as some special operations troops refer to themselves.

The width of the river, the strength of the current and the area’s forested surroundings make for “a premier training experience” that would be “impossible to replicate on any federal installation,” said Maj. Natasha Fultz-Castro, spokesperson for 1st Special Forces Group (Airborne), based at Joint Base Lewis-McChord, Wash.

The conditions challenge the Green Berets’ riverine and marine capabilities with the kinds of difficulties they might face in the Indo-Pacific region, she said in an email.

But their training events are carefully designed to prevent injury or disruption to civilians, Fultz-Castro said, and mostly are held in rural areas or controlled situations. As a result, the Green Berets don’t attract much notice, she added. 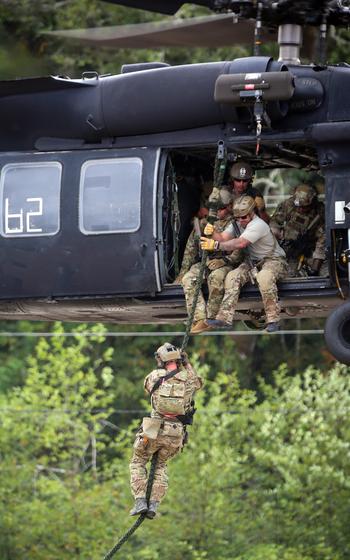 Though 1st Group was shown in Army public affairs photos and videos last year near Astoria conducting helicopter insertions and exfiltrations, both day and night, there appeared to be no local news stories about it.

There also appeared to be little evidence of the earliest Special Forces training in the area, which Fultz-Castro said began when a company of 12th Special Forces Group (Airborne) soldiers returned from Vietnam and created an unconventional warfare training scenario involving Portland and Astoria residents.

One of the few Green Beret activities in the region in the past 50 years that garnered much press was in 1971, when 22 Special Forces members based at Fort Bragg, N.C., ended a four-month trek retracing the Lewis and Clark expedition in rubber rafts.

The group of Vietnam veterans landed in Astoria in September and held a ceremony at Fort Clatsop, a National Park Service historical site near the mouth of the Columbia River.

But against the backdrop of widespread resistance to the U.S. involvement in Southeast Asia, a group of local Democrats passed a resolution denouncing the 3,200-mile trip and the use of tax dollars “to sell the Pentagon and militarism.”

Dixon also evoked domestic political tensions in his ruling against the Navy in Washington state, citing the violent insurrection at the U.S. Capitol on Jan. 6, 2021.

He also referred to Russia’s ongoing war against Ukraine, noting that some Russian troops had said they initially believed that the full-scale invasion launched on Feb. 24 was an exercise.

In light of such events, Dixon held that the state parks commission had failed to consider the “creep factor” of letting the SEALs infiltrate public recreational areas and the effect that would have on enjoyment of the parks.

Naval Special Warfare Command did not immediately respond to a Stars and Stripes query about its training plans or Dixon’s ruling, which could be appealed.