‘An American dream:’ Navy warrant officer retires with 30 years of service that began in the last class of Filipino recruits 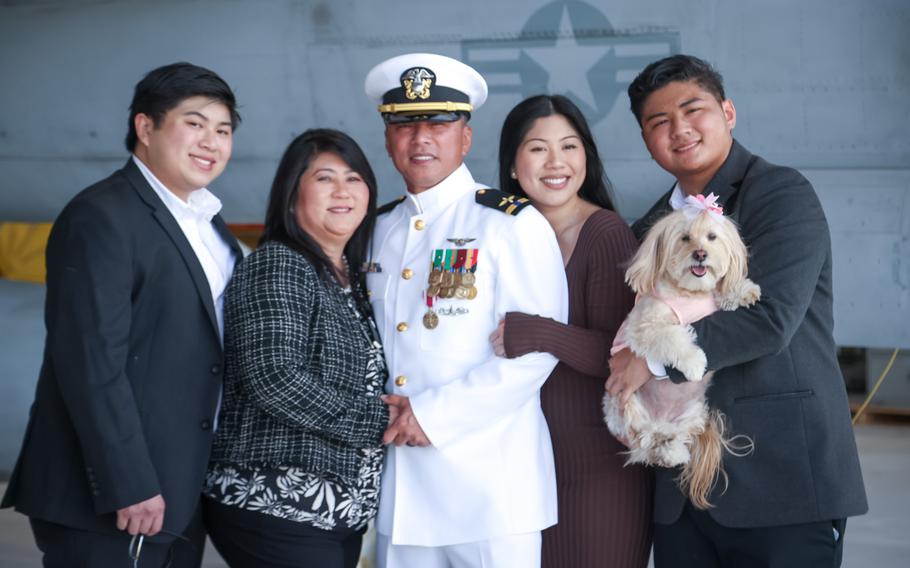 Chief Warrant Officer 4 Jules Amores retired Friday, March 25, 2022, from the Navy after 30 years of service, which began through a now-shuttered recruiting program in the Philippines. Amores is seen here with his family. From left to right is his son Jules, his wife Jennifer, Amores, his daughter Julianne, and his other son Jerrick holding CoCo the dog. (Photo provided by Jules Amores)

Growing up in the Philippines, Jules Amores loved to read about science and medicine, thinking he might become a doctor one day. But he also pined for life in America, which was fueled through copies of the U.S. Navy’s All Hands magazine that his uncle would bring home from his job at the American Embassy.

Amores would pour over photographs of ships and planes, daydreaming about life aboard an aircraft carrier. He never imagined he would one day enlist in the U.S. Navy himself and that his 1992 enlistment ceremony would be featured in that magazine.

“Along the years, I kind of wished I could be there. Life in the Philippines is hard,” he said. “Going to the U.S. has always been my dream.”

Amores, then 21 years old, earned his shot through a competitive recruitment program that enlisted Filipino men into the U.S. Navy. He took the oath on March 13, 1992, as part of the last group to do so. All Hands magazine ran a short article about the program, which began in 1947 and enlisted more than 35,000 Filipino men into the Navy, with the headline, “The last recruits.”

Amores said only the sleeve of his shirt is visible in the far-left edge of the accompanying photo of men with their right hand raised as they recite the oath of enlistment.

Thirty years later, Amores, an aircraft mechanic, retired March 25 as a chief warrant officer 4, and believes he might be the last person recruited from the Philippines program who was still serving on active duty. The Navy couldn’t verify if that is correct.

The retirement ceremony was held at Naval Air Station Lemoore, Calif. Standing by his side were his wife, Jennifer, their three children, Jules, Julianna and Jerrick, and their dog CoCo.

“I’m an example of an American dream. From E-1, I made it to a [warrant] officer, coming from a third-world country,” he said last week as he prepared for the ceremony. “I’m not doing this [ceremony] for myself. I’m doing for my family, and for the Navy as well, to put a spotlight on what it’s done for me and for my family.” 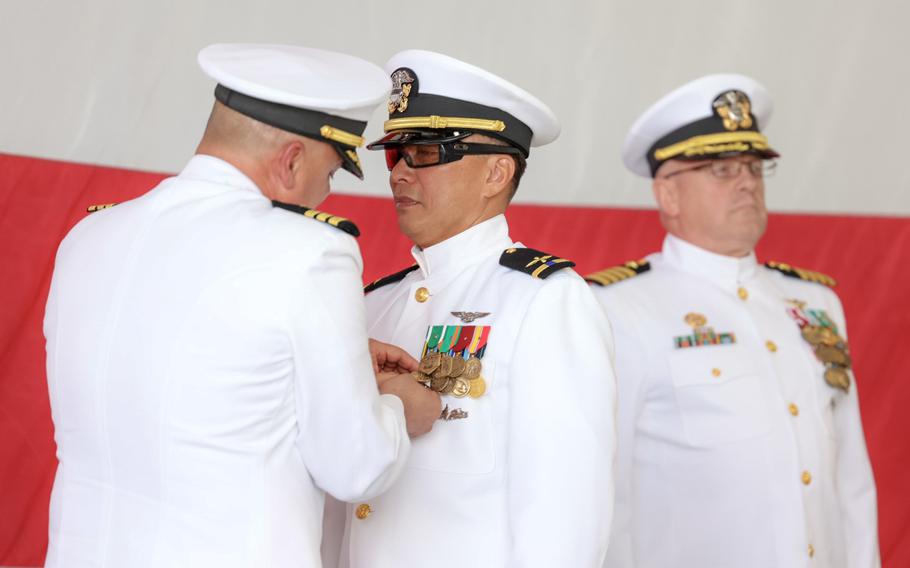 While immigrants legally living in the U.S. can enlist in the military, the Navy’s recruitment of Filipino citizens living in their own independent country was unique, said Chris Capozzola, professor of history at Massachusetts Institute of Technology and author of the book, “Bound by War: How the United States and the Philippines Built America’s First Pacific Century.”

“This was a pipeline for ambitious, young, usually super-talented sailors to enlist directly into the U.S. Navy,” he said.

The only similar program that Capozzola said he has seen among the service branches is the U.S. Army’s ongoing partnership in Korea that allows Korean soldiers to augment American troops. However, they are not direct members of the Army, as the men recruited out of the Philippines were in the Navy.

The partnership developed out of an agreement in 1947 between America and the Philippines that allowed several U.S. military bases to operate on the island. It was a year after the Philippines became independent from the U.S., and there had already been an established history of service dating back to 1901, when President William McKinley authorized up to 500 Filipinos a year to join U.S. forces as part of the Philippine Scouts.

The Philippine islands were then a U.S. territory, and the scouts were considered part of the U.S. Army. The units were disbanded when the Philippines became independent in 1946.

During World War II, Filipino service members were instrumental in supporting American efforts in the Pacific, said Cecilia I. Gaerlan, executive director of the Bataan Legacy Historical Society. The organization was founded, in part, to work with educators to tell the story of Filipino military service, and their impact on the war.

“What [Filipino troops] did between January and April 9, [1942,] was to delay the timetable of the Imperial Japanese Army, which was supposed to take the Philippines in 50 days and they held on for 99 days, despite suffering from massive starvation, disease and fighting without any air support,” Gaerlan said.

That dedication to service inspired generational military service for many Filipinos, she said.

“We're not talking just about a few, but several generations have served and are continuing to serve not just the Navy, but the U.S. armed forces, because of this tradition,” Gaerlan said. “Filipinos take great pride in serving in the armed forces.”

Initially following World War II, the Navy’s program only allowed Filipinos to serve in service roles, such as cooks and stewards for officers, mainly because they couldn’t get the necessary security clearance for other jobs, Capozzola said. It didn’t draw huge numbers until about the time of the Korean War and the expansion of U.S. military bases in the Philippines.

In the 1970s, the Navy began to allow Filipinos to serve in more job positions, which might have also played a role in the program’s increasing popularity, he said.

In return, Filipino sailors have also influenced the Navy. Pancit, a traditional noodle dish from the Philippines, is commonly prepared on Naval ships, Capozzola said.

“It's hard to find a U.S. Navy sailor who hasn't eaten pancit,” he said.

The Navy also manages the White House Mess, a small dining facility in the basement of the West Wing, and many Filipino sailors have earned a spot this high-profile kitchen.

“One of the first people that every American president in the 20th century saw when he woke up in the morning, was a Filipino sailor,” Capozzola said. “That's huge, and far out of proportion to the number of Filipinos who serve.” 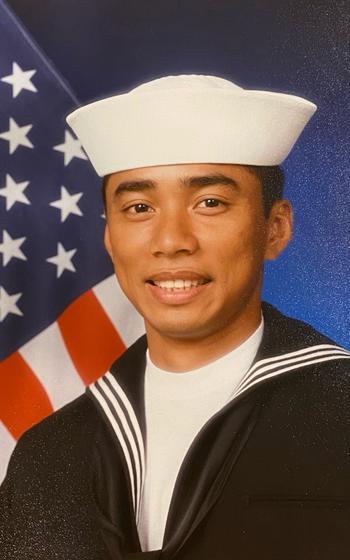 Jules Amores, seen early in his career, enlisted in the Navy on March 13, 1992, as part of the last group of recruits to participate in a program that brought more than 35,000 Filipino men into the U.S. Navy. He retired Friday, March 25, 2022, after 30 years of service. (Photo provided by Jules Amores)

By the time Amores looked to enlist in the Navy, it had become highly competitive, with about 250 men applying for each of the 400 slots available per year, according to an LA Times article published in 1992 about the end of the program.

During his first year of college in 1988 in Cebu, Amores and his brother decided to apply. They responded to a small, classified ad in the newspaper that instructed them to send in a 2x2 photograph of themselves with specific information written on the back.

And then they waited.

About a year later, Amores’ older brother got called to report for testing, but didn’t make the cut. Amores finally got a call more than six months later, arriving to the base with thousands of other men. After a test weeding out many of the applicants, he said he then had to be interviewed.

Amores had attended an English-language high school and worked part-time as a radio DJ, playing rock music for two hours in the evenings. He said he believes his language skills helped him through the interview process to earn a spot among the final 10 that day. He was scheduled to come back later to continue the vetting process.

But in June 1991 the volcano Mount Pinatubo erupted, devastating much of the Philippines, and closing the roads to Subic Bay, the Navy base handling Amores enlistment.

“Our process stopped for almost a year,” he said.

Eventually, Amores made it back, and after more testing and interviews, he was able to enlist on March 13, 1992. The group of 29 men were the last Philippine citizens to enlist through the program, according to the All Hands magazine article.

“It only took about a minute, but a single oath ended a 92-year U.S. Navy program that was like no other,” the article stated.

In the months that followed, the Philippines ended the base agreement with the U.S. military, which closed Subic Bay. However, it remains a functioning base under the Philippines navy and an important site for visiting U.S. personnel, Capozzola said. The end of that agreement is also what brought an end to the enlistment program.

But for Amores, the story continued. He earned recognition in basic training, which allowed him to select a rating, he said. He chose structural mechanic for aircraft, and took every opportunity that he could to serve at sea.

When he boarded an aircraft carrier for the first time, the USS Kitty Hawk, the moment brought to reality what he had dreamed about as a child.

“It was a different feeling because you used to just be watching this huge, extraordinary machine that floats in the ocean,” he said. “Now you're actually on it. I was happy, but at the same time I had anxiety of what to expect.”

Over time, Amores climbed the enlisted ranks to senior chief petty officer and earned his American citizenship, a bachelor’s degree and a master’s degree. He commissioned as a warrant officer, serving in his final days as Lemoore’s site leader of the Naval Aviation Technical and Engineering Command.

While he will miss the Navy, retiring after 30 years, “that should be enough,” he said. “It’s been a long time coming. I had fun. I had some bad experiences and good experiences as well. It’s all up to how you face the challenges of the military, being away from family and stuff like that.”

Amores plans to stay in the Lemoore area and take some time to decide on his next chapter in life. In the meantime, he plans to dedicate more time to a group he founded, the Filipinos of Kings County. Like other areas around Navy bases, there is a sizeable community of Filipinos living in the county, he said.