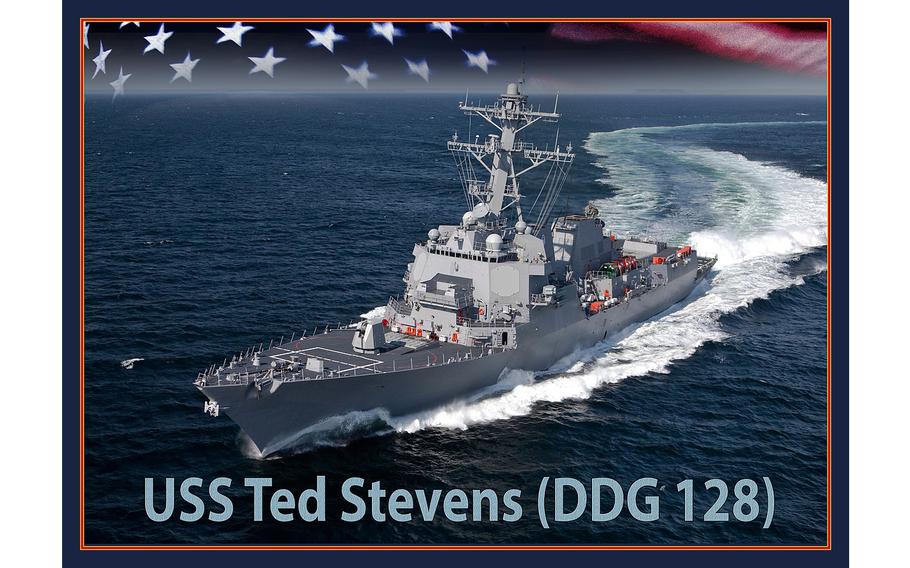 The ship is named in honor of former U.S. Sen. Ted Stevens, a World War II pilot who was elected to the Senate in 1968 from Alaska. (U.S. Navy photo illustration)

The ship is named in honor of former U.S. Sen. Ted Stevens, a World War II pilot who was elected to the Senate in 1968 from Alaska. When Stevens left office in 2009, he was the longest-serving Republican senator in history. Sen. Orrin Hatch of Utah surpassed Stevens’ record in 2017.

Wilkinson was joined at the ceremony by the senator’s wife of 29 years, Catherine Stevens; his eldest daughter, Sue Stevens Covich; and by his granddaughter, Laura Sexton, who represented his youngest daughter, Lily Stevens-Becker, who could not attend.

“Each one of these women has a unique connection to our ship’s namesake,” Wilkinson said, “and we are grateful that each of them accepted the important responsibility of sponsor. Ingalls shipbuilders welcome them as part of our extended family and we will work steadfastly together to build the legacy of this public servant.”

A letter jointly composed by the Stevens family noted Stevens would want the focus on those who built and will serve on the ship, not himself.

“Most important,” the letter read, “is to acknowledge the men and women who will serve on USS Ted Stevens, as well as every person who is building this ship. Dad spent many years ensuring that the service has the advanced technology needed to keep our country and service members safe. This ship will carry on that legacy.”

The sponsors joined Ingalls welder Henry Johnson as he welded their initials onto a steel plate and then announced that the keel of DDG 128 had been “truly and fairly laid,” a longstanding shipbuilding tradition.

Stevens served as a pilot in the U.S. Army Air Corps (the forerunner of the Air Force) during WWII. Stevens was assigned to the China- Burma- India theater with the Fourteenth Air Force Transport Section, which supported the famed “Flying Tigers” fighter group, from 1944 to 1945.

Stevens would earn the Distinguished Flying Cross for flying behind enemy lines during the war. Ironically, after surviving the war and living to the age of 86, Stevens died in a plane crash in August 2010 en route to a private fishing lodge in Alaska. He is buried in Arlington National Cemetery.