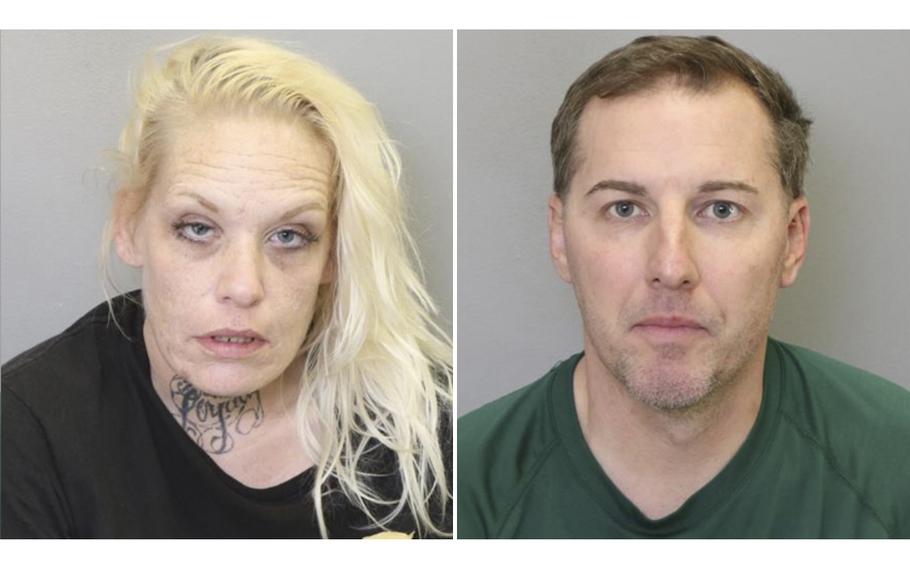 Heather Totty and Jason Jablonski, a U.S. sailor, have been arrested in connection with a March 11, 2022, murder in Virginia Beach, Va., (Virginia Beach Sheriff’s Office)

(Tribune News Service) — A U.S. Navy sailor charged in the Friday killing of a Virginia Beach man was on a “crack bender” and used a dumbbell to kill the man, according to police and court documents filed in the case.

Jason Jablonski, 41, of Virginia Beach, is one of two people charged in connection with the death of 45-year-old Herbert Bryant. Authorities found Bryant dead Friday morning when they were called to a residence in the 1200 block of Edenham Court, near Indian River Park and the Chesapeake city line, at 7:31 a.m. Friday.

Court records indicate Jablonski, who appeared in Virginia Beach District Court for arraignment Monday, has been in the Navy 12 years. He is charged with second-degree murder.

Heather Totty, 35, of Virginia Beach, is charged with accessory to murder after the fact.

A bail determination sheet filed in court said Jablonski was on a “crack bender” and got into a fight with Bryant inside a residence. During the fight, the court documents say he hit Bryant in the face with a dumbbell and then pushed it down on his neck until he stopped moving.

Totty was present when the altercation happened and afterward, she helped Jablonski drag the body outside, the court documents state. Jablonski fled to a hotel. Totty attempted to clean up the residence afterward, and gathered Bryant’s things, which authorities later found in a dumpster.

It was unclear how Jablonski, Totty and Bryant all knew one another or who reported Bryant’s death.

Both Totty and Jablonski were ordered held without bond until a bond hearing scheduled for Thursday.

Jablonski has hired attorney Eric Leckie and Totty will be represented by a public defender.