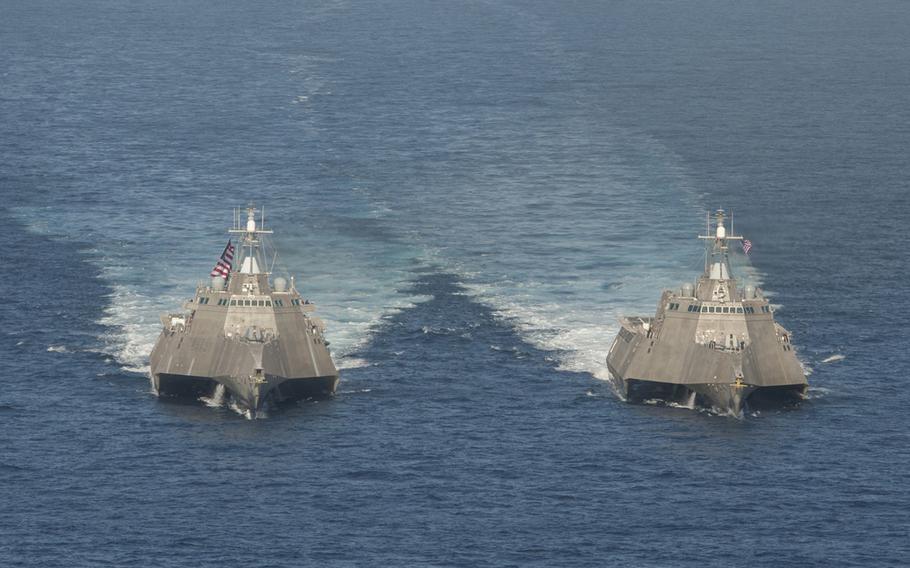 The small ships designed to operate in shallow coastal waters have been plagued by operational and maintenance problems, criticized as vulnerable to attack and downgraded from an original vision of versatile vessels with Lego-style modular units that could be swapped out for different missions. (Keith DeVinney/Navy)

The U.S. Navy’s troubled fleet of Littoral Combat Ships has “not yet demonstrated the operational capabilities it needs to perform its mission,” congressional auditors have found almost 14 years after the first vessel was delivered and more than $31 billion has been spent.

More than $3 billion of that has gone toward the Navy’s estimate that operating and maintaining the ships will cost at least $60 billion over 25 years. But that projection is outdated and incomplete, the Government Accountability Office said in a report issued Thursday.

What Navy leaders once touted as a 55-vessel fleet of $220 million ships has dwindled to a planned 35 costing on average $478 million apiece. It’s built in different versions by Lockheed Martin and the U.S. unit of Austal.

The small ships designed to operate in shallow coastal waters have been plagued by operational and maintenance problems, criticized as vulnerable to attack and downgraded from an original vision of versatile vessels with Lego-style modular units that could be swapped out for different missions.

“Operational testing has found several significant challenges, including the ship’s ability to defend itself if attacked and failure rates of mission-essential equipment,” the auditors said.

The GAO produced its report in August under a label of “Controlled Unclassified Information” that was dictated by the Navy and had been negotiating with the service ever since for the version made public Thursday.

Although the Navy is truncating production of Littoral Combat Ships in favor of a new frigate, those already commissioned or being built will help meet the numerical goal for a larger Navy fleet. Admiral Michael Gilday, chief of naval operations, last week announced a goal of a 500-vessel fleet, up from about 296 today.

The “LCS is in that mix,” he told reporters at a West Coast conference last week, according to USNI News, a trade publication.

But the vessels still have numerous challenges to overcome.

After an extensive review in 2016, the GAO said, the Navy “has begun to take steps to address some of these issues, but it does not have a comprehensive plan to address the various deficiencies identified during testing and deployments.”

The ships “continue to have unaddressed problems that hinder the ability of the LCS to carry out its operational and warfighting capabilities,” according to the report.

The bill for maintaining the vessels threatens to eat into Navy shipbuilding, the GAO said. “While acquisition costs have been significant, operating and support costs make up approximately 70% of total program lifecycle costs of Navy ships,” the auditors said. “The Navy has already spent at least $3.3 billion to operate and support 17 LCS since 2008.”

The Navy must update its $60 billion operations and maintenance estimate, which was calculated in 2019 dollars, so it has a realistic, current “life-cycle” program cost, the GAO said.

The Navy is “appreciative of the independent review, evaluation, and recommendations provided by the Government Accountability Office,” the service said in a statement. “We look forward to our continued partnership with the GAO as we work towards a common goal of delivering capability to our warfighters so they are ready to compete, fight and win whenever and wherever needed.”