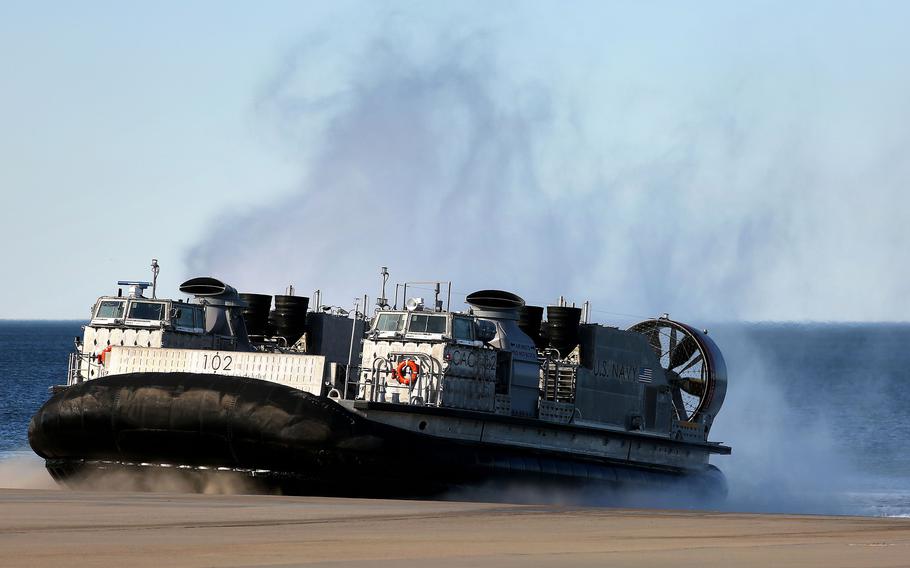 LCACs 101 and 102 return to Little Creek Amphibious Base on Friday, Feb. 11, 2022, after extensive testing of the new and improved 100 series crafts. (Stephen M. Katz, The Virginian-Pilot/TNS)

(Tribune News Service) — You can feel the differences in the Navy’s newest hovercraft when the pilot moves the L-shaped throttle handle at his or her left hand forward, and the LCAC-100 speeds away from the well deck of an amphibious ship at 35 knots.

“It just pushes you back into your chair,” said Petty Officer 1st class Jacob Juberville, who’s responsible for the engines as flight engineer on one of the first two LCAC-100s — “landing craft air cushion,” Navy-speak for the hovercraft that skim just above both water and beach to land Marines and their equipment on hostile shores.

Delivering the two newest LCACs to Assault Craft Unit 4 next to the beach at Joint Expeditionary Base Little Creek-Fort Story, the five-strong team of enlisted sailors who run each demonstrated a key feature — hovercraft can move over the line between water and land without a bump. Traditional landing craft stay in the water, lowering a ramp that lets Marines and their vehicles roll ashore, hopefully without getting wet.

ACU-4 sailors on the new LCAC-100s last week completed one of the tests needed before the Navy formally took delivery of the vessels, seeing how they managed leaving and returning from the Little Creek-based USS Carter Hall.

“They ran on and off a lot,” said Capt. Tony DeFrias, ACU-4′s commanding officer, after watching LCAC-101 and LCAC 102 make the 6-mile run from off Cape Henry, where the Carter Hall dropped them off, to Little Creek.

“Now our job is getting familiar with them, operating and maintaining them.”

For pilots such as Senior Chief Eric Smith, riding on a cushion of air still demands coping with wind and currents to keep on course just like conning officer, and the boatswain’s mates at the wheel and engine controls on a carrier or destroyer do.

“But you do that at 35 knots,” he said. Pilots have to react quickly — the Navy’s other landing craft travel at top speeds of no more than 11 knots.

When pilots, who sit in the starboard (right-hand) seat on the small starboard side cabin, climb up the vertical ladder and settle into place, they control the LCAC-100 with a joystick in their right hand and the L-shaped throttle.

They use the LCAC’s two funnel shaped bow thrusters, mounted high above its air intakes, and the set of vane-like rudders behind its two 12-foot-diameter propellers to steer it. They also must manage the air blowing through its 5-foot-across lift fans to keep the hovercraft at a safe height to efficiently move above the surface.

Keeping all that roaring and constantly-vibrating machinery — ear plugs are strongly recommended when on or around an operating LCAC — tuned up and properly balanced is part of the mission for ACU-4′s sailors, and learning their way around the new LCAC-100s will be a key task, added to their usual job of being ready to move at a moment’s notice, DeFrias said.

The new LCAC-100s’ four gas turbine engines are laid out differently than on the Navy’s older models, and that means it needs only two gearboxes instead of eight, Juberville said. That makes some of his work as engineer less complicated, but he and his fellow sailors need to understand the new electrically powered mechanical systems that replace older LCAC’s hydraulics.

But the key for ACU-4 sailors, who come to the unit with a variety of ratings — Smith is a gas turbine tech, Juberville an aviation electrician — is learning to manage a craft unlike any other.

“They call it flying,” said Capt. Scott Searles, who has been leading the LCAC-100 program. “Most of the time on ships we’re going over the water slowly enough to see and react; these are flying at 35 knots.”

“You got to have reflexes,” Smith said.