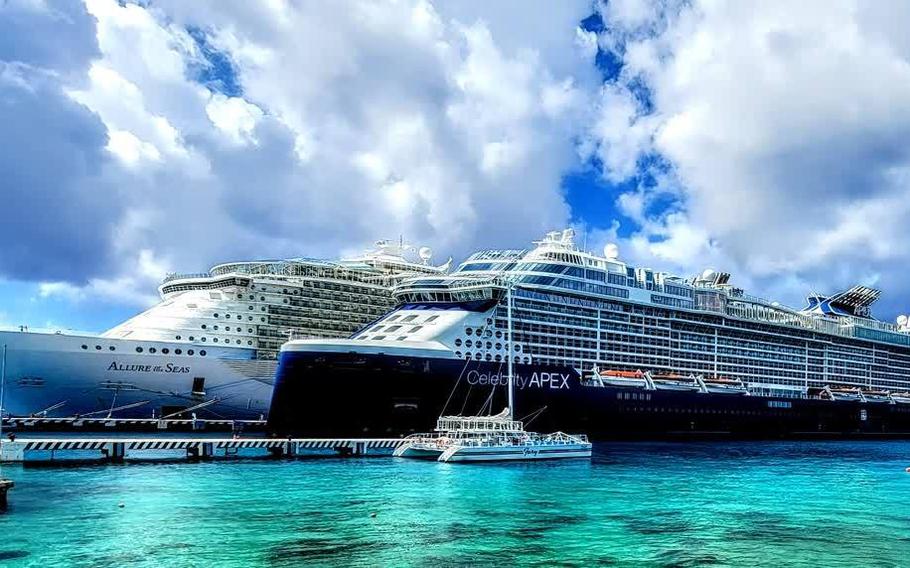 A Celebrity cruise ship that stopped in Key West over the weekend jutted out into a passageway used by the Navy. And Naval Air Station Key West says the ship partially blocked the entrance to the Navy’s Truman Harbor. (Facebook)

KEY WEST, Fla. (Tribune News Service) — This was more than a monster truck trying to squeeze into a compact parking space.

A Celebrity cruise ship that stopped in Key West over the weekend jutted out into a passageway used by the Navy. And Naval Air Station Key West says the ship partially blocked the entrance to the Navy’s Truman Harbor.

By exceeding the boundary line, the 1,004-foot Celebrity Apex’s mooring was more than a bad parking job at the privately run Pier B.

“Any activity that restricts or prohibits vessel transit in or out of the Harbor impacts our defense mission capabilities there,” said Trice Denny, a spokeswoman for Naval Air Station Key West.

“The violation is that it’s past the boundaries of the submerged land lease in the deed and it juts out into the opening into Truman Harbor,” Denny said. “We need all that opening space to safely maneuver vessels in and out of the harbor.”

The Naval Air Station said it has drafted a notification of the violation to the Florida Department of Environmental Protection, which has a lease with the dock’s private owner, Pier B Development Corp., that allows cruise ships to dock.

The notice is working its way through the Navy’s administrative process.

“The next step is up to the state,” Denny said.

Representatives of the state Department of Environmental Protection did not respond to emailed messages on Wednesday seeking more information and comment.

Asked about the mooring incident, a manager for Pier B said that it “followed up to correct any issues on docking location.”

“We have a good working relationship with the city, Navy and harbor pilots,” Tom McMurrain, manager of Pier B, said in a statement. “The harbor pilots bring in cruise ships as well as some of the Navy vessels so we all work together in the Harbor to insure the proper docking of ships.”

Cruise critics in Key West seized the chance to denounce Celebrity over the mooring controversy, which happened the day after a protest at Mallory Square to greet the arrival of another ship, the Celebrity Constellation.

Some posted photos of the Apex’s mooring, including Safer Cleaner Ships, the group behind three referendums that easily passed in 2020 to drastically restrict cruise ship traffic to the island — including banning the largest ships altogether.

But state legislators put a stop to those changes. In June 2021, Florida Gov. Ron DeSantis signed legislation that overturned the voters’ decision.

Those voters want the city and Pier B to stick to the terms of the referendums: Ban cruise ships with more than 1,300 passengers from docking in Key West and limit the total number of people, both passengers and crew, who can disembark each day to 1,500.

This week, in light of the Apex’s mooring, Safer Cleaner Ships asked the U.S. Army Corps of Engineers to immediately suspend cruise ship docking at Pier B and to revoke the permit it granted to the company.

The arrival of the Apex, which can carry 2,910 passengers, is part of a pattern, the group says. They have rounded up a list of 350 violations of the lease’s limits on ship length and width between 2016 and 2022. The list includes upcoming scheduled ships.

Pier B has accepted the most cruise ships in Key West since the cruise industry resumed business last year after the industry shut down in March 2020 due to the COVID-19 pandemic.

Some of the ships at Pier B do qualify under the referendum’s limits, Arlo Haskell, a founder of Safer Cleaner Ships.

“They’ve been busy,” Haskell said of Pier B. “They’ve had a number of smaller ships that qualify but lately they have been bringing in these giant ones. If the Corps takes the action they’re required to do by permit, it will shut down cruise operations at Pier B.”

On Saturday, the day before the Apex moored at Pier B, a few hundred people turned out to protest large cruise ships docking in Key West, two years after the Key West referendum vote.

Some held handmade signs: “Save our reef,” and “KW voted no.” One man held one that read, “Floating toilets go away.” The square was filled with large flags bearing the blue, white and yellow Safer Cleaner Ships logo.

Cruise ship critics also took to the water on boats. During the protest, the 965-foot Celebrity Constellation loomed large as a backdrop, docked at Pier B. No elected officials were seen at the protest.

“There’s no politician, there’s nobody coming to our rescue in the Florida Keys,” said Will Benson, a flats fishing guide and a founder of Safer Cleaner Ships. “I’ve been working these issues for a long time and they don’t care.”

Who owns the pier?

Key West is home to three piers that can accept cruise ships, and the city manages two of them.

Pier B is owned by the Walsh family of Delray Beach, along with the Opal Key Resort and Marina behind it facing Front Street. Pier B leases from the state the bay bottom below the saltwater.

“The pier is privately owned, yes,” said Phillip Nguyen, a geographical information systems specialist for the Monroe County Property Appraiser’s Office. “They lease the bay bottom from the government.”

There is a submerged land lease in place between the company and the state, meaning the bay bottom. Two companies with Pier B in their names are recorded legally as the warranty deed holders.

Mallory Square, which the city owns, is next door. The city has also leased the Navy’s Outer Mole pier to bring in cruise ships.