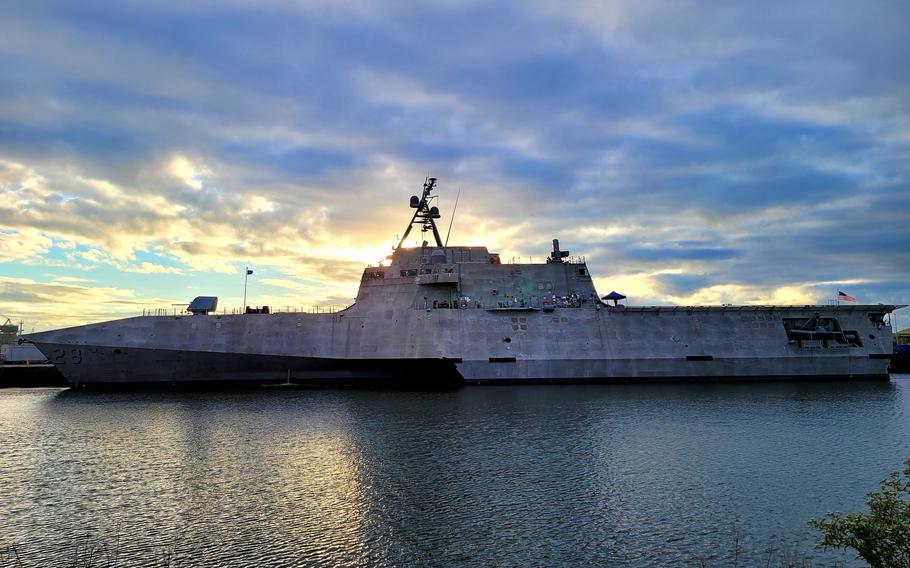 The Independence-class littoral combat ship USS Savannah will officially be brought to life during a commissioning ceremony Saturday at the Port of Brunswick. (Facebook)

BRUNSWICK, Ga. (Tribune News Service) — The Navy’s newest boat, USS Savannah, will officially be brought to life during a commissioning ceremony Saturday at the Port of Brunswick.

Ray, who has served in the Navy 17 years, said it’s the first time he has served aboard a vessel for its commissioning. He said the crew is as excited as he is.

The Savannah is described as a fast, agile and focused-mission platform designed for operation in near-shore environments, yet capable of open-ocean operation. It is designed to defeat asymmetric “anti-access” threats, such as mines, quiet diesel submarines and fast surface craft.

Ray said the Savannah will be home ported in San Diego after it leaves Brunswick.

The ship is new, but Ray said the crew has trained hard and they are prepared for the new duty assignment.

“Our sailors know what to do and how the ship will react,” he said.

The boat will have two crews that will alternate deployments lasting around six months, Ray said.

When crew members are not at sea, they will be training and taking leave time.

Some of the crew of 70 sailors will also have earned their Naval Surface Warfare Specialist pin, a process that takes about 18 months. The designation shows a sailor is familiar enough with most of the ship’s systems and can take over in an emergency. One of the important skills everyone trains on is firefighting because of the threat a fire poses to a vessel at sea.

During a tour of the boat Thursday, Ray explained how the high-tech equipment makes the Savannah a formidable platform at sea.

The boat also has a flight deck larger than those on Navy destroyers. There is room inside the ship to house a helicopter.

The ship has a top speed of more than 40 knots and can serve in a strike group or on its own in different environments across the globe.

The original plan was for the commissioning ceremony to be held in the ship’s namesake city, but the Port of Savannah has a backlog of cargo ships so the ceremony was relocated to Brunswick. But that doesn’t mean the city is being ignored.

Ray said members of his crew have attended events in Savannah to commemorate the commissioning, and the city will be well represented at Saturday’s invitation-only ceremony. The ceremony begins at 9:45 a.m. and will be shown live online at dvidshub.net/webcast/27899.