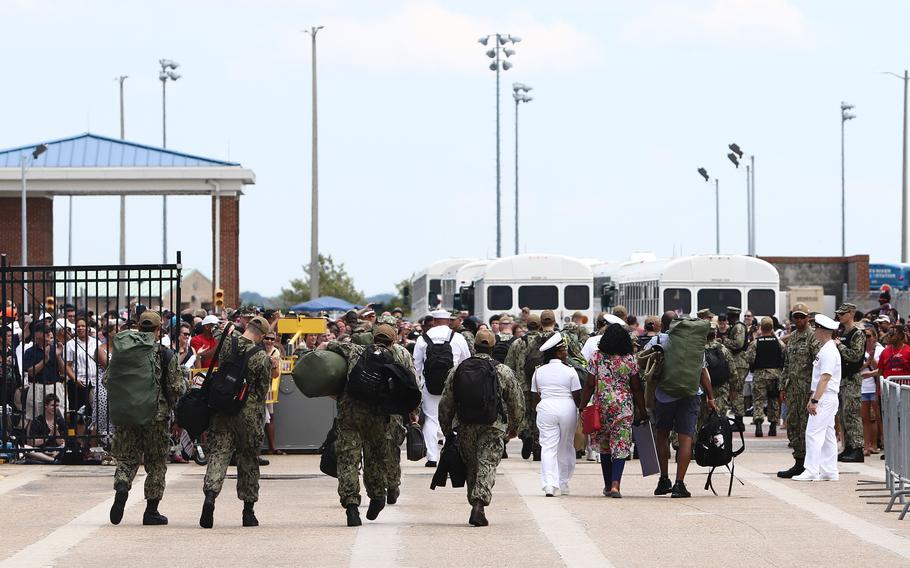 Sailors walk off of Naval Station Norfolk's Pier 14 into a crowd of families after the USS Dwight D. Eisenhower returned from a five-month deployment on Sunday, July 18, 2021. (Trent Sprague, Daily Press/TNS)

The decline is almost entirely due to a nearly 21% drop in purchases of goods and services at the region’s six naval installations, including construction, maintenance and repair, from $3.1 billion to $2.5 billion.

The COVID-19 pandemic also reduced spending on civilian contractors and civilian employees, particularly meals and entertainment staff whose jobs aren’t funded by Congress. Their business on Navy bases closed or cut hours of operation because of the pandemic.

Offsetting those declines partly were increases of $154 million for active duty personnel payroll, which totaled $6.3 billion, and $52 million in benefits for retired military and survivors, which totaled $2.67 billion.

Travel reimbursements rose $24 million to $121 million, as the pandemic meant some sailors were put into a restriction of movement status to help stop the spread of the virus. That required temporary housing and meals.

The number of active duty Navy and Marine Corps personnel rose by about 800 to 89,604. The number of ships and aircraft squadrons also did not change.

Retiree and survivor numbers were basically unchanged at 84,793, and military family member numbers rose by about 400 to 98,288.

“This report shows that even during a global pandemic, the Navy is a source of economic stability in Hampton Roads,” said Rear Adm. Charles Rock, Commander, Navy Region Mid-Atlantic.

“We were able to take extra health and safety precautions to keep our personnel and our community safe, while also adapting to keep our ships sailing and our aircraft flying,” he added.