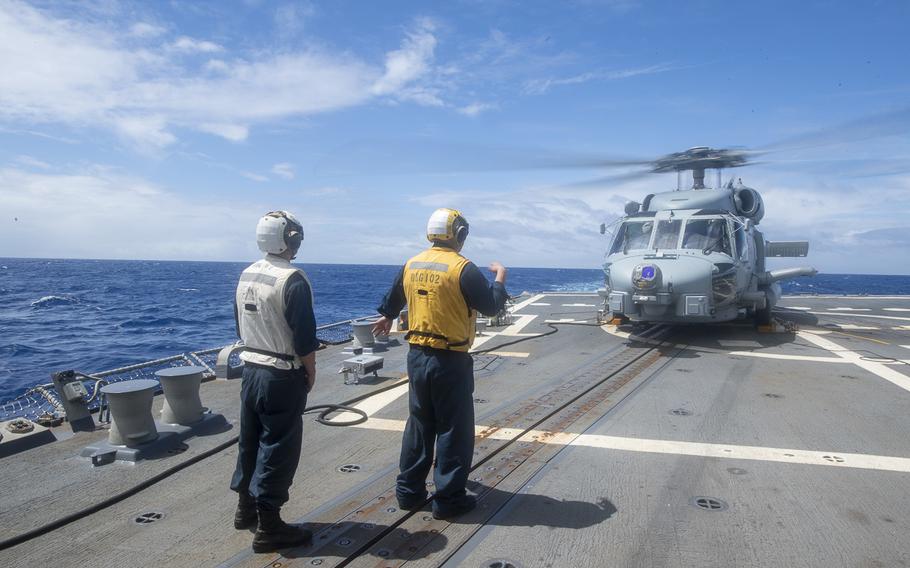 The guided-missile destroyer USS Sampson is continuing to assist with disaster assessment and relief efforts for the remote islands of Tonga ravaged by a volcanic eruption and tsunami.

The ship arrived in the vicinity of Tonga on Wednesday, five days after the eruption, Capt. Kyle Raines, a spokesman for U.S. Indo-Pacific Command, said in an email Monday.

Over the weekend, an MH-60R Seahawk helicopter from the Sampson assessed damage to the isolated islands of Niuafo’ou, Fonualei, Ofu and Fonuafo’ou, Raines said.

The destroyer has joined ships and aircraft from France, Australia, New Zealand, Japan and others in delivering water, food and other relief to Tonga.

The undersea eruption of the Hunga-Tonga-Hunga-Ha'apai volcano sent tsunami waves across the Pacific Ocean and a massive amount of ash into the air.

The eruption was larger than any nuclear detonation ever recorded, the Comprehensive Nuclear Test Ban Treaty Organization, which monitors atomic tests, said over the weekend.

The tsunami severed the only fiber-optic cable that connects Tonga to the rest of the world.

A layer of thick, volcanic ash covered many of the 169 islands that make up the Kingdom of Tonga, which lies about 1,000 miles east of Australia.

Only 36 of those islands are inhabited, with roughly 70% of the Polynesian nation’s population of 105,000 living on the main island of Tongatapu.

The Sampson is part of the Abraham Lincoln Carrier Strike Group, which deployed from San Diego early this month.

At the time of the eruption, Sampson was at American Samoa, about 600 miles northeast of Tonga.