USS Kitty Hawk, one of the Navy’s last fossil fuel-powered carriers, sails for the scrapyard One of the United States’ last aircraft carriers powered by fossil fuels departed Washington state on Sunday, beginning its final journey before being scrapped.

Aided by tugboats, the decommissioned USS Kitty Hawk left Naval Base Kitsap in Bremerton on a trip that will conclude at a ship-breaking facility in Brownsville, Texas, according to a Facebook post Monday from Navy Region Northwest.

Former Kitty Hawk crewmember Jim Jursinic, who served aboard the carrier between 1996 and 2000, said he was sad to see it go.

“When you live and breathe this ship for four years, it becomes a part of you,” he told Stars and Stripes over social media on Wednesday.

The vessel will be delivered to International Shipbreaking Limited, which purchased the Kitty Hawk and another decommissioned carrier, the USS John F. Kennedy, in October for 1 cent each, according to an Oct. 3 report from USA Today.

Towing and ship-breaking are costly endeavors, and the Brownsville firm has in the past received “large payments” from the Navy to recycle its vessels, according to an Oct. 4 report by the Brownsville Herald.

"The contract values reflect that [International Shipbuilding Limited] will benefit from the subsequent sale of scrap steel, iron, and non-ferrous metal ores," a spokesman for the Naval Sea Systems Command, Alan Baribeau, said in the report. 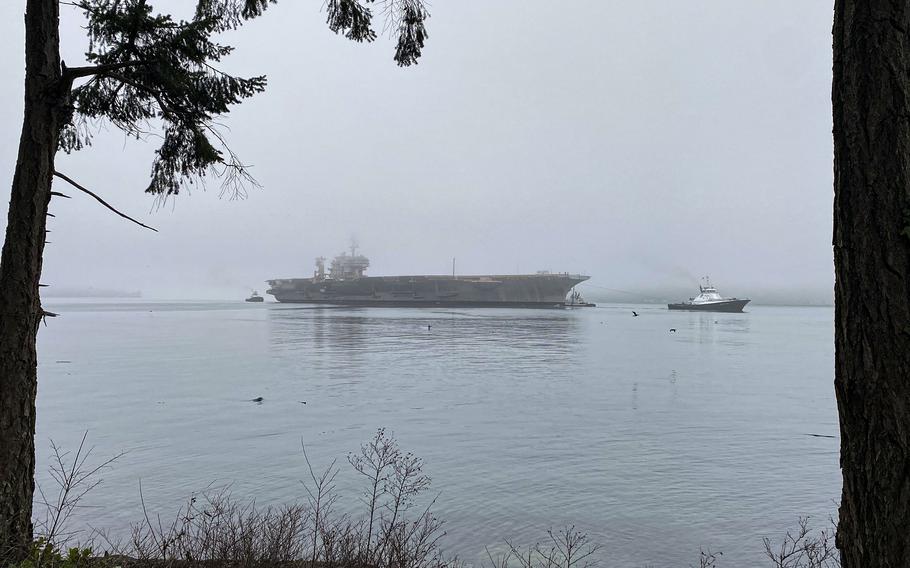 Navy tug boats support the decommissioned USS Kitty Hawk as it departs Naval Base Kitsap in Bremerton, Wash., Jan. 15, 2022. The carrier is bound for a shipbreaking facility in Brownsville, Texas. (Heather Wamsley/U.S. Navy) 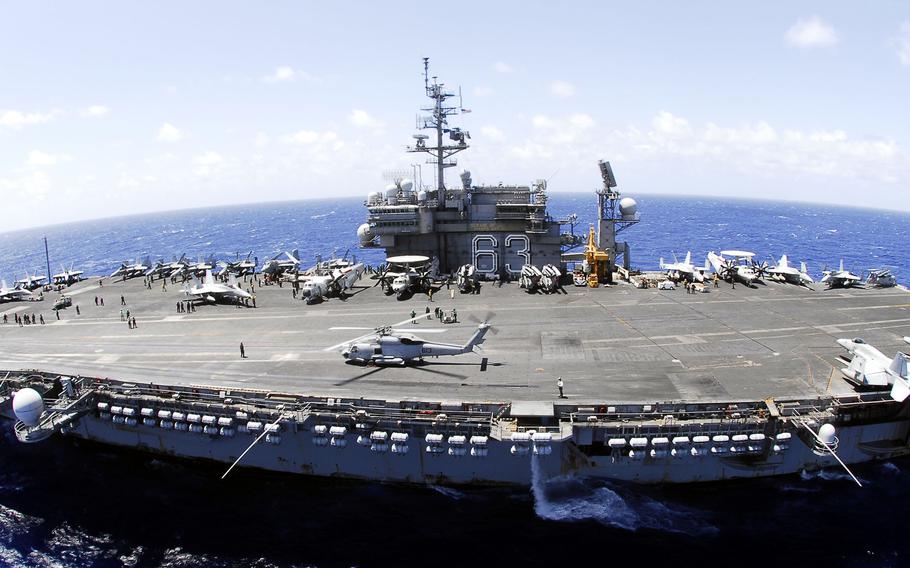 Commissioned in 1961, the carrier was one of three Kitty Hawk-class carriers to serve in the Navy. The others were the USS America and USS Constellation, which went out of service in 1996 and 2003, respectively.

The Kitty Hawk was propelled by steam turbines powered by eight boilers that burned fuel oil, converted in 1973 to a lighter diesel fuel, according to Globalsecurity.org.

Coming into service during the Vietnam War, the ship participated heavily in the conflict.

Between 1965 and 1972, aircraft embarked on the carrier flew more than 41,000 strike, combat or support sorties, according to the Naval History and Heritage Command website.

In the span of just two months, between December 1967 and February 1968, the Kitty Hawk’s aircraft flew more than 5,000 sorties that “ranged the length of North Vietnam,” according to the website. The ship supported aircraft such as the F-4 Phantom II and F-8 Crusader fighter jets and the E-2 Hawkeye early warning aircraft.

The ship’s Vietnam War service record included conflict below decks. Between Oct. 11 and Oct. 13, 1972, strife between Black and white sailors erupted aboard the ship. Officially, 47 were injured, according to Naval History and Heritage Command.

In the decades following the Vietnam War, the Kitty Hawk deployed multiple times, including in support of Operation Restore Hope off Somalia’s coast.

In 1987, the ship returned to a Philadelphia drydock, where it underwent a $832 million life extension overhaul that kept it in service another 22 years.

In 1998, the ship relocated to Yokosuka Naval Base, Japan, home of the 7th Fleet, where it remained for the next decade. The Kitty Hawk participated in Operations Freedom, Southern Watch and Iraqi Freedom during that period.